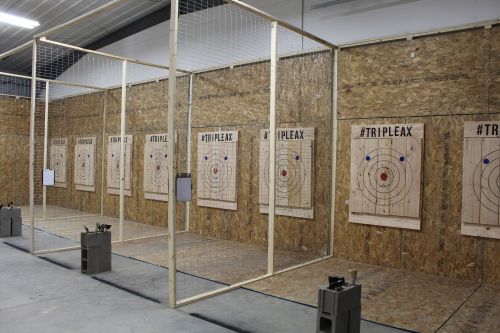 Marcel Baumgartner and her boyfriend, Erik Kalberg, took an anniversary trip to Minneapolis in November and came back with a crazy idea – to open Fargo’s first ax-throwing range. Four months later, they opened Triple Ax in south Fargo.

“We kind of did [ax-throwing] as an anniversary thing and we fell in love,” Baumgartner said.

She said that after they finished throwing, they suggested to the owners of the range that they should open a range in Fargo. That approach didn’t seem promising, so they knew they had to take matters into their own hands.

Baumgartner said when they came back with their idea, they soon discovered they may not be the only people looking at opening an ax-throwing range.

“These are popping up all throughout the country,” Baumgartner said. “It’s becoming a really popular sport and it seems like Fargo is the perfect place for it. We actually heard rumors when we were looking for a location that someone else was looking too. We didn’t want to miss out by waiting.”

So, they acted quick and now; the range is open for business. Triple Ax opened last Friday at 5229 51st Avenue S. in Fargo.

Since Baumgartner and Kalberg have only been working on the range for a short time, there are some pieces left to be put in place. They already have a TouchTunes music system installed, but are waiting on a few other things. They plan to bring in vending machines with snacks and beverages, and leagues will be coming in the fall. Triple Ax plans to join the World Ax Throwing League which will give throwers the opportunity to go on to national competitions.

“We are having a contest for local artists right now called, ‘Meet the Mascot,’” Baumgartner said. “We decided we wanted a mascot instead of just the words Triple Ax everywhere and none of us are artistic. This contest is for $100 and it’s just to make us a mascot.”

Baumgartner said they are not particular about what the mascot is, as long as it ties into the ax theme of the business.

Ax-throwing is kind of like throwing darts and it doesn’t take a lumberjack to participate. Throwers can use either one or two hands. Finesse, rather than power, is the key to a successful throw.

Throwers, competing individually or in teams, aim at a target painted across several 2x10 inch boards. Each thrower gets 10 throws per match.

In the middle is the bullseye which during a game is worth 6 points. Surrounding the bullseye are four rings. Hitting the rings scored the thrower 4, 3, 2, or 1 point with the 4-point ring being the innermost. On the outermost ring are two small dots. On the tenth and final throw, if the thrower hits one of the two blue dots, it is worth 10 points, but only on the tenth throw.

Cost is $20 per person for one hour and $35 per person for two hours. Groups of eight can book a lane – two targets – for $80 per hour. Throwing is open to anyone 10-years-old and up, but those under 10 must be accompanied by a legal guardian.

Baumgartner said getting Triple Ax up and running has gone by fast and taken a lot of work and help, including from their friends, but it has been worth it.