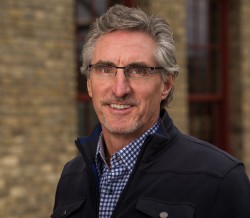 One of Fargo’s most successful business leaders and entrepreneurs is advocating that the North Dakota House of Representatives pass Senate Bill 2279, which would enact discrimination protections based on sexual orientation and gender identity.

Doug Burgum, who has supported many Republican candidates, led Great Plains Software in the early 1980s until the local company was sold to Microsoft in 2001 for $1.1 billion. More recently, Burgum has been committed to downtown Fargo development as founder and chairman of the Kilbourne Group.

One of issues he discussed was eliminating the state’s ban on same sex marriage, which may help attract talented workers to the state. Following up on this, HPR sought his views as a business leader on Senate Bill 2279, which passed the North Dakota Senate and will soon see a vote in the House of Representatives where it faces a tougher battle.

High Plains Reader: How important is it the North Dakota House pass SB2279, which would grant discrimination protection to citizens based on sexual orientation and gender identity?

Doug Burgum: The passing of this bill is an important message to all of our citizens, that we as a state will protect the rights of ALL citizens. And it would bring the laws of the state in line with the best practices of some of our largest employers like Microsoft, which has had internal policies against discrimination for decades.

HPR: What would be the danger if it didn't pass? What effect would it have?

DB: Currently, North Dakota has over 23,000 job openings. From an economic impact, filling these jobs would be like adding another large city to our state. Every policy the legislature is considering should be viewed through a lens of supporting workforce development in the state. After decades of watching the majority of our North Dakota University System graduates leave the state, we are now in new territory. We are not producing enough graduates to fill all the open positions in the state. We need population growth by both retention and net in-migration to fulfill our enviable growth needs. The aged 18-35 year old demographic is particularly attuned to the social climate of our cities and state. Any laws we have that discriminate against or limit the rights of any citizens based on gender orientation create a barrier for recruiting and retaining talent in our state.

HPR: You recently spoke about the state’s need to get rid of regressive social policies in order to lead in business in the future. Do you get any feedback from that, good or bad?

DB: During my keynote last year at the Chamber’s State of Technology Conference, I spoke out mid-speech in support of equal rights for all in North Dakota, and the audience response was to break out into sustained applause. The vast majority of feedback I received afterward was positive.

HPR: Why do you think Republican leaders in the state are so averse to changing these social policies that gay and lesbian advocates say are harmful?

DB: There is an emerging set of courageous voices in the North Dakota Republican leadership, starting with Robert Harms, state chairman of the Republican Party, who has spoken out on the need for equal rights, inclusion and tolerance without diminishing rights of others — a challenge, but one that can be crafted. More leaders in both parties need to hear that policies discriminating against any segment of citizenry are bad for all of us, not just those whose basic rights are being denied.

HPR: What effect does a gay marriage ban or limited discrimination protections for LGBT residents have on doing business in North Dakota?

DB: The No. 1 impact of a gay marriage ban, and not having discrimination protections, is the impact on all North Dakota families whose sons and daughters are denied basic rights afforded to them in many other states.

The second impact is the loss of a much-needed workforce talent pool in North Dakota. That talent pool includes not only those individuals and couples directly affected by these bans and lack of protections, but also those who support these groups, including family members, friends and the majority of young people.

The third issue is that these laws, or lack of laws, are bad for the North Dakota "brand.” Rather than being the welcoming, friendly state we profess to be, the gay marriage ban and lack of discrimination protections are like a billboard saying, "We are intolerant if you don't fit a narrow image of acceptance,” or "Don't stay or move here, you aren't welcome.” And again this legally defined position of non-acceptance and intolerance is an increasingly pivotal issue for a growing portion of the entire population.

HPR: Do you believe public opinion on the matter has changed in the last few years in North Dakota?

DB: If you look at the data nationally, and in North Dakota, support for non-discrimination, this is one issue that is very much defined by generational attitudes and beliefs. Millennials strongly support gay marriage and gay rights, and this support is less prevalent among our oldest living citizens. So over time, the issue of equal rights will make steady progress. Some elected leaders are acknowledging the shift in sentiment and are changing their votes to more accurately represent their constituents. Demographically, North Dakota urban areas have more youth than rural areas, so elected officials from the state’s largest cities will need to especially be in tune to the shifting voter sentiment in their districts.

HPR: Is there any danger for business leaders to speak out on controversial issues? Do more not speak out for fear of offending customers or business partners?

DB: The issue of equal rights has been very politicized, and since nearly every business serves customers across party lines as well as independents, it is the conventional wisdom that speaking out on a controversial issue is bad for business. The flip side of this particular topic is that taking a stand, as we did at Great Plains (now Microsoft) in the 1990s, by providing full spousal benefits for domestic partners, which can be very good for recruiting and retaining talent. Plus, it is the right thing to do in terms of living up to the American ideal of equal human rights for all.