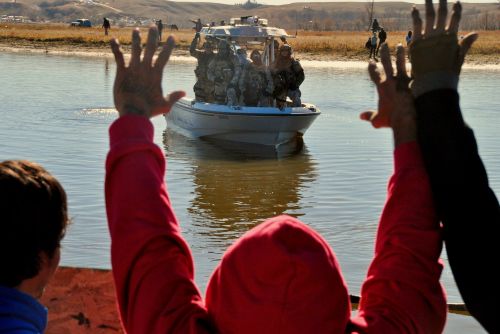 BISMARCK – The civil case against private security firm TigerSwan and owner Jim Reese working illegally in North Dakota during the Dakota Access Pipeline controversy has followed a tedious legal route and came down to one question in the North Dakota Supreme Court Tuesday morning: what remedy does the board have?

Monte Rogneby, attorney for the North Dakota Private Investigative and Security Board, or PISB, said the Board has been hamstrung. Confusion came down to a District Court ruling nearly one year ago that PISB could file for an injunction only if TigerSwan was currently involved in illegal activities.

TigerSwan played a game of cat and mouse by repeatedly using the loophole to back out of the state every time the Board issued warnings, Rogneby said. The private security firm knew about this loophole and argued that because there was no activity when warnings were filed, PISB cannot issue an injunction.

One Supreme Court Justice said such tactics were similar to a husband who beat his wife and after being issued a restraining order then saying the restraining order had no merit because he was no longer beating his spouse.

“When the Board filed a complaint, TigerSwan pulled their people,” Rogneby said.

“Now the Board was supposed to dismiss its action. Then we find out three months later that they’re back in North Dakota, and we issue another complaint and they pull their people again. If the violator changes their behavior, we have to prove some future intent, and I don’t know how I can prove future intent in a future case.

“This court has to assume that the allegations in the complaint are true and the defendants violated North Dakota law.”

“As long as you leave fast,” McEvers said.

A year after a North Dakota district court judge dismissed a civil case against TigerSwan, Rogneby is still attempting to define what legal routes the Board had in 2016 and still has today when well-financed security enterprises break laws in North Dakota.

In addition to the cat and mouse game, TigerSwan also refused to comply with court-ordered discovery for information, Rogneby said.

“TigerSwan understands that the Board has limited resources and I think they are trying to chew up the resources of the Board as they believe it will provide them some advantage,” Rogneby said.

“Our client didn’t do that at all,” TigerSwan’s attorney Lynn M. Boughey said. “They were only doing consulting, they were saying ‘This is what you ought to do.’ First thing they said was ‘Get rid of those dogs.’ The reason we were brought in is because it was a mess and they [Energy Transfer Partners] needed advice on things like you don’t have dogs. This entity is a veteran owned, most employees are disabled veterans.”

Another example Boughey gave of TigerSwan’s work in the state was that they advised to hand out cards saying they believed in the First Amendment, but to practice that right off of private lands. He also acknowledged that TigerSwan issued daily reports, coordinated security teams, and he had a list of sheriffs and deputies that could back up TigerSwan’s account.

“It’s clear that they acted as enterprise security,” Rogneby said. “They were basically the proprietary function for Energy Transfer Partners, because Energy Transfer Partners didn’t have a security staff here. TigerSwan comes to all these hearings and keeps repeating something that is not accurate. Other people gathered information and we just processed it, but the Attorney General said you have to have a license to gather information.

“Legally, based on what they have admitted doing they violated North Dakota law,” Rogneby said.

“I think the court understood the issues we were presenting, and that’s really all that I can ask for,” Rogneby said.

Follow this link for more information pertaining to TigerSwan’s actions while in North Dakota during the Dakota Access Pipeline controversy of 2016 – 2017.