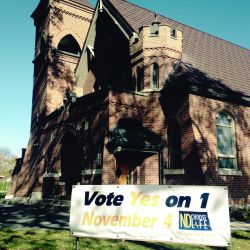 All the campaigning and political activity surrounding Measure 1 in North Dakota has led some to wonder how churches are able to actively and politically advocate on how to vote on the measure. Anyone driving by churches in downtown Fargo has seen various signs on church property asking people to vote Yes on Measure 1; and you may have heard about priests asking parishioners to vote yes or even see marches and rallies on church lawns. The measure, upon voter approval, would amend the state constitution to provide for the “inalienable right to life” at every stage of human development.

So how is it that churches with nonprofit status are able to be politically active on a measure like this? The answer is an IRS rule that says as long as it’s not for a specific candidate or political party and as long as it doesn’t amount to a significant number of overall church activities. That number hasn’t been defined, however, lawyers have said some IRS opinions show to represent more than 15% of overall church activities. Christopher Dodson is executive director and general counsel of the North Dakota Catholic Conference, which is the public policy arm of North Dakota Catholic Dioceses in Fargo and Bismarck. They have been been involved in the pro-Measure 1 campaign from the beginning and are one of its sponsors.

”You have to think of it as -- a church is just like any organization or individual,” Dodson told HPR. “They have free speech rights and free exercise rights. But you can give up some of those rights in exchange for something from the government; in this case the government says we will give you tax exempt status for federal income tax, in exchange we are going to put some limits on what you can do. Those limits are you can’t endorse a candidate or party and you can’t do more than a substantial amount of your total activities engaged in what they call lobbying activities.”

Dodson said the church is no different than any other nonprofit organization that lobbies on measures and frequently advocates for bills at the North Dakota Legislature. With Measure 1 dealing with abortion and life issues, he sees it as an important issue for the church to speak out on.

“It’s very much a part of the ministry of the church to affirm the dignity of human life,” he said. “It’s really no different than if they took a position at the Legislature. We had churches opposed and supporting those various gun laws last time. A ballot measure is no different than a bill.”The group organizing political opposition to the measure, North Dakotans Against Measure 1, said it has been getting support from faith leaders advocating a no vote as well. The group feels it’s important to change the perception that all religious leaders support a yes vote on Measure 1.

“There are definitely faith leaders who are concerned about Measure 1 and who have taken it upon themselves to organize into grassroots groups to put forward their concerns about the impact Measure 1 could have,” said Karla Jo Hanson of North Dakotans Against Measure 1. “And I could give you some examples. There was a group of clergy and lay leaders from the Grand Forks area that wrote a joint letter to the editor to the Grand Forks Herald. It was a few weeks ago, and they also organized two public forums to highlight their concerns. They were the hosts of these public forums.

“And then more recently, a group of clergy and lay leaders from the Fargo area also wrote a letter to the editor to the Fargo paper to share their concerns and one of the points that they made was you can be a person of faith and be against this measure and that faith leader are not all of one mind, that there are different opinions on this matter within the faith-based community.”

There are also other nonprofit organizations expressing opposition or concern about Measure 1. AARP, while not advocating a no or yes vote on the matter, did mention in its voter guide that it shared concerns about the measure in 2013 during the ND Legislative session.

“There are a variety of organizations that pay attention to health care issues that have expressed concern about Measure 1,” Hanson told HPR. “For example, at the national level, Resolve. Resolve is the national infertility organization and they oppose Measure 1 because of the impact it would have on in vitro fertilization services.”

She also said a variety of professionals, not just from the religious field, have been speaking out on the matter as well.

While there have been some evangelical churches who feel that churches should have the right to advocate for individual candidates and political parties and considered legal challenges to do so, so far the Catholic church has been content to use its current legal abilities under IRS rulings to stump for issues it feels passionate about.

“The main thing is to educate people,” Dodson said. “What any church would do is connect the churches teaching with the issue so that voters are educated and can make a decision accordingly. You can’t determine how someone is going to vote, you can’t tell them how to vote or I suppose a pastor could but you can’t guarantee it obviously. In the Catholic context, speaking on public issues, engaging the laity to shake what we call the temporal order, the things in this world in business, politics, economics, it’s a part of what being Catholic is about. So it’s just part of who we are and our faith tradition.”