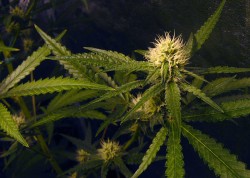 Fargo man chair of effort to ease pain through legalization

A Fargo man has formed a committee made up of North Dakotans who will seek to acquire signatures to get the legalization of medical marijuana on the statewide ballot in November of 2016. Financial planner Ray Morgan spearheaded the effort because he hopes to be able to use medical marijuana to ease pain for neuropathy after a back surgery that went south.

He also hopes it will help MS patients, cancer patients, those suffering from seizures and others. He first thought about it after a bill to legal medical marijuana, sponsored by Rep. Pamela Anderson, failed in the last Legislative session. A previous effort to get medical marijuana on the ballot in 2012 failed when NDSU college students were found guilty of forging petition signatures.

Morgan’s committee has to be verified to all be legal North Dakota voters by the Secretary of State as well as the language approved in the initiated measure. It also needs to be double checked by the Attorney General. Once that happens, the committee is free to acquire the 13,500 signatures to get the issue on the ballot. Those signatures also must be verified. Morgan is hoping to have the committee names and ballot measure language before the Secretary of State in a couple of weeks and to be out gathering signatures by mid to late September. He believes it will be very easy to get them.

“Getting 13,500 signatures, you could darn near get that at a Bison Football game for crying out loud so I don’t think we are going to have much of an issue there,” Morgan told HPR.

Morgan thinks medical marijuana is necessary for North Dakotans who are suffering from pain and not getting the relief they need from modern over-the-counter medicine.

“Not that this is going to be a cure all or anything like that but if you look at what we’re currently faced with in pain medication -- in a lot of cases you are looking at a lot of opiates which obviously aren’t the healthiest things to put in our system,” Morgan said. “And this gives the doctor and patient another avenue to at least explore some other options.”

Minnesota’s medical marijuana bill passed successfully due to its strict limitations. This happened partly because law enforcement said they saw legal marijuana, grown by states such as California, being sold on their streets.

“I can certainly tell you that if most anybody in North Dakota wants to get marijuana, that’s not going to be a problem for them whether you are a college student, professional business person, you can get it if you want it. There’s no question about that,” Morgan told HPR. “This is not going to increase the amount of marijuana that’s on the street for sale, this is going to really regulate it in a way which you can’t go out and wholesale buy pounds and pounds and pounds of medical marijuana or edibles or anything like that and go sell them on the streets.”

The ballot measure Morgan is proposing will feature similar language to the bill proposed in the last legislative session by Rep. Anderson. Morgan said the political makeup of the North Dakota Legislature is the reason medical marijuana hasn’t been legalized in the state. He is seeking to bypass republicans and have the issue directly decided by North Dakota voters.

“You have an absolute ultra conservative Legislature that just doesn’t see the light,” Morgan said. “We just want to get this going because I think that it’s important for a lot of us that are living with chronic pain.”

NOTE: John Strand of the High Plains Reader is on the Committee seeking to get the issue of legalizing medical marijuana on the ballot.