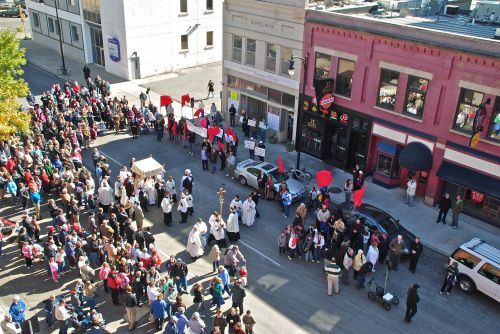 By Sabrina Hornung and Thomas Bixby

Last week a photo surfaced on social media of a Fargo man standing among protesters in front of the Red River Women’s Clinic (RRWC) smiling and holding a cardboard sign that read, “JESUS LOVES SLUTS” and wearing a matching shirt. This is neither the first nor the last instance of counterprotestors joining the protestors outside of the clinic. We couldn’t help but wonder, do they help or do they hurt their cause?

We had a chance to chat with Tammi Kromenaker, director of the Red River Women’s clinic and Lead Escort Caitlin Annick Ross on what you can do to effectively help support the RRWC.

HPR: What do you think about this guy? What can people do to effectively help the clinic?

TK: I know that my lead escort Caitlin reached out to him and apparently met him for coffee, but I haven’t gotten a report back from her.You know, kinda like “Dude, you’re doing it wrong.” Being an escort is a way to support the clinic. Reaching out to us, people can email us through the website and ask for information. We’ve seen a real uptick in folks reaching out to us and asking how they can get involved. The weather has something to do with it (laughter). And we’ve had more protester activity. You can be an escort or provide escorts with snacks or lemonade, coffee if it gets colder, although that’s more in the winter. If you can’t escort yourself, walking by give them a high five, driving by say thank you instead of fuck you, just hey, thanks, escort! Those are great ways to support our patients, our staff, and our escorts.

Thomas Bixby, HPR: Hi, Caitlin! You, RRWC lead escort, were to meet the aforementioned counterprotester for coffee, reason with him. Could you tell me how that turned out?

Caitlin Annick Ross: I haven’t yet had the chance to meet with him as he was out of town last weekend. I will keep you posted if I get to meet him this week.

HPR: Any comments on his behavior / appearance? I suppose he isn’t aggressive or you wouldn’t be meeting him.

CAR: He didn’t seem aggressive or threatening. I didn’t even notice his sign because by the time he showed up all of our patients for the day had arrived, so when he held out his sign, I only saw his back and assumed it was the same old protester shtick. I am hoping to discuss with him why counterprotesters are not helpful and how damaging his “slut” language is.

Sabrina Hornung, HPR: How do you guys feel about counter protesters?

TK: We do not welcome counterprotesters when our patients are coming, on Wednesdays, because all patients see are people with signs. Put yourself in that patient’s place. She’s not from Fargo, she’s driving by, she doesn’t know what’s going on. As well as you think you make your counterprotest sign, she doesn’t actually read the signs. What we tell patients is that the people in the blue vests are there to support them. So you’re adding stress to the patients and amping up the protesters. They, the protesters, think they’re getting a reaction. I just posted an article on the clinic’s Facebook about counterprotests, because it has been coming up a little bit around the country...kind of in response to a state legislator in Pennsylvania, who went out and filmed himself confronting a protester, and what it did is it turned into even more protests. If people what to do something on a non-Wednesday, we welcome that, that’s everybody’s free speech right, we solemnly believe in free speech. But when you are adding to the chaos out in front of the clinic, all you’re doing is adding to the patients’ stress level. 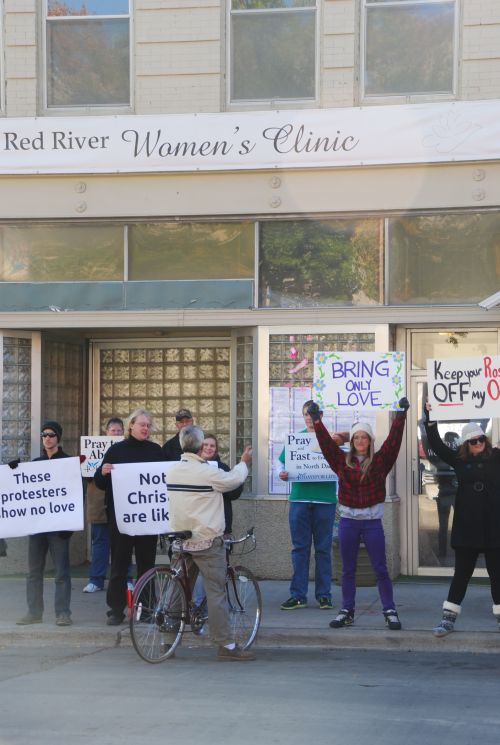 HPR: I saw that sign. It really got me going.

TK: It started with that judo Jesus thing a couple of years ago. That was a nightmare. And thankfully, we were able to prevent him from getting into a physical altercation. And that’s what happens. People respond to that. I was able to speak to that young man and he was a reasonable person who understood that his presence on the sidewalk, on a Wednesday, when we’re seeing our abortion patients, only adds to their fear and stress. I mean, people call us and say, “Is somebody going to hurt me when I’m out there? Do they have guns? Do they have knives? Are they going to throw tomatoes at me? Are they going to throw water balloons at me?” People coming here are already fearful. We just don’t need to add to the circus atmosphere, and that’s what counterprotesters do.

It is for their benefit. He’s not helping our patients. He’s not adding to our dialogue. And the folks who come out and protest each week? They’re true believers. They’re not going to be swayed by one person showing up and doing some snarky sign. He did respond to one of the comments. I read most of them. I think it was Warren Christensen who said something like hey guy, this is not the way to do it. And [the counterprotester] said, I work eight to five so I can’t escort. I think he was on his lunch break and he just decided to show up. So why don’t you come and escort on your lunch break instead of doing something that only serves you? It does not serve our patients.

HPR: What do you think about the terminology on the sign?

TK: I know he was trying to be snarky; I don’t get it. But what do the patients see? Using the word slut is more shaming and stigmatizing for our patients. Our patients are coming to our clinic seeking medical care, not to be shamed, bullied, further added to the already rampant stigma that exists in abortion care, and honestly, counterprotesters don’t help anybody. I just want to keep the focus on the women. You are not helping our patients or their families when you are out there counterprotesting. So Red River Women’s Clinic does not welcome counterprotesters.