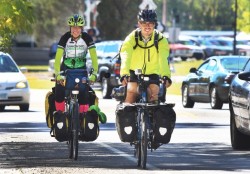 As climate change becomes a more and more pressing issue, it’s become essential that the public be made aware of the danger and what they can do to help. Climate change is a multi-pronged issue with aspects that people sometimes don’t consider. To gain a full perspective, one has to get up close and personal to the people being affected by it.

Mindy Ahler and Ryan Hall are doing just that. Their cycling tour, LowCarbon Crossings, will take them 4,000 miles across 14 states to Washington DC, gathering insight regarding climate change from the people they meet along the way.

Ahler is a co-director of Cool Planet, an organization dedicated to finding homegrown solutions to climate change, while Hall recently completed his third year at AmeriCorps, a program focused on engaging adults in public service works.

Biking across the country grants the opportunity to form more personal connections than traveling by bus or plane. Ahler and Hall’s tour is meant to emphasize climate change’s impact on a more individual basis as they gather stories from the people they meet along the way.

“You experience the country in a totally different capacity when you’re riding a bicycle, you know?” said Hall. “You get to take more time and travel through more places and meet more people, which has been great. We’ve met incredible people all along the way.”

Another goal of the bike ride is to build bridges between people on either side of the climate change conflict.

“The conversation on climate should also be that of job security, of creating livelihoods for all people and trying not to be polarizing in the way we have these conversations. It’s important to be careful of what we say and how we approach the topic, and to be more inclusive, even with the folks that don’t believe humans cause climate change. There’s still common ground to be had.”

Careful preparation and training went into the trip, but even with that in mind, the journey hasn’t always been easy. The crossing through Rogers Pass in Montana was particularly taxing, thanks to the weather.

“There was rain,” said Hall, “there was sleet, and as we got higher up in elevation there was snow. Our gear was soaked, our hands and feet were miserably cold and going numb.”

Luckily, there have been people along the cyclists’ journey ready and willing to lend a helping hand.

“If we’re travelling through a town and we’re cold and wet,” said Ahler, “suddenly we’re introduced to someone who takes us into their house for the night, where we can dry off and be warm instead of finding someplace to camp.”

On October 1, Ahler and Hall arrived in Bismarck to speak to the community on climate change. On October 2, residents then joined them on the 42 mile bike ride to Standing Rock to speak with Native American water protectors and their allies in opposition to the construction of the Dakota Access Pipeline.

“We’ve found people putting their bodies physically on the line,” said Ahler, “raising attention for issues like the Dakota Access Pipeline. The public often isn’t aware of them, so my first thought is how grateful I am that there are people that are willing to put themselves out there and raise the issue. It becomes a part of our conversation throughout the country, and throughout the world.”

One thing that has become even clearer thanks to the tour is the need for a change in where our focus lies.

“I stress that we can’t build any more fossil fuel infrastructure,” said Hall. “There are many more jobs to be had by investing in clean, responsible infrastructure in a cleaner energy economy that doesn’t jeopardize the health of soil and water, or trample upon the right of the people who have lived on this land for thousands of years. We need to sustain solidarity with any community that has been negatively affected. Whether it’s the pipeline construction or job loss from a coal business going bankrupt, we need to bring in all people.”

Even with the threat that the Dakota Access Pipeline poses, there is still some good that has come from it. Rallying to the cause in opposition of the pipeline has brought people together in a positive way.

“We do have a great challenge ahead of us,” said Hall, “and what we’re learning from the Dakota Access Pipeline is that we tend to come together as a people to find solutions and really bring in that brighter, better future for all people.”

Ahler and Hall expect to complete their journey on November 13 in Washington DC. By that time they are sure to have gathered many insights into the impacts of climate change.