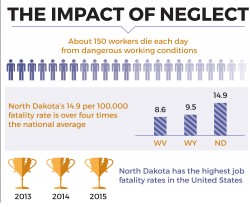 A new report from the AFL-CIO shows North Dakota had the highest job fatality rate in the nation for three years in a row. The report “Death on the Job: The Toll of Neglect” compiles results from 2013 and shows that the state’s job fatality rate of 14.9 per 100,000 was more than four times the national average. The fatality rate and number of deaths per year have more than doubled since 2007.

The next closest state to North Dakota in the report is Wyoming, which had 9.5 deaths for every 100,000 workers, followed by West Virginia with 8.6 deaths and Alaska with 7.9 deaths. The state with the lowest job fatality rate in the nation is Hawaii with 1.6 deaths per 100,000 workers.

One positive statistic from the report is worker fatalities went down from 64 in 2012 to 56 in 2013. However, even with that number decreasing, when averaged per 100,000 workers, North Dakota still has some work to do to catch up to other states.

Tom Ricker, president of ND AFL-CIO, said the report shows how the state lacks oversight and protections for its workers. He thinks employers need to be punished when they allow safety lapses, rather than just get slaps on the wrist.

“I think employers need to be held more accountable for their employees. Quite often, if someone has an OSHA complaint, (the companies) evade it and the end up paying very little,” Ricker said.

“Particularly in the oil and gas industry, we’ve seen employers that have been caught doing things like dumping illegal waste and things like that and they get $800,000 fines, and by the time they are done, fines get (down to) $10,000 or $20,000. Same thing with OSHA -- they go out and find violations, they evade them and they cut them down to where the fine is just miniscule. That doesn’t incentivize them to cut down the risks either.”

Ricker believes more OSHA inspectors are needed in North Dakota, especially considering the explosion of activity in the oil and gas sector in recent years.

“I think we need better OSHA enforcement between North Dakota and South Dakota. (Between) the two states we share eight OSHA inspectors. At that rate, I think the last number I heard is it would take them 126 years to inspect each worksite in North Dakota,” Ricker said.

The North Dakota Petroleum Council represents the oil and gas industry in the state. Tessa Sandstrom from NDPC said the death-rate report calls for a need to improve infrastructure in the state to keep up with the booming industry. She pointed out almost 60 percent of the fatalities were attributed to transportation.

“It points back to the need to build up our infrastructure, get more pipelines in so we can get more trucks off the road. That remains the highest cause from what I’ve been looking at of those fatalities,” Sandstrom said.

North Dakota’s oil boom has been going on for a number of years and it’s not the only state in the nation producing large amounts of oil and gas. Sandstrom has an explanation for why the state hasn’t caught up to others yet in infrastructure to deal with the boom.

“The difference is (other states) have year-round weather where they can build those pipelines whereas we have five to nine months, if we’re lucky, to build that kind of infrastructure,” she said.

She also said the size of North Dakota is a factor. “We are building basically from scratch across a very large area the size of West Virginia. So that’s another area that we’ve seen in terms of infrastructure.”

Troy Loberg, of Chaffee, N.D., worked for a company that did subcontracting work for the railroad industry in Bismarck and Mandan. In January of 2010, he got into an accident while restacking oilfield pipeline. He said he and his co-workers warned his supervisor the job was unsafe but were told they would be fired if they didn’t finish it. He hasn’t worked since.

The accident caused him to suffer broken ribs, ripped shoulder muscles, a herniated neck also with torn muscles and nerves. He said he was taken via a pickup truck and dropped off at a hospital to avoid an OSHA investigation that would have shut down work that day. He has ended up with workman’s comp, which pays him $140 a week and is about to run out. He still is unable to work and takes pain medication every day.

North Dakota Workforce Safety and Insurance put him in a retraining program. Upon completion, he was then told he was medically unable to work. He has many issues with how the state treats its workers.

“They say they are for the worker. They say they are for the working class, but all they do is collect their premiums and give money back if they’ve over-collected from employers, and they treat you like a criminal,” Loberg said.“There’s laws on the books that say you can’t go after your employer for any negligence or anything. So if you get hurt in North Dakota, WSI has the right to let you go like they did me if you cannot perform the work you did like you used to do. The company can get rid of you, wipe their hands clean of you and drop you on workman’s comp. And then they decide what you should be retrained at and what you should be at retained earnings and then when you are at the end.”

Loberg said if employees in the state really want to protect themselves, they need to get disability insurance.

“It needs to be out there that these workers think they’re covered, that their legislators have done what they could to make it safe for the workers when all they’ve done is make it worse by putting all these laws on the books and tying their hands,” he said. “And even when you do get a hearing, you don’t get a reply. “

“People need to know, in North Dakota, you’re on your own if you get injured, completely on your own,” Loberg said.

Sandstrom, speaking for the oil and gas industry, said it’s very committed to improving safety. She dismissed any notion it’s cutting corners to save dollars.

“Safety is a huge priority. I can’t speak for every single company out there, but I just can’t emphasize enough how much emphasis is put on safety. For many of us, these workers are friends, neighbors, family members, and we all want them to get home safe. Accidents do happen but we continue to strive for zero incidences. We have seen the rate come down since last year despite continued heavy activity in 2013. Those are still too many, but we’re glad to see an improvement in that.”

Ricker, of the ND AFL-CIO, also has problems with WSI and how they treat workers in the state. He said they are not giving the money they collect back to the injured workers despite increases in the number of them in recent years.

“The unfortunate thing I see is WSI is giving rebates back to employers. They basically claim that they’ve got more premiums coming in than what they are covering for claims. So that’s an alarming thing too,” Ricker said. “WSI, I think, gave back nearly $3 million in rebates. Why aren’t they doing more with safety incentive programs or just programs in general to educate workers about the risks and dangers?”

Ricker has some ideas about what the state can do to improve safety in the future, starting with getting the employees involved in producing the safety programs.

“Give employees ownership in safety,” he said. “(Companies) also need to do more safety programs, more training, more on the job type training for safety, more training period, more awareness of the dangers and the risks involved for any particular job that you may be doing.”