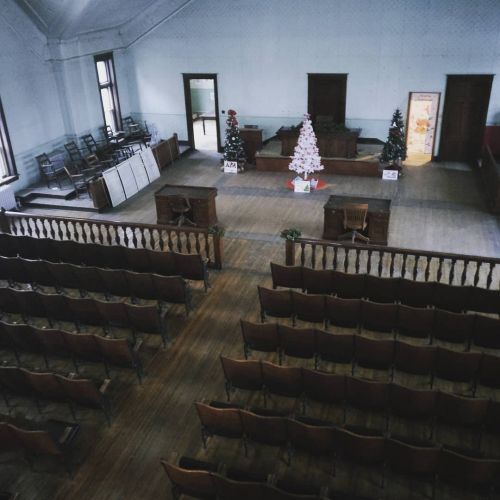 As I write this, the beautiful Stutsman County Courthouse State Historic Site in Jamestown is only partially furnished. But this photo, taken by my one-time colleague Guinn Hinman, caused me to see the place in a whole new light. She concentrated some of the historic paperwork, office equipment, and books in one room to stage this historic vignette. Don’t you want to step into that room? You just know you’d be immersed in another time. It makes you want to walk from room to room and see the different tools of an auditor, recorder, treasurer, sheriff, clerk of court. There would be typewriters, ballot boxes, mechanical calculators, seal presses, globes, fountain pens, prison keys and handcuffs, gavels, and robes.

Then I reflected on how badly voters, myself included, need to better understand these jobs. Several of them are elected positions. Do most of us know enough about the work of a county auditor or treasurer to make an informed vote? 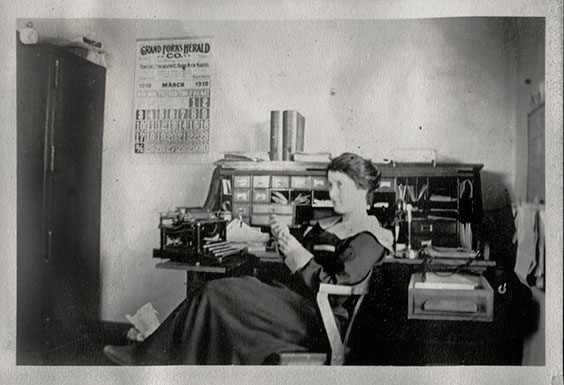 Marion Bond, acting superintendent of schools in Slope County Courthouse, 1918. Historic photos prove that North Dakota courthouses were not just workplaces for men. Even before passage of the 19th Amendment, women could vote in school elections in North Dakota, and many women were elected as superintendents of public instruction. SHSND SA 00392-000176

Thinking along these lines, what if the Courthouse could become a beautiful, immersive exhibit, where every room illustrates different aspects of local government and citizenship? The rooms and everyday objects of a historic courthouse would illustrate the Bill of Rights (jury room, warrants, newspapers), the expansion of civil rights over time (ballot boxes, secret ballots), government accountability (auditor’s office, treasurer’s office), the protection of private property (deeds and wills), law enforcement (sheriff’s office, jail), the role of public education in a democracy (superintendent of schools), and on and on. Indeed, if you had set out to make the most engaging museum about citizenship imaginable, could you possibly do better than this?

Naturally, this made me wonder what other museums, historic sites, or interpretive centers focused on citizenship are out there. I found some that address becoming a citizen, like Ellis Island. I found several that focus on aspects of citizenship like civil rights or military service. But much to my surprise, I couldn’t find one about being a citizen writ large. What rights do citizens in America have? What responsibilities? I found websites and even one or two exhibits, but not a single complete interpretive facility about being a citizen. If I’ve missed something, please let me know! But even if these sites exist, clearly there’s a need out there for more.

So when I learned that a grant was available through Jamestown Tourism to create unique local experiences that would draw people to the city, I knew we had to apply! The 1883 Courthouse Committee, who played a key role in saving the Courthouse and continue raising money for its ongoing restoration, were excited about this, too. As a group that cares deeply about both the Courthouse and community involvement, it was a natural fit. We were delighted when we heard that we got the grant. 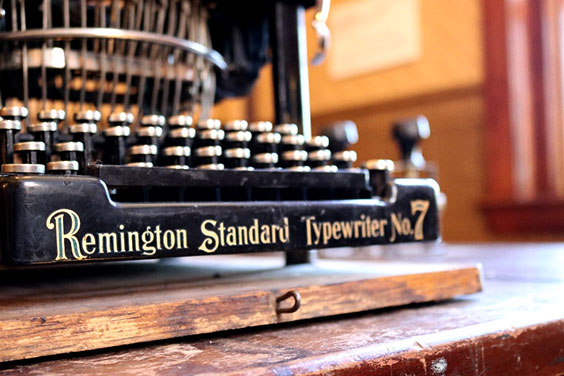 A vintage Remington typewriter. Early technology like this is cool again. Why not use it to create memorable exhibit experiences?

Visitors to historic sites tend to come as groups — couples, families with children, school groups, friends. We want this exhibit to support fun, meaningful interactions among them. There will be functional devices like candlestick telephones, typewriters, mechanical calculators, and surveyors’ equipment. Visitors can cast votes on issues from early North Dakota history. They can type their answer to a thought-provoking question on a Remington typewriter, then post it to the wall for other visitors to consider and add to the conversation. There will be games for small children and a research library for the curious. You can see what we’ve done when we reopen for the season next Memorial Day weekend! 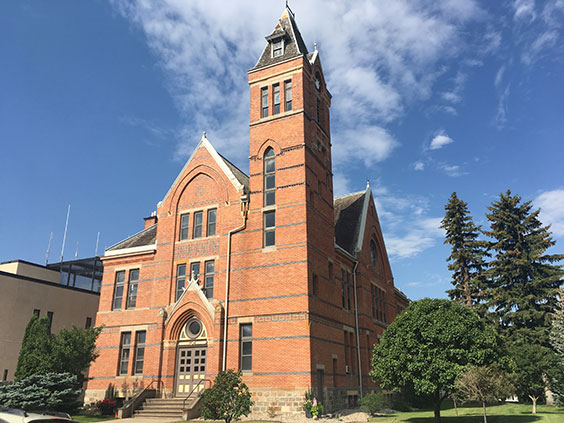 “Jamestown may well be proud of her court house for no better or more beautiful one was ever erected in all the land,” wrote the Jamestown Weekly Alert on July 6, 1883. More than an office building, the Courthouse reflected the pride Stutsman County citizens felt in the government they helped establish.

The Courthouse is a beautiful place and a powerful one. You can feel it when you’re in the building. This is the monument that a founding generation built to democracy. This was 1883, after all, when many residents of Jamestown had been born in other countries as the subjects of hereditary monarchs. Many could remember having no say in taxation, war, or education. Where they came from, the highest hill around was frequently crested with a castle or palace for the ruler. But in Jamestown, they covered the highest hill with a palace for the citizens, the true rulers in America. This Courthouse was a celebration of American citizenship. I hope this exhibit is a fitting tribute to their legacy.

[Editor’s note: Rob Hanna is a Historic Sites Manager at the State Historical Society of North Dakota. He’s passionate about using evidence-based decision making to delight visitors and build audiences for historic museums. This article was originally published 11/22/19 at http://blog.statemuseum.nd.gov/]