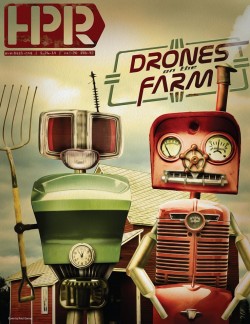 North Dakota is at the forefront of a movement to use drones or unmanned aircraft for agricultural purposes.

It’s natural that the state and this industry would combine forces early on. Agriculture is the largest industry in North Dakota and the state is positioning itself with changed missions at the Grand Forks Air Force Base and North Dakota Air National Guard to capitalize on the burgeoning unmanned aircraft industry.

The Association for Unmanned Vehicle Systems International (AUVSI) released a study last year revealing that unmanned aircraft will have $82 billion worth of economic impact in the United States in the next 10 years, and roughly 80 percent of that will come from use by the agricultural industry.

While drone usage for farmers and ranchers is still being studied, one major benefit would be the use of precise imagery, which can provide real-time information on, for example, which plants are or aren’t working. Producers can then adjust planting management and fertilizer plans for hundred of acres, saving valuable time and money. For livestock, thermal imaging can be used to see if animals are sick and need to be removed from the herd.

For now, the Federal Aviation Administration doesn’t allow the commercial use of drones or unmanned aircraft. However, North Dakota applied for and was recently granted the ability to be a test site for drone use for agricultural purposes. The state’s research will be used by the FAA to safely integrate and regulate drones into US airspace, something Congress mandated the FAA do by 2015.

Bob Becklund, former commander of the Happy Hooligans 119th Fighter Wing of the North Dakota National Guard, is now executive director of the Northern Plains Unmanned Aircraft Systems Test Site, one of six facilities around the country selected by the FAA to test commercial uses of unmanned aircraft.

Becklund said a number of industries, such as gas, film, energy, insurance and real estate, all have an incredible need to use drones to improve safety and efficiency in the workplace.

“The problem is that the industry is outpacing the ability of the FAA to keep up,” Becklund said. “The FAA is a big institution; it’s a bureaucracy, it’s a government agency and nothing moves very fast really for any branch of the government. But in this case here they have got to. And their emphasis is on it but it just isn’t moving fast as industry the is.”

Websites like Amazon or eBay currently offer affordable drones that come out of a box and, with a little research, can soon be up and running. Some farmers claim these Web-bought drones can be used under a provision allowing model aircraft to be used for hobby or recreational purposes. However, the FAA disagrees with anyone using that provision in applications where profit is involved. Some are also concerned about the safety implications of farmers flying drones without the FAA’s approval and oversight and the impact on airspace.

“Maybe you got a person out there imaging their crops themselves and watching the airplane and maybe not looking for other traffic, that type of thing,” Becklund said. “Or maybe they have no knowledge whatsoever of right-of-way rules or any kind of rules that might be out there in the national airspace system and then along comes a spray pilot, you know, going from point A to point B just doing his job and ends up getting hit by one of these because they are so small, the ag sprayer pilot. Really, it’s physically impossible to see them.”

Becklund feels safety concerns are muted on the test sites because drones are only flown by commercially trained pilots who also have someone with them to watch the airspace. In addition, drones are flown at low altitudes in mainly rural areas. He feels North Dakota is an ideal testing spot for drones under the standards given by the FAA.

John Nowatzki is an agricultural machine systems specialist at North Dakota State University’s Extension Service, which has sought grants based on request from companies to get involved in testing ag applications of drone use. It’s also a part of the test site approved by the FAA for using drones for ag purposes. It’s already conducted several test flights that have already turned up quality ag-related imagery.

“From a point of view of monitoring crops or monitoring livestock, the advantage to unmanned aircraft is that it’s real time; you have that information, you fly today and you have it today. It’s high-resolution and the operator gets to control in one way or another where you are going to get that imagery and where you need it most,” Nowatzki said.

Currently, farmers rely on information from satellites from NASA or other sources, which is not that high-quality and can get expensive without providing timely information.

One concern many have about more commercial use of drones is the potential for invasion of privacy. Recently a drone was reportedly used to spy through a woman’s window in Seattle.

Nowatzki realizes the need for regulations to respect people’s privacy.

“I think that in the future there will be regulations that will govern that, maybe by the state, maybe by the federal level,” he said. “But in the meantime we certainly would get approval if we were even turning at the end of a field over somebody else’s property. We would get approval before we would do that, and I think that’s true in the future too.”

“The exact same cameras and sensors and all that kind of stuff that is on these unmanned aircraft is also on manned aircraft or on your cellphone or on light poles or whatever they happen to be — security cameras, that kind of stuff,” Becklund said. “So the privacy issues that get mentioned are not applicable just to unmanned aircraft or drones. It just so happens they get a lot of attention these days because they are fairly mobile and can be flown by individuals. So I think these privacy issues over time will get worked out in the courts. “

UND set up an advisory committee of government officials and community leaders to deal with drone privacy issues, Becklund said. That committee has the ability to deny flights, and Becklund feels it could be a model for the rest of the nation once drone use becomes more common.

The Red River Valley Research Corridor, comprised of research components at UND and NDSU, recently held its 8th Annual UAS Action Summit, which saw companies from around the U.S. and world seek the latest answers on how drones can best be used for ag purposes.

In addition, NDSU is hosting an open-to-the-public Field Day at the Carrington Research Extension Center on July 15, beginning at 9 a.m. with several morning tours. Drone aircraft will be demonstrated and imagery produced by drones will be shown.

Becklund says it’s a great time for North Dakota to be a leader in the drone movement.

“The analogy I like to say is when the Wright Brothers were starting to fly, they had no idea how they were going to be used in the future, they just knew it needed to be done and it was going to be good for mankind,” Becklund said. “The exact same thing is true with unmanned aircraft. Our job is going to be able to know how to safely get them into the airspace so they can be used commercially, and then you let the industry and the smart people out there figure out how they are going to use them to increase our quality of life and save money and save lives.”

Free and open to the public.