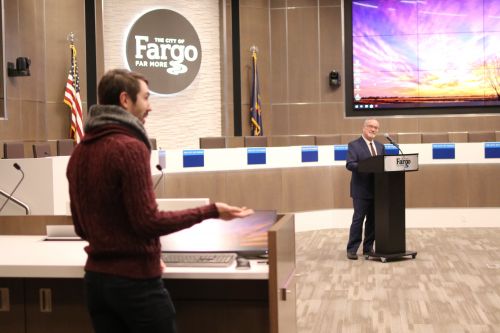 FARGO — Climate change has been known and ignored for half a century, but Fargo residents made their voices known Wednesday during a city organized Town Hall event, demanding an end to fossil fuels and for the city to declare a climate change emergency.

More than one hundred people showed up to the event organized by Fargo City Commissioner John Strand. He emphasized the importance that all opinions on the issue were important, but only one person stood up to deny climate change was real. Dozens lined up to take the podium for three-minute speeches.

“There are folks who are concerned about what is going on in the environment and there are those who don't believe anything is going on,” Strand said. “But today, the voice of the people will be heard. This is your chance to stand up to show and speak up.”

“This is a learning session for all of us,” Fargo Mayor Tim Mahoney said.

From elementary and high school students to the city’s elderly, nearly everyone in attendance voiced their concerns that Fargo — once a city with a top rating for environmentally friendly policies — is not doing enough.

“The fossil fuel industry runs a lot of our state, telling us what to do, I believe,” Faro resident Gerri Fairfield said. “We need to elect people who will do the right thing. We need to get rid of all these old people in North Dakota.”

When asked to clarify, Fairfield, an elderly person, said she meant the “old people” who represent the state in Congress.

“In the 1980s we had global warming, but now we’ve changed it to climate change,” West Fargo resident Mike Moberg said. “What else is changing? We’re not having more tornadoes or hurricanes since the 1970s, since we’ve had satellites. Hurricanes have trended downward since then.

“I don’t want to see us implementing policies for a problem that doesn’t exist.” 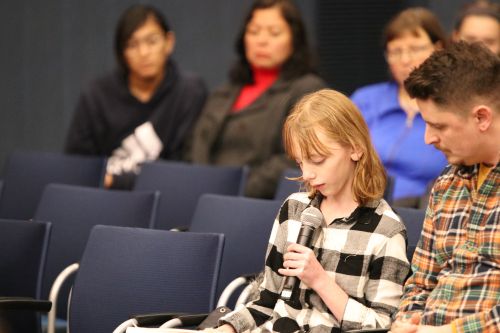 Many speakers asked the city to consider its energy tax — approximately $3 million a year — to be invested into creating incentives or finding ways to reduce the city’s carbon footprint, whether that meant providing assistance for individual house owners to convert to solar and wind energy or to reduce car traffic.

Before issuing a soon-to-be-announced proposal to challenge the city to create robust change, John Rodenbiker, Fargo School Board vice president, said zero emissions goals must first be set, then reached by 2030.

“We are in a climate crisis and it is an emergency,” Rodenbiker said.

“Our city leaders need to recognize this is a climate crisis and work with us to fix it,” Penelope Echola, 10, said.

Other speakers condemned the state’s dependency on the oil industry, saying there is lasting money to be made in renewable energy.

“There are big and powerful businesses at play, namely oil, which is probably one of the biggest issues that needs to be addressed,” Fargo resident Ed Melrose said. “Clearly there is something going on with climate, what is it, nobody really knows, but it is a large political issue on the business end.”

“North Dakota is relatively well insulated from drastic climate change, but if you talk to farmers they’ll say their crops are much more wet now,” Jensen said. “We are actually working against it on the state level and sit on our hands. The rest of the world is screaming for solutions. We have excellent solar and wind resources here, I would like to appeal to the city and say we need to go faster.”

Potatoes are rotting in the ground. Beets can’t be harvested. As the prairie winter months hit, many farmers are still struggling to harvest hay, soybeans, canola, and more.

“The clock is ticking, and the clock has been ticking for 150 years since the beginning of the Industrial Revolution,” Stepan said. “Let the revolution begin.”

She added demands saying Fargo must declare a climate emergency, the city must immediately begin to reduce its carbon footprint and focus on green energy, and that the city needs to create a Citizen Climate Environmental Task Force.

“We have all the tools that we need and if they [politicians] are not going to use them then they need to step down for people who will,” Stepan said.

“We need to take a bolder stance on climate emergency,” 15-year-old Fargo South High School student Nash Penner said. “We have to speak up and not just as people, but as a city.”

Moorhead resident Donna Clark divested from fossil fuels recently, and said that both policy and people must make sacrifices to curb climate change.

“When we do things on our own we feel powerless,” Clark said. “It seems like we are just spinning our wheels, but right now more of us need to rise up and say ‘no more.’ We need to search our souls and determine where we can make sacrifices.”

Jacob Tesch, a molecular biologist, would not speak on climate change itself, but warned that increased flooding will lead to increased fungus infections, which can be sickening to humans on a massive scale.

“If we don’t do anything the health of Fargo citizens will suffer,” Tesch said.

Williams continued by saying that no matter if a person believes in climate change or not, there was no “downside” to finding alternative forms of energy and to eliminate the use of fossil fuels in Fargo, the state, and elsewhere.

Waabishki Giiwedin Miquay Tracey L. Wilkie, a registered member of the Turtle Mountain Band of Chippewas, stood up to say the Red River Valley was her ancestral home, and that she was grateful Fargo residents were holding discussions on climate change, adding that she hoped the city would declare a climate emergency.

Toward the end of the Town Hall event, Zac Echola asked John Strand and Tim Mahoney a question: “Will you commit to declaring a climate emergency before Earth Day next year?”