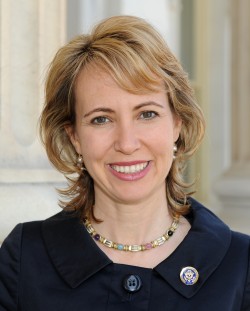 A former congresswoman who has turned tragedy into activism dropped by Fargo last Wednesday with her astronaut husband to promote “common-sense steps” to curb gun violence.

About a hundred people gathered in downtown Fargo’s Atomic Coffee to hear from Gabrielle Giffords, who was shot in the head more than two years ago at a meet-and-greet in Tucson, Ariz., and her husband Mark Kelly, who flew on four space shuttle missions. The short visit was one leg of a weeklong “Rights and Responsibilities Tour” across seven states. The tour kicked off in Nevada and ended Sunday in North Carolina. Earlier last Wednesday, the two stopped in Bismarck.

After intensive recovery from the attempted assassination, which killed six of her constituents, Giffords has emerged as one of the nation’s most recognized advocates for changes in gun policy. In January, she and Kelly founded Americans for Responsible Solutions, a political action committee, to promote the cause. At the Fargo stop, Kelly did most of the speaking, specifically urging congress to expand background checks to gun show and Internet gun sales.

“We have to make it harder for criminals and the dangerously mentally ill to get guns,” he said. “It’s a simple thing we have to do.”

But Giffords provided a powerful, inspirational presence. Standing on a ladder to be seen by the scores of supporters, she issued a call to action.

“Now is the time to come together. Democrats, Republicans, everyone,” she said to rapturous applause. “Be bold. Be courageous. The nation is counting on you.”

Kelly made sure to acknowledge the hunting culture in North Dakota and the reticence of many in the state for new gun legislation, proclaiming himself and Giffords as gun owners and supporters of 2nd Amendment rights.

“We understand the importance of the 2nd Amendment … but that doesn’t mean we can’t have some common-sense gun legislation,” he said.

In one of the two questions Kelly took from the audience, a Fargo man asked how gun control legislation can be justified given the declining levels of gun violence nationwide.

Kelly said that the issue shouldn’t be seen as an either-or choice between gun rights and new gun laws.

Most people interviewed at the event said they support strengthening gun laws.

“I’m sorry for what (Giffords and Kelly) have gone through and I admire the cause,” said Fargo resident Luanna Kennelly.

Ryan Mooney, a 15-year-old from Traill County, said he doesn’t understand why people oppose what he thinks is reasonable gun law reform.

“I don’t see why a civilian should have a military grade weapon,” he said. “There’s no reason why a hunter should have an AK-47.”

His mother, state Rep. Gail Mooney (D-Cummings), said she needs to become better informed before forming an opinion on new laws, but “would like to see responsible and appropriate gun legislation come forward.”

“We’ll never get anywhere if we don’t have discussion,” she said, noting the only laws the North Dakota legislature considered last term were to loosen, not tighten, gun restrictions.

When it comes to controlling guns, “there’s only so much we can do,” said Fargo resident Bjorn Solberg. But with mental health legislation and overall awareness of those issues, he said, “I think that can be more easily addressed on a societal scale. We’ve got to start somewhere.”

There were a few fierce gun control opponents scattered throughout the audience, including Nathan Pullen, a Fargo resident and great-nephew of former North Dakota Gov. Art Link. Pullen lauded the state’s U.S. senators, Heidi Heitkamp (Democrat) and John Hoeven (Republican), for voting against a bill that would have expanded background checks, saying the bill “was shot down for a reason.”

“We already have good gun laws in North Dakota,” said Pullen, who sports a deer tattoo and named his kid Hunter. “We have lenient laws … We don’t need expanded background checks.”

Across the room, Clint Hvinden from West Fargo, was quietly yet conspicuously showing his opposition with a National Rifle Association hat and a shirt that taunted gun control advocates to “Come and Take It.” Hvinden owns a gun shop that sells the kind of high powered rifles recent legislation has aimed to outlaw.

“The danger is not mental illness, it’s the government control,” he said.

Why do people need to own such powerful weapons and large clips?

Hvinden’s brother and gun shop co-owner Kevin Ambers chimed in: “It’s a Bill of Rights not a Bill of Needs. (They have) no right to tell me what I need to defend my family. Nobody has any right to tell another individual how to defend themselves.”

With gun legislation failing to get the 60 votes needed to avoid a filibuster in the Senate and Republican-controlled House even more opposed to stricter laws, the movement to strengthen them has stagnated after a boost of momentum following the massacre of 26 people at a Newtown, Conn. elementary school in December.

In a news conference after the Fargo event, Kelly expressed hope that the work Americans for Responsible Solutions is doing can counteract the powerful gun lobby and swing the pendulum back in the reform direction.

Although he said he and Giffords came to North Dakota to learn about residents’ thoughts on reform - not to pressure the two senators, who were asked but did not meet with the two advocates during the visit, to vote differently next time gun legislation comes up - Kelly hopes Heitkamp changes her mind on the issue.

“What polls better than 79 percent?” he asked. “Ice cream and free money.”