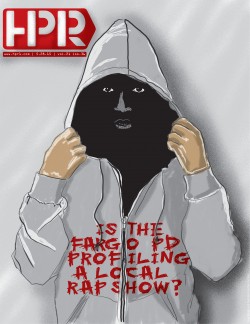 A new gang task force comprised of area law enforcement agencies warned a local venue about the gang affiliation of one of the performers, which resulted in the cancellation of an entire concert.

SpringJam was set to be held at the Fargo Elks Lodge in late April. It was promoted by rapper J Sauce, whose real name is Jason Grant. After the concert was announced, the Fargo Police Department told the Elks Lodge one of the performers had gang affiliations.

General manager Ken Evanson took that information to his board of trustees who then decided they no longer wanted to hold the event. SpringJam has since been rescheduled for June 27 in the Grand Ballroom of Moorhead’s Days Inn. However, the rapper in question is no longer a part of the event. Both Fargo police and the promoter, Grant, declined to name him.

“Whenever we see an event that has individuals involved that are of concern to us related to criminal activity, we will provide that information to the venue and we’ll give them an idea of what kind of activity they will be involved in a generic manner. And really we let them make a decision as to whether they want to hold the event,” said Lt. Ross Renner, head of the Fargo Police Department’s Metro Area Street Crimes Unit, which was recently formed to combat a rise in gang activity.

Renner declined to elaborate on what information was passed along to the Elks Lodge. Evanson, however, said the information was very nonspecific but enough to push the board to cancel the event.

“There was a picture in that advertisement, which I didn’t even look at very well, but there’s about eight of them ... they didn’t say who, they didn’t point to anything ... they just said one of them (has) a known gang affiliation,” Evanson told HPR.

“When I relayed that information to my board of trustees who are part of this and they hear the word ‘gang’ of any sense, that’s an automatic ‘we can’t do that.’”

Evanson said the police never told the Elks Lodge not to have the event.

But “even if he wasn’t (affiliated with a gang),” Evanson said, “just the possibility is a major deterrent to any bar, let alone a private club. The word ‘gang association’ coming into any establishment especially in this area in Fargo, that’s a scary situation.”

The promoter Grant is upset because he believes he is being singled out for no reason.

“Just the fact that they showed up as if there was a problem is my concern,” he said. “I don’t think they have a right to go ahead of every promoter and tell them. If they are not doing that to every promoter, then why are they doing it to me? If there’s a certain person or individual that’s in my lineup, they could have easily just told me that they have a problem with that person instead of cancelling my whole show when I have 10 acts.”

Renner said the police department acknowledges that just because someone is in a rap group does not automatically mean they are in a gang. He added the Fargo PD has not seen a rise in gang members who are also in rap groups. Police don’t pay attention to the musical aspirations of the criminals they are watching, Renner said. He did, however, say the police believe one local gang is claiming to be just a rap group when they are more than that.

Renner said there have been instances when the Fargo PD has warned venues about the criminal records of performers, but he wasn’t able to cite specific examples of other events besides SpringJam. Last year, the Fargo Police Department relayed intelligence to JT Cigarro’s about the potential for some criminal activity that could happen at SpringJam, which was scheduled to be held there. The info was enough to get the show cancelled there as well. Renner said there is a reason the police go to the venues with this information and not the promoters.

“We don’t get involved in people’s events because certainly we don’t want him or anybody for that matter thinking that we are pressuring them as a group or as an organizer to shape their organization,” Renner said. “We bring our concerns up to the event holders, who have the venue more or less, and they can decide what they are going to do. We don’t go and tell them ‘Hey, we’re telling you not to do this’ because obviously we can’t do that. We can provide them with information, and they can make a decision based on that information.”

Grant is now based in Tampa and has been promoting SpringJam every year since 1996. In all of the years the event has been held, he says it has never caused any problems, and he believes that track record should be honored. This year, the event will hire 10 security guards to prevent any problems. He also pointed to the canned food drive the concert hosts every year to help local food pantries, while lifting concert goers’ spirits.

“I think they are on a mission to classify any group they can as a gang,” Grant said. “Say like ICP, the juggalos -- they are now considered a gang. So I don’t even know if they can do shows anymore because of that. ICP are not the juggalos, but I bet they can’t even do shows now because the people who follow them call themselves juggalos.”

“My lineup (consists of) local rappers. I don’t discriminate as to who can get on stage and who can’t get on stage. If they are impressive and they have music and they want to get up on stage, then I let them do it. So if that’s too much freedom, I don’t know where the line is drawn on where there’s going to be a need for police intervention.”

Renner, for his part, said race has nothing to do with what the police or the Gang Task Force is doing. It’s all about the records of the individuals involved, he said.

“We don’t look at color. We look at criminal backgrounds and criminal intel. It doesn’t make any difference who you are. If you have those things that will cause us concern, whether you are white, black or whatever, we don’t look at that, we look at behavior and that’s what we target.”

Renner said the current surge in some levels of violent crime in Fargo cannot solely be attributed to a rise in gang activity, but it’s a factor. He cited some recent drive-by shootings as examples.The gang task force, he said, was formed to get ahead of the curve.

“Is it a big problem in scale to Minneapolis or Chicago? No, we’re not at that level,” Renner said. “But the idea isn’t to wait until that happens. The idea is to make sure we get on top of it before we get to that level. We certainly have gang activity happening within the city and we have a number of different gang individuals moving in and out of the city at times from a bunch of different areas. Really that’s what we’re making sure to do is make sure that this doesn’t progress any further than it is.”

Grant said he hopes in the future the local police department works with him rather than against him on holding SpringJam.

“My track record is clean, my record is clean. I am not in a gang, so why are they doing that to me? I take it personally because it’s my show. And I think that in the future if they have a problem they should contact me and not contact the owners and say this is going to be a bad deal. How do they know?”