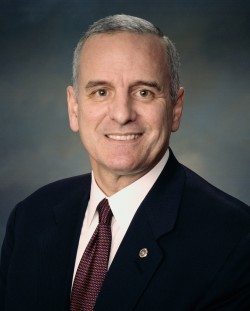 ST. PAUL -- Hours before one of the most important votes he will ever cast, Rep. Ben Lien pointed out a statue of former vice president Hubert H. Humphrey as he walked to his office through the light rain falling on the capital city Thursday morning.

For Lien, DFL-Moorhead, and other legislators, legalizing same-sex marriage in Minnesota was a natural extension of the state’s pioneering civil rights tradition. At about 3 p.m., the House passed the bill 75-59. The Senate followed suit Monday with a 37-30 vote. And Tuesday, in a rare ceremony on the Capitol steps, Gov. Mark Dayton signed the measure, making Minnesota the 12th state to recognize same-sex marriage and the first in the Midwest to approve it via a legislature. Humphrey, who helped lead the political charge for civil rights generations ago, would have been proud.

After the House vote Thursday, in the rotunda outside the chamber, hundreds of supporters sporting orange shirts that read “I support the freedom to marry” erupted with delight. Many wiped away tears. Others hugged the partners they will be able to marry when the law takes effect August 1.

“What a wonderful day for Minnesota,” said 62-year-old Dann Dobson, a member of a Twin Cities synagogue that has had several gay and lesbian rabbis, amid chants of “Thank you” as legislators joined the crowd. “It’s long overdue.”

Bill author Rep. Karen Clark, DFL-Minneapolis, told the crowd that contrary to opponents’ arguments “we are strengthening marriage.” In an interview minutes later, the lesbian lawmaker noted the 180-degree turn from two years ago, when the Republican-led legislature placed an amendment to ban same-sex marriage on the November 2012 ballot (it failed) to Thursday, when the DFL-controlled House endorsed gay marriage.

“It’s a testament to all of the incredible grassroots organizing that went on,” she said. “People just speaking their truth. You can’t stop the truth.”

High above the crowd, the first part of a quote from Thomas Jefferson’s first inaugural address written in red paint on a gold surface seemed fitting for the moment: “Equal and exact justice to all men, of whatever state of persuasion …”

While supporters were celebrating the victory, hundreds of opponents -- many with pink “Vote No” signs -- dejectedly trickled out of the building.

“God have mercy on our country,” one woman said with frustration as she descended the south steps.

After joining in prayer on the steps with pastor Jeff Evans, who urged opponents to “Take refuge in the Lord,” Evie Schwartzbauer, 26, said she expected the bill would pass.

“If our immoral culture is voting on something, I’m not surprised,” she said. “The law is wrong on abortion. It can be wrong on marriage, too.”

At the start of debate, bill opponent Tony Cornish, R-Vernon Center, set the tone for the afternoon with kind words for Clark, his longtime colleague.

“I don’t know of a kinder, more gentle woman on this floor that has a bigger heart for the environment, the underprivileged, the downtrodden, the American Indian, especially the women. I admire you,” he said.

Other lawmakers repeatedly said that although they opposed the bill, they were not bigots.

But pastor Anita Hill of Reconciling Works, a pro-gay rights Lutheran organization, said she deserves the opportunity to marry her partner of 20 years.

“We feel we’re as married in the eyes of God as we’ll ever be and we’re ready for civil marriage and the protections and responsibilities that come with marriage,” she said.

Supporters and opponents stood next to each other in seemingly parallel universes, shouting “yes” and “no” simultaneously but mostly avoiding vitriol. At one point in the afternoon, the crowd sang “Amazing Grace,” but it appeared people from both sides were participating.

The cheers and chants were audible in on the House floor and gallery, but the gallery audience -- with some sections reserved for pro-bill group Minnesotans United for All Families and the others designated for the main opposition group Minnesotans for Marriage -- sat quietly as it listened to the nearly three-hour debate.

Any hostility was muted. At one point, a man entering the Capitol who wore a Minnesotans for Marriage button told a man with a Minnesotans United poster “your rights aren’t being infringed.” The man with the poster responded under his breath, “I wouldn’t want to infringe them with you.”

Meanwhile, inside the chamber, representatives took turns making their cases for and against the bill.

Reflecting the views of many of her Republican colleagues, Rep. Peggy Scott, R-Andover, said she feared that turning marriage into a genderless institution would be bad for children -- and she accused bill proponents of misleading the public because they claimed voting “no” on the amendment would not lead to legalization of same-sex marriage but rather would simply leave marriage out of the Minnesota constitution.

“Were the people of our state lied to?,” Scott asked.

Other legislators said they were concerned religious liberty would be threatened because people opposed to same-sex marriage would possibly face lawsuits if they refused to provide services to gay couples.

But supporters pointed to a 1993 Minnesota law that already prohibits discrimination based on sexual orientation. They also claimed the same-sex marriage bill includes the strongest protections for religious freedom of any similar law in the nation.

“I stand believing we are on the right side of history,” said Rep. Rena Moran, DFL-St. Paul.

In an emotional speech, Rep. Joe Radinovich, DFL-Crosby, acknowledged he might be disappointing constituents in his socially conservative district, but in the end, he said he had to vote his conscience.

“For me, this is a vote for freedom and equality,” he said. His words were followed by a huge cheer from the crowd outside the chamber.

“History will determine whether this was the right move,” he said. “I ask you not to forget those who are on the other side.”

A few minutes later, the voting boards on each side of the chamber lit up with green lights for “yes” votes and red for “no.” Four GOP representatives from suburban districts joined all but two DFLers in voting for the bill, and it passed with a wider margin than pundits predicted.

In a speech to the jubilant crowd after the vote, House Speaker Paul Thissen, DFL-Minneapolis, noted the political risk many members, especially from more conservative rural areas that supported the amendment to ban gay marriage last year, took in voting “yes.” This prompted a “We’ve got your back” chant.

“They stuck their neck out,” said supporter Ashley Novak, 23. When it comes to getting these members re-elected, “That’s where we come in,” she said.

“I have friends and family in the GLBT community,” he said. “I can’t turn my back on these people.”

Eken, who represents Moorhead in the upper chamber, waited until a few weeks ago before revealing his intention to vote “yes,” said he supports the bill because “it’s the right thing to do.”

“It’s about civil rights and equality and it’s about religious freedom because it’s giving churches the right to decide what to do,” he said.

In his office down the hall, Rep. Zachary Dorholt, DFL-St. Cloud, said as a professional counselor he’s met too many kids who have been kicked out of their houses for their sexual orientation.

“My mission isn’t legalizing same-sex marriage, it’s normalizing something that is normal,” he said. “My mission is helping people accept people for who they are.”

In his speech to the House, Dorholt referenced (without citation) The Suburbs’ 1984 album “Love is the Law.” With Minnesota’s same-sex marriage bill, love will finally be the law, he said.

Back on the Capitol steps, 25-year-old Briana Falb-Joslin of Red Wing, Minn. placed a celebratory phone call to her 92-year-old grandfather. “It passed!” she exclaimed before thanking him for voting against the amendment last year.

Although grandpa’s always been supportive, Falb-Joslin said, when she came out to her father 11 years ago, it drove a wedge between them that endured for years. But over time, she said, he learned to accept her. She said it’s these one-on-one conversations and conversions that have made the difference in Minnesota accepting same-sex marriage.

“How can you look somebody in the eye and tell them they’re not a whole human being?” Falb-Joslin said. “Really, I’m not different than the next person. I’m just me.”