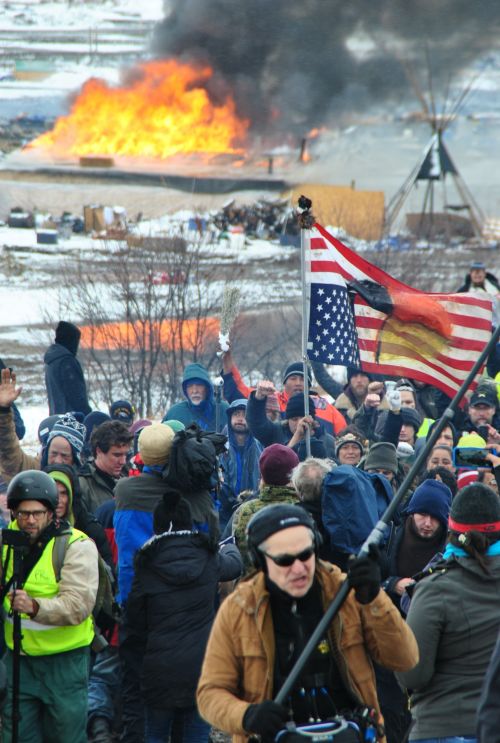 BISMARCK – Two more preemptive strikes from the North Dakota Legislative body target free speech against corporate oil interests. Although some of the bill’s wording is misleading and vague, focused on terrorism, the meaning could be open to interpretation, representatives said, and is a solution looking for a problem.

Four other preemptive strikes were passed this legislative session and include laws restricting banning plastic bags and reusable straws, gun buyback programs, limiting the living wage, and curtailing local government agricultural ordinances. The fifth and sixth strikes are known colloquially as another DAPL package: Senate bills 2209 and 2044. Both passed overwhelmingly in the Senate and the House, and were signed into law by Governor Doug Burgum.

The bills follow other preemptive strikes’ trail to ALEC, or the American Legislative Exchange Council, a powerful bill mill that has been issuing cookie cutter recommendations for politicians and lobbyists to use in introducing new laws to state legislatures.

Unable to win in the U.S. Congress, ALEC has turned to more easily influenced state governing bodies, according to The Center for Media and Democracy.

Following the Dakota Access Pipeline’s trail, six states are close to enacting or already have passed nearly identical bills clamping down on protest in North Dakota, South Dakota, Oklahoma, Iowa, Louisiana, and Texas, according to The Center for Media and Democracy and the Texas House of Representatives.

Approved by ALEC, Americans for Prosperity, Koch Industries, Peabody Energy, US Chamber of Commerce, and Exxon Mobil in 2018, the copycat bill is dubbed the Critical Infrastructure Protection Act, and it seeks to conceal actions and curtail dissent against the oil and gas industry, according to The Center for Media and Democracy.

“According to many of these legislators, these bills are a reaction to widespread protests against oil and gas infrastructure,” researcher and writer Connor Gibson of The Center for Media and Democracy wrote on March 15, 2019.

“Some of the protests have captured the nation’s attention, such as the Indigenous-led protests at Standing Rock in North Dakota and in Iowa against the Dakota Access Pipeline, opposition to the Keystone XL pipeline from Nebraska and Texas, protests against the Bayou Bridge pipeline in Louisiana, and opposition to several pipeline projects in Pennsylvania.”

In North Dakota, Senate Bill 2209was introduced to expand concealment of all records from the public that are related to utility projects.

Concealment
“Records, information, photographs, audio and visual presentations, schematic diagrams, surveys, recommendations, communications, or consultations or portions of any such plan relating directly to the physical or electronic security of a public facility, or any critical infrastructure, whether owned by or leased to the state or any of its political subdivisions, or any privately owned or leased critical infrastructure if the plan or a portion of the plan is in the possession of a public entity.”
- Senate Bill 2209, North Dakota State Legislature 2019

In other words, a person who stands in front of a bulldozer working along an oil pipeline could be charged with a felony crime, which carries a maximum of five years imprisonment.

Not only those standing in the way of a bulldozer, or others burning sage on a rural highway can be prosecuted more severely, but also the organizations supporting activists will fall under the penalty section.

House minority leader Representative Joshua Boschee voted against SB 2044, but for SB 2209, he said, North Dakota has a “good track record” of transparency, but the second bill worried him.

“I think primarily there were concerns raised against freedom of speech,” Boschee said. “We certainly don’t’ want people interfering with critical infrastructure or people cutting power lines, but I am concerned how this could target peaceful protest.”

Representative Kathy Hogan said the two bills are a part of the “DAPL package” and included a third, Senate Bill 2315, which passed and redefines and provides penalties for trespassing while hunting.

“Some of this was looking for a problem that we have no indication exists,” Hogan said.

“They surprised me banning Noem until she changes her position on these bills,” Iron Eyes, an attorney, said. “It’s a courtesy banishment. It’s a voluntary one. It’s a notice to please not come down here anymore. She’s created confusion down here.

We’re not doing these things to be a pain or a thorn in civilization or progress. We do this because we still have a sacred duty.”

Noem did not contact elected tribal leadership during a meeting with FEMA officials, Iron Eyes said. The reservation has experienced two devastating storms since last summer, and the state has provided some help, but nonprofit groups are still trying to repair houses from the massive hail damage last year.

Noem’s refusal to contact tribal authorities on issues is interpreted as either a lack of knowledge of tribal protocol or a lack of respect.

“We’re just trying to protect our national integrity and for America as well,” Iron Eyes said. “Overall, we’re all being tested. We are recognizing more and more that America was born in Indigenous blood and black slavery and racism – it’s part of who we are – it’s part of our identity, a part of American mythology. That is what we are trying to graduate from. We’ve gone through many struggles to try and liberate ourselves from those mental prisons, and it doesn’t matter what color your skin is.” 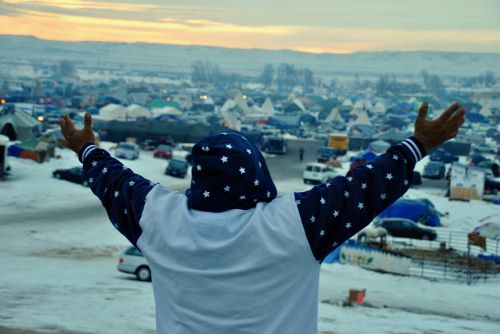 ‘Protecting First Amendment rights is a good hill to die on.’
Andrea Denault has been politically active since the DAPL controversy, acting as the legislative coordinator for the North Dakota Human Rights Coalition and later working with Reform Fargo on the city’s approval voting. During the 2017 legislative session she watched in chambers as elected politicians put “DAPL packages” together.

In those days, around the state’s halls of power, DAPL was a dirty word.

“It was commonplace for legislators to speak about it in coded language, they wouldn’t say Standing Rock and wouldn’t say DAPL, they would say our neighbors to the south,” Denault said. “What was happening down there was so bad that it was unspeakable, that was the way it was treated.”

“During the 2017 session there was a law enforcement lobby day, and one of them was essentially the local branch of the FBI in North Dakota, and they were very openly and proudly boasting how they were using surveillance against the so-called terrorists at the No-DAPL camps,” Denault said.

The new laws will not deter her from standing up for what she believes in again, if needed, she said.

“This is out of state oil interests coming in and bullying the people who are trying to defend the state and defend the water,” Denault said. “I do think it is intimidation by the state. I think some of the bills would stand up in court and some wouldn’t. What we did see is a lot of water protectors who had to go to court had their cases dismissed. We will have to rely on fairness in court and good judges, and relying on the good faith of those institutions to pull through. But, it’s been demonstrated we can’t rely on the legislature to implement any type of ethics of these bills.

"Protecting First Amendment rights is a good hill to die on." 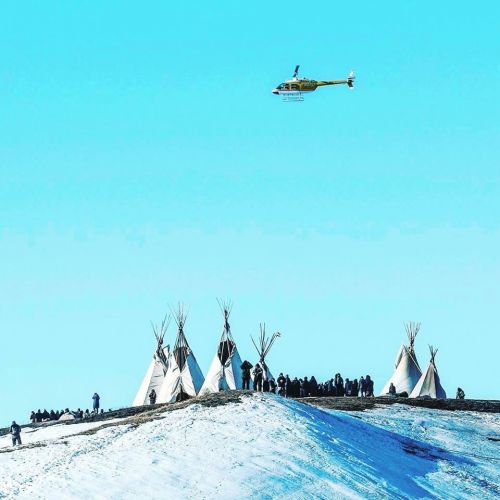 Disinformation, primarily circulated by the private security company TigerSwan, is one of the reasons politicians are passing stricter laws against protest. Recorded video from the 2017 legislature discussion regarding the “DAPL package” shows Representative Todd Porter and others saying activists at the No-DAPL camps were “eco-terrorists” and paid protestors.

North Dakota prosecutors dropped all DAPL-related charges against Chase Iron Eyes in August 2018. As an attorney, he knew the law before he went, but he too would not be deterred by laws with sharper teeth when protecting rights to land, water, or freedom of speech.

“We’re encouraged to act as a virus and call it civilization,” Iron Eyes said. “I tried to step carefully at DAPL, and we will all have to step a little more carefully and strategically and do all we can to defeat the Keystone XL pipeline and change our course as a nation. The world looks to the United States and the world is looking to Indigenous people for spiritual guidance. People are waking up, we are all waking up from a long sleep.”