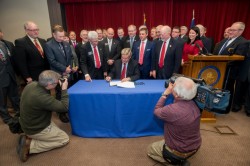 The North Dakota legislative session hits its midway point this week with many major issues unresolved. As the session got underway, plummeting state revenue projections -- due to lower crude oil prices -- have had a big impact on the agenda at the capitol. Legislators have managed to get a few things done, though they’re due for some some heavy lifting as the end of the biennial session approaches.

The biggest issue looming over early part of the session was sorely needed funding for infrastructure needs in western North Dakota communities affected by the oil boom. Because North Dakota’s Legislature meets every other year, the need has grown significantly since 2013, with some communities starving for dollars. This week, Gov. Jack Dalrymple signed a $1.1 billion “surge funding” bill to, for the most part, assist western North Dakota. State Sen. Judy Lee, R-West Fargo, said it was important that bill had an emergency clause so that they could the get dollars right away.

“The money is now available so that the various entities who will be working at improving these roads and bridges can get their projects going quickly and they can let bids this spring,” Lee told HPR. “If we waited until it otherwise became available in July, it would be too late to start that process for this construction season.”

ND Senate Minority Leader Mac Schneider, D-Grand Forks, supported the bill but said it should have been done last session to prevent the need for catch up. He said a big battle in the second half of the session will be deciding whether to allocate a higher share of the oil production tax to impacted communities so they wouldn’t have to wait for infrastructure dollars between sessions.

“We want to make sure we never have to surge again,” Schneider said. “And the way to avoid that is to provide oil-impacted communities with a fair share of the oil production tax so they can address those needs as they arise rather than coming out to Bismarck once every two years and trying to go through the Appropriations process when needs have multiplied and changed rapidly.”

Both Lee and Schneider agreed the falling price of oil has already had huge impact on the session. Lee mentioned some funds have been cut that she hopes will be restored in March, after another state revenue projection is expected to provide a clearer budget picture for legislators.

“Part of the challenge is we keep passing (bills) even though they come out of the Committee with Do Not Pass recommendations; we continue to be passing tax cuts and, on other hand, we really want to add some more money in for things that we think are important,” Lee said. “I mean you can’t go down in revenue and up in expenditures and expect that balance to work, it just doesn’t compute, the math doesn’t come out right. So we got to get serious about that.”

For his part, Schneider hopes the March forecast will result in some sort of contingency budget so that the state isn’t held hostage to dips and spikes in the price of oil.

“We can’t control the price of oil, we can control how we react to it and that’s the whole purpose of contingency budgeting,” he said. “It’s a very basic idea that becomes complex in process when you talk about the work that has to go in by our appropriators to put together these contingencies. But I think as complex as that work is, it’s much better than leaving Bismarck having overspent or having less needs unfunded.”

One big remaining item for legislators to deal with is property tax relief. A big part of that, both senators said, is reforming the way counties use property taxes to pay for social services -- a practice done for years but one many lawmakers wish to change. It’s just a question of what the numbers will look like once they are passed through both chambers.

“Tell me how at a time when we have increasing numbers of people in the state which means increasing numbers of every sort including behavioral health needs, how do we reduce the expenditures on those kinds of proposals and programs when we are spending over a $1 billion dollars on roads and bridges which need attention,” Lee said.

Schneider wants to make sure the Legislature keeps the 12 percent state property tax credit it passed in 2013. A reduction is being proposed in the Senate.

“We think any savings from county social services should come in addition to the 12 percent credit, not supplant it. So that’s a fight that we’re going to continue this week to make sure that we cut property taxes,” Schneider said.

One bill that passed the Senate in the first half but faces an uphill battle in the House provides, for the first time, statewide discrimination protections based on sexual orientation and gender identity. Schneider is optimistic the bill will pass the House.

“This is really not a controversial topic I think if you ask everyday North Dakotans, he said. “I think this is something that is supported by both Democrats and Republicans outside of the Legislature. I certainly hope my colleagues on the other side of the Capitol will embrace this sensible legislation.”

Lee wants constituents to know that even during busy sessions legislators rely on their input via email or at community gatherings - and she invited them to keep feedback coming.

“We just really appreciate it when people let their legislators know what’s going on, we’re really easy to reach particularly via email,” Lee said. “It’s very hard to reach us via phone. But emails are best if people can do that.”