The North Dakota Advisory Committee – a federally appointed group assigned by the U.S. Commission on Civil Rights in 2017 to study and then advise lawmakers on how to address hate speech and hate crimes – is comprised of a total of 11 people and held its first public meeting to listen to testimonies from area advocates, professors, legislators, and lawyers.

Little progress has been made since the committee has been assembled two years ago, Representative Ruth Buffalo said.

“No offense, but it seems your committee is a ghost committee,” Buffalo said. She made the comment after testimonies regarding the difficulties new Americans, LGBTQ, and transgender people face on a daily basis.

“People don’t know where to turn to,” Buffalo said. “Currently the state of North Dakota does not have a hate crime law nor does any city or county have any ordinances pertaining to hate crime.

“Even sitting here with the media in the room is unnerving to me; I can’t tell you how many times my stomach is flipping back and forth because we know that certain media groups in our state of North Dakota are very problematic,” Buffalo said. “They contribute to a huge division of hate in our country, in our state, in our city, and I have been on the receiving end. This reminds me of being a victim sitting in court with the perpetrator sitting on the other side of the room.” 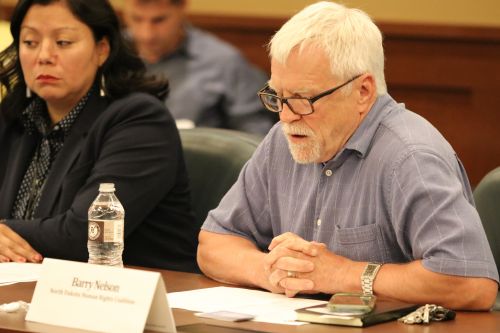 A term to describe residents in the state was once North Dakota Nice, but in many circles – especially after the militarized response to protect private oil interests during the DAPL controversy – the state is now called the “Deep North.”

“It’s not funny,” Buffalo said. “It’s not a game. People’s lives have been put in danger including my children. Based off of media’s behavior and what type of rhetoric they push and it’s unacceptable.”

Miriam Zeidman, counsel with the Anti Defamation League, which is active in North Dakota, said that hate crime laws do not punish speech and do not infringe upon a person’s civil rights. Hate speech harms an entire community by telling them they are being targeted.

Currently, the state has no place to officially report hate crimes. Reports that do come in are typically sent to the Southern Poverty Law Center, Buffalo said. 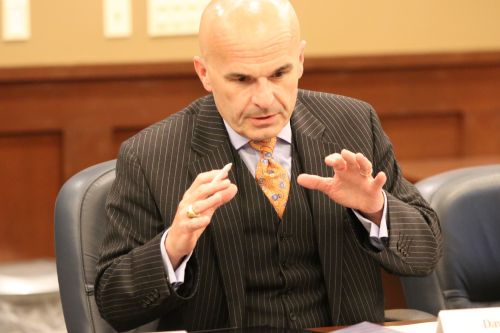 “Where are we going?” committee member David Chapman, an attorney, said. “Does that not send a message against free speech? My biggest concern is for the First Amendment and for civil rights. Creating a separate category would cross that line.”

Hukun Abdullahi, executive director of the Afro American Development Association left the meeting early after he said the North Dakota Advisory Committee were looking at the issues from a privileged white person’s perspective.

“Hate must be exposed and denounced,” Abdullahi said. “Mr. Chairman, you asked your question from a point of privilege.” 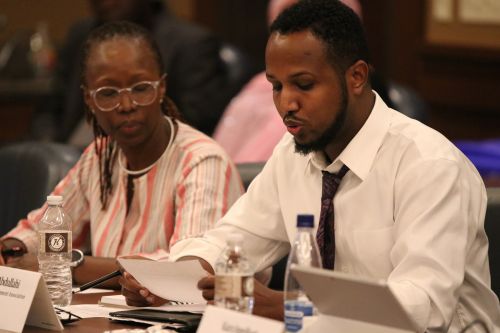 Abdullah stepped out of the meeting after the question posed by Chapman created initial tension between the committee and the panelists.

“The question he was asking me was very selected,” Abdullah said. “And like, he said ‘freedom of speech’ and I was like... Killing of Muslims is freedom of speech? Somebody like that is a chairman for the U.S. civil rights? I’m just wondering what basis they selected him? You know, harassing individuals, people of color and indigenous (people) if it’s okay, can that person be a part of the Civil Rights Commission? And then for us to be wasting our time and the chairman is just nuts. It’s like people we’re talking about, he’s resistant to change. I don’t know why we were sharing our views to him, he doesn’t have any feelings... I don’t think he had any feelings at all.”

“I find the question you are asking is a little selective,” University of North Dakota professor of philosophy and religion, Jack Russell Weinstein, said. “You’re invoking the slippery slope, which is not a proper argument.”

Weinstein belongs to one of up to 35 Jewish households in the state, he said, and has reported instances of hate crimes directed at his family including nearby residents painting swastikas on his sidewalk.

“Hate crimes are based on an ideology, a world view, a philosophic view,” Weinstein said. “When you frame it as an exercise of free speech then you are not talking about the same thing we are.

“Every civil right comes with an act of civil responsibility,” he said. “Rights are a way of guaranteeing people can live together. We don’t get to say anything we want.”

“I think I did say there is a difference between speech and conduct,” Chapman said. “People are allowed to have repugnant ideas and hold bigoted opinions, even if I don’t agree with them.”

The argument that hate crime laws would inconvenience people practicing free speech pales in comparison to those who have been on the receiving end their entire lives – Native people, African American, LGBTQ, transgender, New Americans, and more, Buffalo said.

In recent years, the state has had multiple instances of hate speech at times leading to acts of violence including: August 2015 when Makruun Hagar had his nose bitten off, or in August 2017 when Rowda Soyan and two other Muslim women had their lives threatened in a Walmart parking lot. Or when Alma Cipranic had bacon placed on her car in 2019, or when someone put dog excrement in Yusuf Mohamed’s car on a hot summer day in 2017.

Such instances placed North Dakota as second in the nation for hate crimes per capita in 2015.

“Hate crimes do occur in North Dakota,” Barry Nelson of the North Dakota Human Rights Coalition said. “We’ve had high profile hate crimes here in Fargo, which opened my eyes to the whole process to which our community doesn’t deal with hate crimes.”

Nelson pointed to the militarized approach law enforcement took with activists during the DAPL controversy in Standing Rock in 2016 and 2017.

“I’m embarrassed to say that police did not even recognize these as hate crimes,” Nelson said. “State legislators refuse to extend protections of employment and housing to LGBT and gender identity individuals. North Dakota has created a climate to allow hate crimes to exist.”

According to the U.S. Federal Register’s website, the U.S. Commission on Civil Rights was first established under the Civil Rights Act of 1957. They collect and study information and data on discrimination or unequal protections based on racial, religious and gender identities, as well as age, sexual orientation, disability, national origin.

The Commission also collects and studies information in areas such as voting rights, education, employment and housing.

Each state has a federally mandated advisory committee that gathers information and uses it to advise the Commission about their state’s civil rights issues. Their main methods of gathering information are to hold briefings with public testimonies and produce reports for the Commission.

People on the state Advisory Committees are appointed according to their demonstrated interest in civil rights. The Commission selects applicants who are from diverse professional and personal experiences and those who have varying viewpoints.

The North Dakota Advisory Committee was established on January 1st, 1957 and, like other states, aims to meet for a minimum of twice each year, and more depending on what resources are available.

The North Dakota Advisory Committee will be discussing options and prepare recommendations for the next legislative session in 2021.