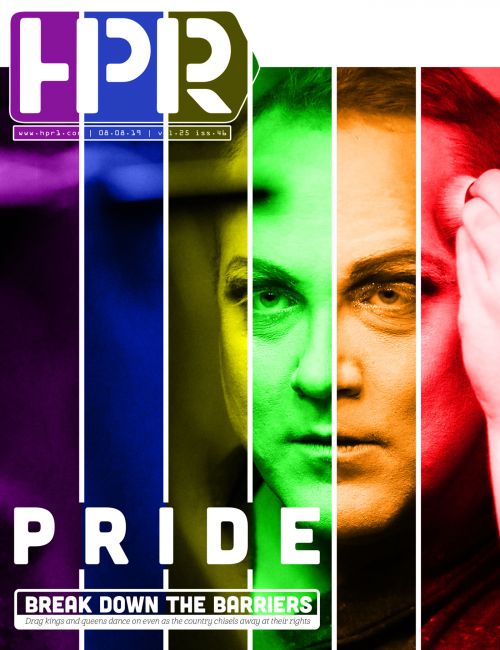 FARGO – Twenty years ago Kyle Anderson would have never given his real name. If he had been a drag queen then he would have made the makeover quietly, without pictures. Nobody at the Elk’s Lodge could have known what the before and during transformation pictures were like.

Dressed in a robe of thunderstorm blue, he stood before his bathroom mirror, took a long look. Name brand paint sticks, cream covers, brushes, and a brand new eyelash kit lie scattered across the counter. There is nothing female about Anderson. He jokes about his man boobs, but he is all male, and all gay.

His first task is to hide his eyebrows, then draw new ones. Pippin, the half-Chihuahua half-Miniature Pinscher, steps in occasionally to inspect the work. Friends sip on vodka drinks and prepare for the evening’s festivities in the kitchen behind him. They’re festive, laughing, telling each other how pretty they are as the transformation deepens.

“Yay, perfect,” Anderson said. He swings his hips to “Macho Man” by the Village People.

Chin stubble is the biggest of his worries. Mascara and eyeliner applications took him years to perfect, and he’s still learning, he said.

“It kinda took a village to teach me,” Anderson said. 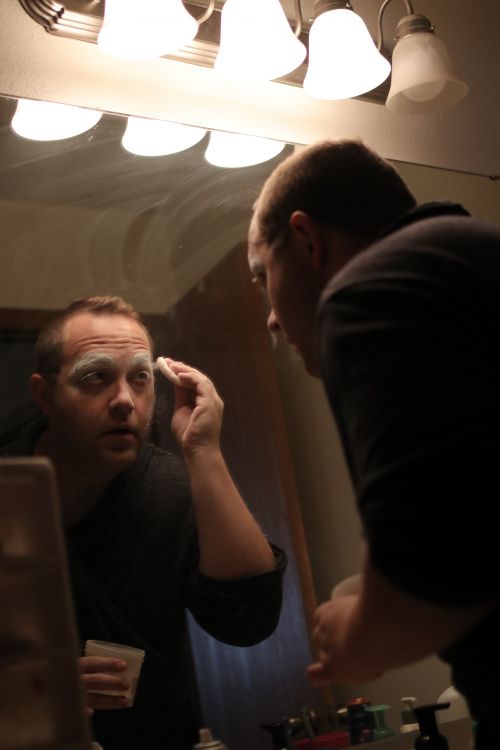 He tried dating women in high school, but it never felt right, he said. He came out as gay in ninth grade, a big deal in his small Minnesota hometown of 1,400 people. Less than a year ago Anderson lost the love of his life – his fiancé – to kidney failure. They both loved to perform in drag. He now helps run HMH Productions, and hopes one day he can take the gig full time, leave his custodial job behind.

Drag performing unlocked something inside him, he said.

“When I’m in full mode, Tequila mode, I get to escape for a night,” he said.

Once Anderson is finished he becomes a she with the stage name Tequila Mockingbird, a play on Harper Lee’s 1960 novel.

“Before performances I’m a nervous wreck, but I love it,” Anderson said. “The rush. Once that is out of the way my brain unlocks, and this character can come out. Once the eyebrows and hair goes on – then there she is. I love the art of it.”

After the last bit of makeup is applied, raising his cheekbones, Anderson tries on wigs. Doesn’t like short hair, prefers brunette, and Mockingbird – as if by magic – appears.

“This has always been scary,” Mockingbird said. “But for some reason the political climate of this world – today – I feel like we were progressing so well, but now we’re slipping back into this dread, macabre white-power bullsh*t.”

Mockingbird wasn’t referring to performing as a drag queen, but to life as a gay man under President Donald Trump’s Administration. 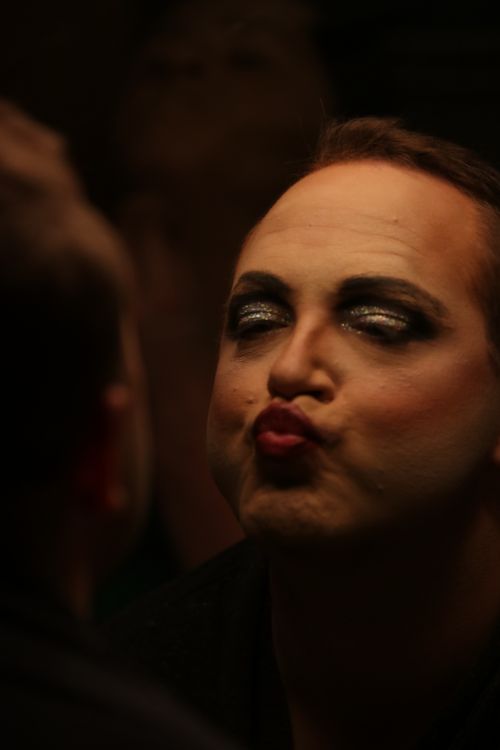 Since businessman and TV personality Donald Trump took over the Oval Office, the White House has quietly and systematically chiseled away protections for the LGBTQ community.

The attacks began online: two hours after Trump and Vice President Mike Pence were sworn into office, all LGBTQ mentions were removed from the White House website. Not long after, an official apology over the 1950s Lavender Scare homosexual witch-hunt was deleted from the U.S. Department of State’s webpage. Then under Jeff Sessions and Betsy Ross, U.S. Departments of Justice and Education began revoking protections for transgender students.

Around the same time Trump-appointed Ben Carson of the Housing and Urban Development Department has quietly withdrawn critical data collection and other guidelines impacting LGBTQ people. Supreme Court Justices adamantly against LGBTQ rights have sworn oaths, and the Census Bureau is attempting to erase LGBTQ people from official records by striking data collection regarding sexual orientation.

Among dozens of other examples, the U.S. Justice Department also created a “Religious Liberty Task Force” to further discriminate in what has been called a “holy war” against the LGBTQ community. 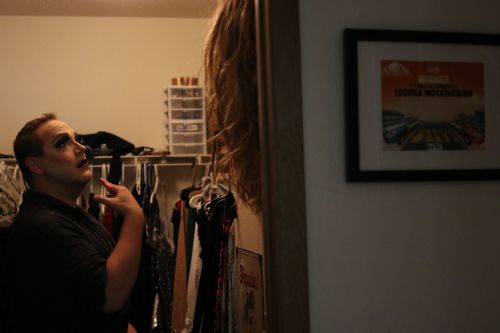 Anderson and a co-producer, Carson Jennings, are both aware of the growing political tide against men like them, but they’re undaunted. So is a transgender man who goes by the performance name of Bluer Minde – "blew-her-mind."

“Politics is a touchy subject,” Minde said. “It’s already a worry that we will go back to how it used to be, back in the ‘50s or ‘60s. But we’ve come so far and I don’t think it will ever get back to that again. We as a community wouldn’t let it get that far without a fight."

“From where we are to where we were it’s not even comparable,” Jennings said. “We dug ourselves out of a way worse hole. It only takes one to start a movement and it snowballed. Right now, those voices aren’t getting heard because of the news media and Trump.”

No one person or government should have the right to restrict another’s happiness, Anderson said. 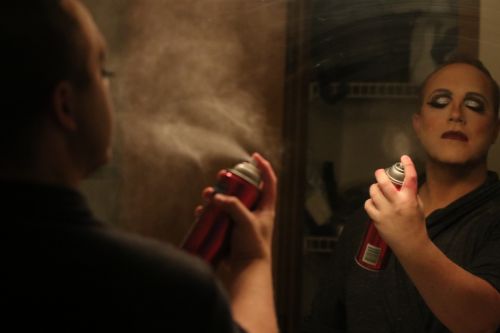 “Why?” Anderson said. “I just want to ask why. We’re living our lives, we’re not hurting you. Maybe look at yourself in the mirror and ask yourself ‘Why so hateful?’”

The fear or hatred against the LGBTQ community that seems to be creeping back into society is rooted in ignorance, Jennings said.

“We don’t need to have the same beliefs to get along,” Jennings said. “Just because it’s a drag show doesn’t mean everyone there is all gay. We love everyone. It’s a safe place for people to be together and being together is so empowering. Just come on out to a drag show and see for yourself.”

“We’re just dudes in dresses, and it’s supposed to be fun, not so serious,” Anderson said. “Break the barriers.”

Those who don’t know how to use the correct pronouns, or have questions for transgender people like Bluer Minde, should not be afraid to make a few mistakes.

“Don’t be hesitant,” Minde said. “Where we come from we know the basics. People will slip up, people will say the wrong words, but it’s an open space and we don’t bite.” 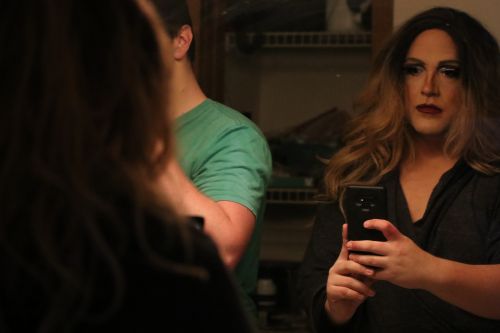 As the lights dimmed in the Elks Lodge on North Broadway, a crowded basement room hummed with excitement. A $10 cover charge to get in and the seats filled quickly. If lyrics such as the song “Pride” by Alaska Thunderf*ck were a guideline on what to wear to a drag show, then all tops must be cropped, it’s fine to dance shirtless, and no sleeves or six-inch stilettos allowed.

Everyone cheered as the drag kings and queens were introduced. The drag show kicked off Pride Week, which comes once a year every August.

“Where are my gay men?” the Ringmaster, who worked with Tequila Mockingbird as the night’s MCs, asked the crowd.

He wasn’t happy with the response. A louder cheer erupted from the lesbians.

“Where are my pansexuals at?”

Many in the crowd hollered.

The performances were sometimes comedic, sometimes dramatic, a few performers were acrobatic, but all the drag kings and queens shared one commonality: they looked happy. Surrounded by men and women – gay, straight, and trans – the seemingly ever-restricting political and religious agendas felt far away and insignificant.

Bluer Minde, who declined to give his real name because he feared receiving different treatment from his coworkers, danced on top of a table and toward the end went topless.

When the spotlight hit Mockingbird for the last time, she shined. She danced like she owned the night. And the crowd roared with cheer. 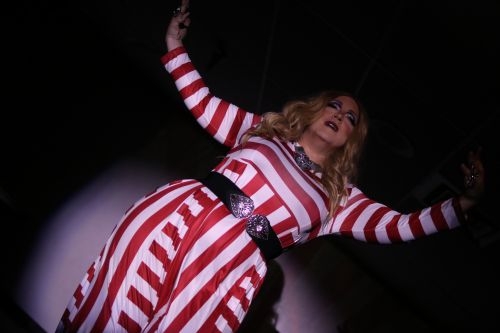 “Pride is important because we are still being killed, harassed, and discriminated against,” Anderson said. “You can be killed in some countries for being LGBT. And then we have the Nazi bullsh*t right in our community. Take last night for instance, some men in a truck made a comment when they saw some drag queens outside and said something to the effect of ‘Oh god, here come the homos.’ Also last night, someone told one of my girls to ‘go back downstairs’ when they went up to get a drink before the show. All she was doing was trying to mingle and get people to come to the show.”

On the weekend before Pride Week, two white supremacist mass shootings occurred in Texas and Ohio. One alleged killer apparently didn’t like mixed marriages; the other believed Mexicans were invading. In response to the shootings, North Dakota Governor Doug Burgum ordered all flags at government agencies flown at half mast across the state.

Breaking down the barriers to find truth is paramount for society to live up to the promises made to all Americans under the Constitution, and yet prejudice against the gay community is still rampant in Fargo, Anderson said.

As Pride Week begins, he hopes those who don’t understand will reach out instead of remaining mired in hand-me-down prejudices.

“I love it when someone reaches out with the intent to understand,” Anderson said. “Conversations need to happen.”