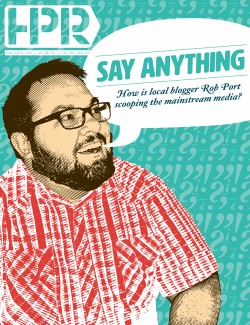 Minot-based blogger, who started in September of 2003 with readers consisting mainly of fellow bloggers, has gone on to become one of the most prominent political news sources in North Dakota. Rob Port writes for his Say Anything Blog pretty much as a one man show, save for some occasional contributors who frequently scoop other large media organizations in the state, who in turn follow suit on his stories. He went from blogging with a day job to now doing it full-time. As a result, the blog’s traffic has jumped from about 100 unique visitors a day (in its’ early years) to as much as 650,000 page views from October of 2014, ahead of the November midterm elections.

Port said his blog came into its own when it transitioned from national politics to North Dakota politics.

“I began to get the idea that there are thousands and thousands of people writing and producing content about national issues, but there are a lot fewer people writing about local issues here in North Dakota, so I shifted in focus. I started focusing a lot more on North Dakota politics, and the audience for that just kind of took off. It was filling a niche that wasn’t being served. Maybe some alternative viewpoints, conservative viewpoints that weren’t necessarily being served in North Dakota,” Port told HPR.

It’s very rare for a writer to make a living solely as a blogger. Port said, for every 1,000 bloggers, only one or two are able to do it full time. He said it took years of hard work, blogging at night and scheduling posts for the next day while he worked his day job.

“It took a long time to eventually develop the sort of readership and the sort of credibility that attract advertisers and attract sponsors so that it’s something you can do full time. It’s hard and, not to put myself on a pedestal or anything like that, it’s almost like someone like breaking in, in acting or a professional athlete.”

He makes no secret about his political views, describing himself as a conservative libertarian who is, for the most part, fiscally conservative and socially liberal. He supports gay marriage, for instance. One of the reasons Say Anything Blog has been able to gain so much prominence is Port’s willingness to report or blog about stories that are damaging to Republican candidates. For instance, he frequently criticizes Governor Jack Dalrymple and Senator John Hoeven, and two of his biggest scoops this past election cycle were about ND Ag Commissioner Doug Goehring’s comments to women in his office and ND Tax Commissioner Ryan Rauschenberger’s admission of an alcohol addiction.

“I think, probably, the moments I am proudest of and -- I’ve always thought -- the moments that give me the most credibility are those moments when I am writing about something or covering something that’s not necessarily convenient for conservatives and Republicans. I really think that’s what has set the blog apart. It’s not like I’ve been the only blogger in the state. There have been other political blogs, but I think they’ve, in some ways, been so overbearingly ideological or partisan that they’ve just never really built an audience, because people don’t take that sort of stuff as seriously sometimes,” Port said.

He last voted for a Democrat in 2010, when he publicly endorsed Corey Mock for Secretary of State against Republican incumbent Al Jaeger. He said he frequently votes for libertarian candidates and would consider voting for a Democrat again if it’s the right candidate for the office. He said he would not vote for Senator Heidi Heitkamp, a Democrat who bucked the trend of Republicans winning statewide offices in North Dakota. He doesn’t think his bias affects his judgment on stories, however.

“I would not withhold a story on somebody I consider a friend. I use my judgment. If I consider something to be news, then I write about it. That’s just the way it is. I think that people know that about me,” Port said.

“I think that over the years when I’ve been willing to criticize Republicans. I think I’ve proven that. I do not have a problem writing negative stories about Republicans ever, even if it’s a friend. I don’t know how I can prove that to you, but it’s the truth. I don’t pull punches. Now I may refrain from writing about a story that I don’t think is a story, or that I don’t think has credibility, but that’s a judgment that I apply to Democrats.”

As far as his ability to get scoops and report stories that other news organizations don’t, and as someone who has been reporting on politics in the state for 11 years, Port said he has been able to build trust with his audience -- who send him news tips all the time -- because he is constantly interacting with them on social media like Facebook and Twitter. He said most reporters covering state and local government these days only last two or three years.

“Most of my stories begin with somebody who reads the blog, who maybe works in an office or for some reason has knowledge of something, saying, ‘Hey, you should check this out’ or ‘Hey, you should request these records or you should call this person.’ And I follow up on it, and it turns out to be, sometimes, a really good story,” Port told HPR.

While he said about 80 percent of the tips sent to him turn out to be nothing, he checks most out to see if there’s anything there. He knows some Republicans obviously leak things to him to help their cause.

“People in politics are going to bring me things that are of interest to a conservative audience to write about. If I end up getting things out faster, or if I end up writing about things that maybe the traditional newspaper wouldn’t write about, that’s my bread and butter. I think the reason that Say Anything has an audience is that there is information out there that newspapers and televisions and traditional media don’t necessarily cover that I do. And also because I am mixing reporting facts with opinions. There’s probably going to be a spin on it from a conservative perspective. Now I say that when I write something that’s a fact, it’s a fact, because I check them out and am convinced that it’s fact. I also put in some opinion -- and people may disagree with the conclusions that I draw -- but I think that the one thing even most of my critics and maybe detractors will agree upon is that if I say something is a fact, it’s a fact.”

Port said his lack of an editor or journalism schooling doesn’t affect his ability to report or blog credibly. He thinks bloggers are an important part of people’s ability to get news, and even with editors, major newspaper reporters like the Forum of Fargo-Moorhead still have errors in headlines and about pertinent facts.

“In this age, more and more, the onus is on the consumer of the content to figure out what is and isn’t true. It’s always been that way, but I think proliferation of things like Twitter and Facebook, these are areas where if someone like me gets something wrong, I get called out on it. They said I don’t have an editor; but I also have an open comment section and I have a Twitter account and I have a Facebook account, and when I’m wrong about something, people can call me into account and hold me accountable for that. Because digital journalism is such a two-way street, that editor function is almost sort of performed by the crowd,” Port said.

As far was what’s next for Say Anything Blog, Port said his long-term goal is to hire a reporter in Bismarck to cover the Capitol, as he has reached his max for producing content himself. One thing that is not a part of his aspirations is to leave North Dakota to become a national blogger.

As long he continues to do so, he will no doubt have a role in shaking up the North Dakota political scene.