FARGO – Russian agents aren’t parachuting into the Dakota plains, yet, but they’re meddling with state elections and fanning the flames of the controversial DAPL controversy, polarizing, trying to provoke anarchy.

The U.S. House Committee on Science, Space and Technology released a report on March 1 showing how Russian agents targeted the Dakota Access Pipeline controversy – both sides of it.

“Pipelines and domestic energy infrastructure were a primary target of the Russian agents,” the report stated. “Specifically, several posts encouraged protests against pipeline construction…[and] emphasized and exacerbated the alleged violent nature of the DAPL protests.

“Additionally, several Russian posts focused on the counter-narrative and sought to exploit anti-activist sentiment by propagating content supportive of pipeline construction efforts, illustrating once again the Kremlin’s indiscriminate efforts to cause discord and disruption.” 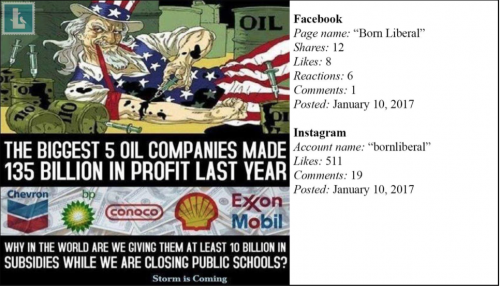 Some of the social media Facebook page names included “Born Liberal,” “Blacktivist,” “Native Americans United,” and “AmericaFirst.” Pictures included one taken by Amy Sisk, a reporter for Colorado-based Inside Energy. Sisk was unavailable for comment.

In conjunction with intensifying the DAPL debate, Russian hackers also targeted environmental issues, posting lies about historic heat waves in one post, and then saying Climate Change isn’t real on another. Other posts included false claims that the North Dakota National Guard was arresting anti-DAPL activists, and picturesque scenes of oil drills pumping in Texas.

North Dakota is the only state without voter registration, and the current Secretary of State, Al Jaeger, isn’t providing answers, according to the Associated Press. 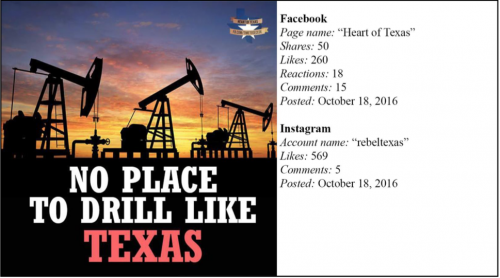 Repeated warnings from the Federal Bureau of Investigation and the Department of Homeland Security appear to be falling on deaf ears. Earlier in February the state received a “C” grade for election security from the Center for American Progress, an organization that overviews election security in every state. In the report, the CAP recommends the state take steps to improve overall security, including implementing post-election audits to test outcome accuracy and detect hacking attempts.

Head of Cyber Security for the DHS, Jeanette Manfra, stated that Russia was successful in accessing voter rolls during the 2016 election cycle.

Joshua Boschee, currently a state representative who is running for ND secretary of state, said the state’s election security protocol has fallen far behind. He issued a statement about the problem on February 12.

Now that proof exists, it is more important than ever that the state scrutinize its election procedures and for all readers to verify where their information is coming from.

“My biggest concern,” Boschee said, “is that we continue to see that the Russians are trying to divide Americans when it comes to our politics and to our election systems, and we as North Dakotans and Americans need to take this very seriously. Regardless of the outcome of who they are supporting or not supporting, or playing all sides, it doesn’t matter. It’s the fact that they’re trying to influence our decisions so they can cause distrust in our system, which is certainly concerning.”

Russian meddling has had an impact, because the hackers don’t discriminate; they want anarchy.

Boschee thinks Russian agents certainly made an impact on the general public’s opinions on a variety of issues. “Again, it looks like they’re playing all sides, so they’re trying to amplify false voices, whether it’s pro- or anti-DAPL or whichever presidential candidate they were trying to cast. Their intention is not to solve an issue for us, or have an end result, their intention is to cause distrust in our election systems and the outcomes of those.”

“Check independent sources with mainstream media reports to see what they’re saying, whether it’s the High Plains Reader or CNN or Politico,” Boschee said. “It’s certainly challenging to differentiate editorials from facts and we need to make better decisions based on facts and not feelings.” 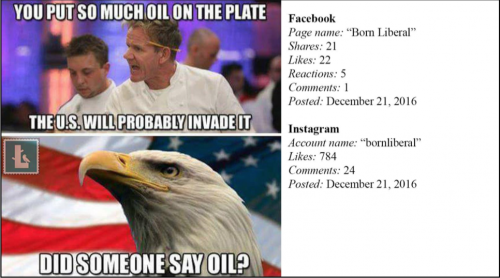 “This is another troubling example of the Russian campaign to sow division in our nation,” Hoeven said. “Russia is clearly an adversary, which is why we voted to increase sanctions to push back on Russia. That is also why I continue to support the bipartisan Senate Intelligence Committee investigation into Russian interference in the U.S.”

Although Trump’s press secretary, Sarah Sanders, denies that Trump has been lenient on sanctions against Russia, his administration refused to implement new, legally mandated sanctions proposed by Congress in January. Given a second chance after a U.S. grand jury indicted 13 Russians for fraud and other charges, and the U.S. intelligence community reported that Russia has never stopped interfering in American politics, Trump still has not empowered the military or security agencies to strike back against cyber attacks in time for the 2018 elections.

While Trump’s Administration is currently under investigation by the FBI into collaboration with Russian meddling, Russian President Vladimir Putin detailed his country’s newest nuclear arsenal this week, saying that he could penetrate America’s missile defense system.

Senator Heidi Heitkamp, D-ND, said whether Russian agents interfered in the 2016 election process is no longer questionable, it is fact.

“And this new report shows Russia has also interfered in other national issues – pushing out content on social media on both sides of some issues with the goal of creating chaos, distrust, and disorder,” Heitkamp said.

“Sadly, it is becoming clearer every day and with every new report like this one that Russia is succeeding in that effort. This new evidence of Russia wading into state and local issues to foment divisiveness and potential violence is a further example of why the federal government and states have to get serious about election interference this fall. This is why it’s so important that the independent special counsel is able to do its job to determine the facts about Russian interference in the last election – without pressure from Congress and the administration – as determining the scope of Russia’s impact is critical to our national security now and going forward.”

Daniel Tick, communications director for the Democratic-NPL Party, said Russian interference is not some far-away conspiracy theory occurring a thousand miles from home.

"Reports of Russian interference in state and local issues – including right here in North Dakota – were clearly part of Russia’s attempts to inflame tensions and polarize our national politics. These reports make an even stronger case for why state and federal officials need to take threats of foreign interference in our democracy with the utmost seriousness. Russia is a hostile actor, and we need to support efforts on both sides of the aisle – including from our own Senator Heitkamp – to enact tougher sanctions, protect our national security and hold foreign powers accountable for meddling in our affairs."

North Dakota Secretary of State, Al Jaeger, said he couldn't talk about specifics, but that the state's election systems were not breached.

"On September 22, 2017, the United States Department of Homeland Security notified our office that North Dakota election systems were targeted, but not breached, in the summer of 2016," Jaeger said. "Security measures in place to protect these systems have proven to be effective, and we continue to update cybersecurity protections as new potential means of targeting are identified. For security purposes and confidentiality requirements, our office is unable to comment on the nature of the attempt or the specific systems targeted.

"A simple way of saying it is, 'Someone tried the door and found it locked and left.' The door will remain locked."

Congressman Kevin Cramer did not respond to requests for comment.

Standing Rock Sioux Tribe Vice Chairman, Ira Taken Alive, was also contacted for comment. His reply will be added to this story when it’s available.