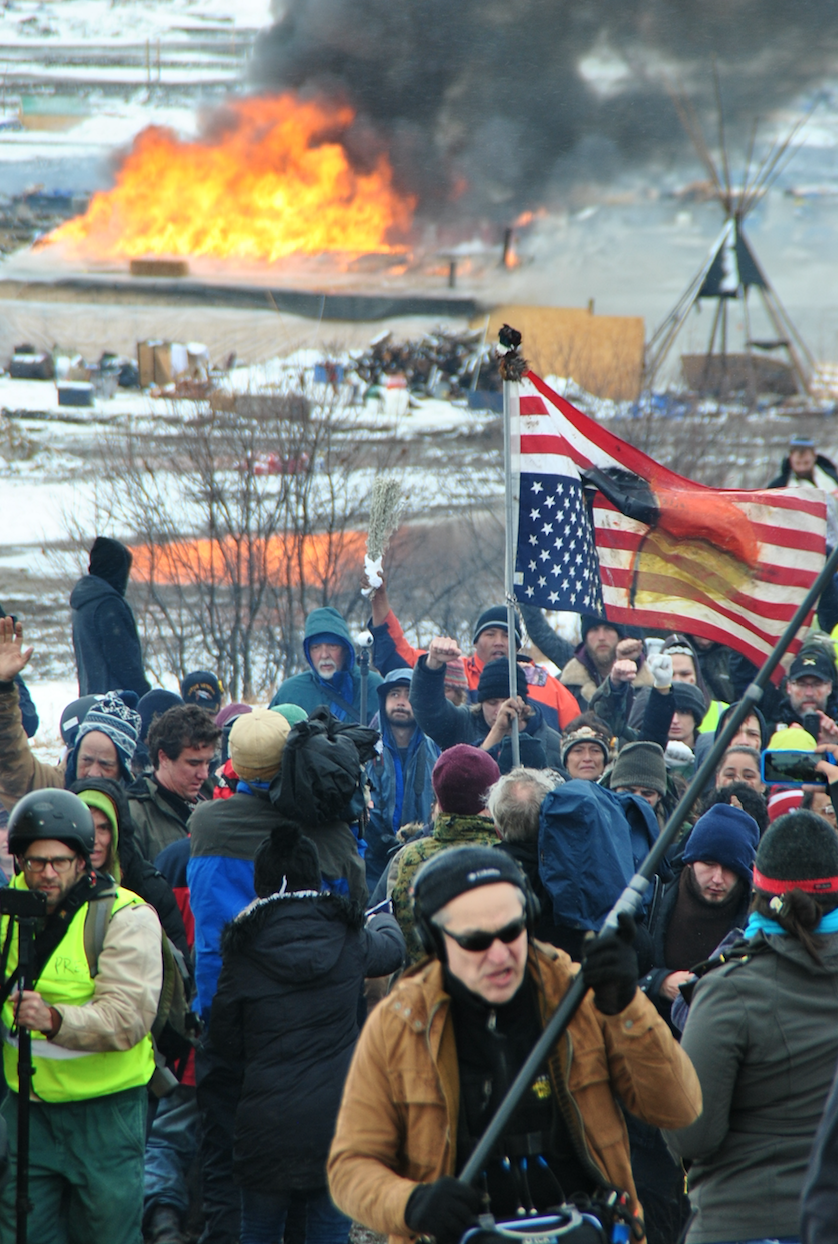 Activists were identified, then tracked by name through sightings, Tweets, and Facebook posts. Protest sites were allocated numbers, and detailed accounts of day-by-day actions were monitored and reported to Energy Transfer Partners, the parent company of Dakota Access, LLC. Police officers in areas along the pipeline route who were unwilling to make arrests were dealt with, according to documents, and TigerSwan mercenaries daily planned operations with local police.The result led to a massive misinformation campaign, the arrests of 761 activists, journalists, and Native Americans, and more than $38 million the state spent during the emergency state declared by former Governor Jack Dalrymple. In addition, at least three activists who joined the movement against the Dakota Access Pipeline, have been targeted by the FBI’s Joint Terrorism Task Force.

TigerSwan communications described the movement as “an ideologically driven insurgency with a strong religious component,” comparing anti-pipeline activists to jihadist fighters, and stating the agency expected a “post-insurgency model after its collapse,” according to the documents.

A September 13, 2016 situation report filed to Energy Transfer Partner Chief Security Officer John Porter by TigerSwan said the Dakota Access Pipeline was 99.98 percent on private land, for which all permissions had been obtained.

In November 2016, however, Republican Public Service Commissioner Julie Fedorchak stated in an interview that the pipeline is solely on U.S. Army Corps of Engineers’ lands and does not have even one case of eminent domain usage against a private individual.

“All the easements were obtained voluntarily and only go through Corps land,” Fedorchak said.

TigerSwan’s agenda toward correcting and “guiding" the media was also evident as it continuously stressed its agents would be responsible for contacting the press with corrections to their outlined agenda. 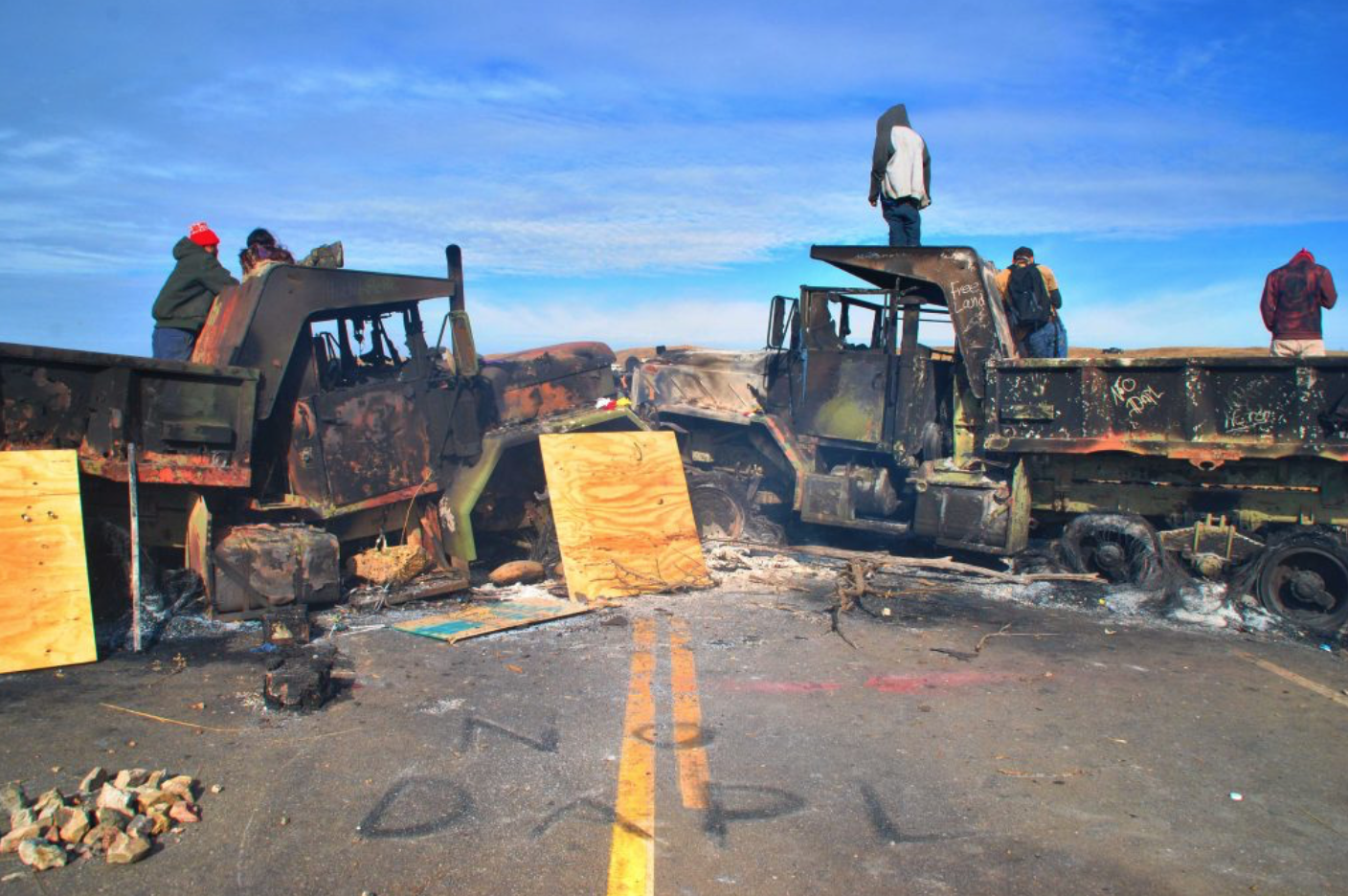 TigerSwan Inc., with offices in Iraq, Afghanistan, Jordan, Saudi Arabia, India, Latin America, and headquartered in North Carolina, has won more than 13 contracts with the U.S. Department of State, the U.S. Department of Defense, the Department of Homeland Security since 2014 worth more than $9 million, according to USASpending.gov. TigerSwan was founded by Delta Force veteran Jim Reese. The retired lieutenant colonel first worked for the State Department with counter-terrorism operations in Afghanistan, and was also a former vice president of Blackwater Worldwide, “the world’s most powerful mercenary army,” according to a book written by Jeremy Scahill entitled “Blackwater The Rise of the World’s Most Powerful Mercenary Army.”

The North Dakota Bureau of Criminal Investigation looked into private security firms involved with the Energy Transfer Partners near Standing Rock Sioux Reservation last year, and whether the multiple companies involved were authorized to work in the state. The investigation has not led to any charges filed.

The North Dakota Secretary of State holds one record for TigerSwan, LLC, established in Fargo on November 7, 2016, seven months after the controversy began.

While North Dakota militarized its police and the state legislature attempted to criminalize many forms of protest last session, the fact that a private security firm retained by a tight-lipped, multi-billion dollar corporation has “profoundly anti-democratic implications,” according to The Intercept.

While the controversy neared its end, an invisible enemy was reported extensively by activists present at the Standing Rock camps. Cellular phones were suddenly drained of power and rendered useless, hard drives were wiped clean. Electronic bugs were discovered inside the nearby Prairie Knights Casino, owned by the Standing Rock Sioux Tribe. The attacks were considered “psychologically-driven” by nonprofit Geeks Without Bounds, who helped activists fight what it called “cyber warfare.”

“While we were working in the NoDAPL camps, we knew that these tactics were being used,” Dallas Goldtooth of the Indigenous Environmental Network said. “Our devices would stop working for periods of time, hard drives would be cleared of information and footage, and from time to time camp security would identify infiltrators inside the camp who were working for Energy Transfer Partners.”

In addition to the cyber warfare, at least one private security person attempted to infiltrate the camps, and one individual armed with a fake gun wrapped in duct tape was sighted.

Kyle Thompson, of Bismarck, was disarmed by activists then turned over to the Bureau of Indian Affairs. Thompson was later handed over to Morton County, and then released, called a victim. No charges were filed at that time, but Thompson was later arrested in an unrelated case on drug and weapons charges in April 2017 by Bismarck Police.

“Now we have the evidence. This proof also tells us more about the militarization of the police and the violence they imposed on water protectors. By comparing indigenous peoples to civilians and jihadist fighters, police and security were essentially given permission to carry out war-like tactics on water protectors.”

The activists who disarmed Thompson of an AR-15 as he was headed toward the main camp, Oceti Sakowin, face felony charges.

Thompson worked for Thompson-Gray LLC, listed under Silverton Consulting International by the Ohio Secretary of State, according to paperwork discovered inside his truck. The company was not authorized to work in North Dakota, and was owned by Charles Graham Clifton, a man who has at least three civil lawsuits filed against him.

North Dakota is the second-biggest oil producing state in the United States, and has within its borders an oil patch among the ten largest in the world. Historically, the state been lackadaisical about instituting stricter regulations. A spirit of leniency toward oil companies has been fostered in North Dakota, analysts say. Criticism over lowering fines for oil and saltwater spills and property tax hikes to support big oil’s return have mounted. In January 2016 the North Dakota Industrial Commission, Oil and Gas Division agreed to scrutinize the issues, but behind closed doors.

Some of the state’s top politicians are chairmen or members of regulating agencies governing big oil and Native American interests. Additionally, big oil supports the political campaigns of Senator John Hoeven, Senator Heidi Heitkamp, and Rep. Kevin Cramer, making their voices, according to some, tainted.

The cozy relationship between TigerSwan, law enforcement agencies, the National Sheriff’s Association, and the Peace Garden State’s politicians with the oil and gas industry suggests a partnership that threatens free speech, human rights, and the very basis of democracy.

“The usage of counterterrorism tactics upon our NoDAPL movement is not only extremely disturbing, but feeds into a historical narrative of oppression that indigenous peoples and people of color have dealt with for generations,” Tom Goldtooth, also of he Indigenous Environmental Network stated. “Many of our brothers and sisters incarcerated across the country for their activism are political prisoners as a result of such disruptive tactics used by companies like TigerSwan.”