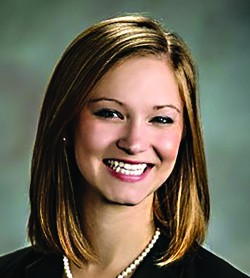 When the North Dakota Legislative session ended, many were surprised to learn that their work was unfinished, partly because the GOP majority didn’t pass one bill. It seemed hard to believe the legislature may have to return just to pass one budget bill.

HPR got some answers from Rep. Kylie Oversen (D-Grand Forks), who was recently named the state’s new Democratic chairwoman. At the age of 26, she’s one of the youngest party chairs in the country.

HPR: Why does the Legislature have to come back to session?

Kylie Oversen: When the Legislature adjourned in April, one agency budget bill was left on the table, unfinished. The Legislature has to reconvene to cast a final vote on that bill.

HPR: Why didn't it get done this spring?

KO: The remaining agency bill was the budget for the ND Public Employees Retirement System agency. The budget itself was not controversial. However, the House Republican leadership tacked on amendments related to the NDPERS new contract with Sanford Health Insurance. The Senate did not agree to those amendments and would not pass the bill, as such. Republican leadership in the two chambers refused to compromise on the issues, so instead chose to leave the bill on the table and walk away.

HPR: What does this say about the GOP majority leadership and the way they've handled things this session?

KO: This was a complete failure on the part of the ND GOP leadership. Instead of working to compromise on what is best for the state employees in this agency and beyond, and for the people of North Dakota, leadership played childish games and wasted taxpayer's time and money.

HPR: What happens if you don't come back to session? I've heard some speculation that things would be funded no matter what?

HPR: When will you come back and how will the process work? What will the cost be to taxpayers?

KO: At this point, the Legislature is set to reconvene the morning of June 16. It is my understanding that at that time, a conference committee will assemble to finalize decisions on the bill and it will then go to each chamber for a final vote. The Republican leadership is convening the session as if we did not adjourn and is treating this time like a continuation of the 64th legislative assembly. The cost for the Legislature to operate is estimated at $77,000 per day.

HPR: Is there any type of rule change the Legislature can implement to make sure this doesn't happen again?

KO: I don't believe there is a specific rule that we could implement, as I think the ND GOP is already stretching the rules a bit to make this all happen in time. Constitutionally, the Legislature is limited to 80 natural days of business. Anything beyond that must be in a special session called by the governor. The Legislature adjourned on day 78, so we technically have two days remaining to come back and finish this bill.

HPR: What are your views on this past legislative session and what was accomplished or, besides the unfinished bill, not accomplished?

KO: Overall, there were many disappointments during the session. Every attempt at addressing rail safety was killed by the Republicans in the House. Thankfully, the Senate brought back a partial pilot project with 1.5 rail inspectors. While we passed a Pre-K bill, the numbers were so small in the end that it will not reach many children and will not result in an effective program.

For the third time, the ND GOP shot down efforts to provide a comprehensive non-discrimination law that would have protected our LGBT friends and neighbors from discrimination in housing and employment. This does not reflect the views of most North Dakotans and allows unnecessary and unjust discrimination to continue.

On one positive note, the Legislature did pass strong anti-human trafficking legislation and provided financial resources to assist victims of trafficking. There is much yet to be done in the arena, but we made great strides forward.

HPR: Does coming back put a black mark on the session?

KO: The Legislature having to come back to Bismarck, at the expense of taxpayers, is definitely an embarrassment for the GOP leadership. There was no real reason a compromise could not have been reached while we were still in session, saving time and money. We owe our state employees and our citizens better than this.

HPR: How can Democrats get the majority in the legislature again?

KO: Regaining balance in the Legislature and in statewide offices in not an overnight venture. We will work to rebuild our party infrastructure, to refine our messaging and to re-energize our base. We are already working hard to recruit competent, talented candidates, which is the first step forward.

HPR: How do you plan to get young people involved in the process and voting for the legislators?

KO: Working on and messaging on issues that young people care about is extremely important. Outreach at our campuses and high schools to engage young voters is always a part of our agenda. I think giving young people a chance to meet legislators and learn more about the process is really valuable.