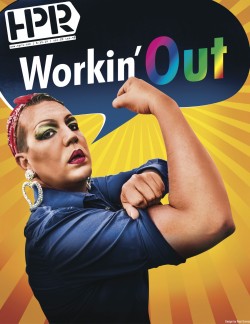 Coming out as gay, lesbian, bi or transgender to your family and friends can seem tough, even with people you love and trust. But what about being proudly GLBT in the workplace? Do employees who come out face harassment or ostracization from their co-workers or have we progressed enough as a society to where it isn’t as big of an issue? What about our community? How does Fargo-Moorhead match up to other cities in acceptance of the GLBT community in the workplace?

In honor of Fargo-Moorhead Pride week, HPR spoke with three local “out” workers for some answers. What we learned, as you might expect, is it really depends on the person, the situation and where they are working. There are different dynamics to each that can help or hurt the process. And everyone’s story is unique.

Geneva Nemzek graduated from Concordia in May. Working on campus as an GLBT activist, she really didn’t need to come out in the workplace because it was so widely known. When she got her first job post-graduation at a local library, however, it was a different story as she didn’t know all of her colleagues. A few days after she started, she revealed facts about herself in normal conversation that made it known to her coworkers that she was a lesbian.

“It was all taken very well because I didn’t have to actually really come out,” Nemzek said. “I just said I had a girlfriend because that’s kind of an important part of my life. And so it was never really like, ‘Hey, I am sitting you down and telling you that I am gay.’ But it was like, ‘oh yeah, blah blah blah, my girlfriend.’ That was sort of how I did it, which was kind of nice. I didn’t have to have that awkward conversation.”

Nemzek said coming out at work has gone really well so far and her co-workers have been really open. She feels the nature of her workplace, a library where people are regularly exposed to different ideas and thoughts, has made it helpful.

“I am always a little nervous because you just never know what people are going to say. I mean, it is kind of scary sometimes especially because I work in a public job. I am more worried about the public than my co-workers,” she told HPR. “But it’s always way easier for me to just be open because trying to hide such a big part of my life is way harder and way more time consuming and anxiety inducing.”

Greg Lemke spent 25 years working for the Fargo Police Department starting in 1986. In the mid 1990s, he came out in a letter to the editor published by the High Plains Reader in response to someone who wrote a letter saying gay people should stay in the closet. He told no one he was doing so, including his superiors.

“It was scary just because then, and as well as still now, I think it’s better within law enforcement, the police departments, it’s a pretty macho, conservative environment. It was scary just because of that and also because I was working in the schools and some people equate being gay with being a pedophile. I was nervous that I might be asked to leave the schools and not be able to teach the DARE program there anymore,” Lemke said.

The day the letter was published, Lemke brought in a copy of the HPR and showed it to a co-worker he knew would spread the news around. She told his boss and soon everyone knew about it. The reaction was mixed.

“There was a group of people who were very supportive and reached out to me; a group who just kind of didn’t really talk to me anymore -- like they didn’t know what to say. They might say hi in passing, but that was about it.

“And there was a group of people who were outwardly hostile in making jokes, in making comments to other people about me and saying they wouldn’t be willing to cross the street and help me if I needed help and someone who told me they disagreed with my lifestyle and didn’t want to work with me anymore,” Lemke said.

The reaction from his superiors was also mixed. Worried about losing his school job, he went to a deputy chief the day after the letter was published and was told it wouldn’t be an issue because he was a good worker. Other than that, not a word of backing or discouragement was spoken.

“In hindsight, it sure would’ve been nice to have gotten some support. I never was asked ‘Hey, how are things going? Anybody giving you problems?’ It was just a reaction. Just OK, it’s another day, nothing different. It could always be worse but it would’ve been nice to have a little better reaction at that point and time,” said Lemke, now an advocate for the Rape and Abuse Crisis Center.

Ray Rea is a transgender born a female who 17 years ago began transitioning to become a man. Hailing from California, six years ago Rea applied at Minnesota State University Moorhead and came out as transgender in the interview process. He was hired to teach film.

“I just wanted to be sure that they knew that I was trans because I didn’t want to risk being hired and then come out as trans and having them not be OK after I would’ve moved 1,750 miles across the country to be here,” he said.

“If I say to you that I was born a girl, there’s something about me that’s changed and probably what’s going to happen is that immediately you are going to try figure out how I am female in some way. You are going to have to try to start taking me back to my birth gender in some way, which is not something that most transgender or transsexual people want,” Rea said.

Rea told us the reaction from his co-workers has been largely positive. As he teaches film, he doesn’t feel the need to come out to most of his students unless he’s showing films he made that explore his sexuality.

“I feel very lucky in terms of who my colleagues are. They’re highly accepting and supportive even, and I know that doesn’t always happen at other universities and it’s a nightmare when it does happen so I am very grateful that I have the colleagues that I do have.”

Rea feels he has it easier than some because he looks distinctively male, versus other transgenders who may look as if they’re still transitioning between sexes. Most people are shocked when Rae tells them he was born female.

The only main incident Rea experienced here was a student telling him he was opposed to gay rights because of his religion, even though he wasn’t Rea’s student and Rea doesn’t teach or speak about gay rights to his students anyway.

As far as advice for those considering coming out, Nemzek said she finds testing the waters before completely coming out is a good idea.

“If you find a way to bring up the topic of LGBTQ without outing yourself, that kind of helps, especially because Pride is coming up. That would be a really good way to be like, ‘Hey are you going to the Pride stuff?’ And see what they say. But also it is really scary and nerve wracking but overall it made me feel a lot better because trying to watch what I say and do all the time is exhausting. “

Lemke understands the hesitation of those to come out in the workplace, especially those living in North Dakota, a right-to-work state where termination of gay and lesbian employees can be much easier. But his only regret about himself is that he didn’t do it sooner.

“There’s so many groups and people that are supportive that I would just really encourage people to do it because it’s so difficult being in the closet. You are making up stories, you are not being honest with people, you are not living honestly and I was just would highly recommend it to people. And to reach out to others who have done it. It’s nothing new.”