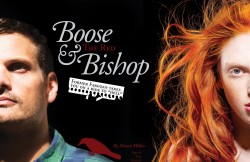 In the early 2000s, High Plains Reader published an article by writer Greg Boose titled “Three Older Women Stand in Line to Yell at the Author James Frey when Malcolm-Jamal Warner Stops By with a Two-Liter of Cherry Coke Under his Arm.”

Years down the road, Boose published the piece on his website and the one-and-only No. 1 bestselling author of “A Million Little Pieces,” James Frey, contacted Boose to say he enjoyed the piece.

“(Frey) was collaborating with a bunch of other writers where he was doing this young adult project where he would decide on a series, an idea, plot it out with somebody and then write it together,” Boose said.

Boose pitched about a dozen ideas to Frey and one in particular caught the best-selling author’s attention. It’s the premise that fueled “The Red Bishop”: “A group of teenagers go to spend the night at a local haunted house, nothing happens; the main character goes next door and something happens.”

“(It’s) very vague, very short compared to the other ones where I had like four paragraphs – and what will happen – and they were all ones that I thought they’d be more interested in and this was the one that he wanted, and I think it was because he hadn’t done any thrillers yet -- he hadn’t done more of a scarier book.”

So while writing “The Red Bishop,” Boose would send every 40 pages of new copy to Frey and his company for feedback.

“What was interesting about that whole thing was he seemed to have a formula … kind of broken down on how young adult books, successful ones, work,” Boose said.

For example, by page 10, a certain character needs to be introduced; by page 40, the main conflict must be clearly established and in play. Boose said it was especially helpful because “The Red Bishop” is the first young adult novel he’s written.

“It’s almost like somebody is holding your hand a little bit, which is helpful, but at the same time, if you want to go in a different path that you feel in your gut, that’s maybe the way you should go,” he said. “But if these people are the ones behind your book, the ones that are kind of the engine behind it, you should take their opinions very much into consideration.” 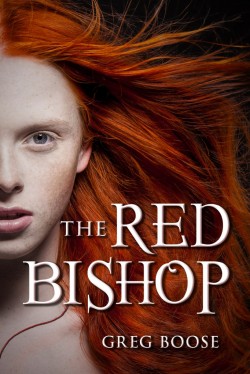 The book centers on main character Lake Price, whose brother mysteriously went missing out of his basement four years ago. She and a group of friends go out to visit a local haunted house in Cape Cod and, of course, nothing happens. The group goes next door, into the basement, and “things” happen, including “the start to something she can only finish” and the bombardment of a coven of witches.

The haunted house’s nickname is Hell, which is extracted from a memory of a haunted house Boose visited during his early college years. He said he was able to relate his experience of visiting Hell back then to the story of “The Red Bishop.”

“(My friends’) personality shined through in the scenes with the kids exploring it and checking it out -- some people were taking it more seriously than others,” Boose said.

Boose said he also looked to “The Blair Witch Project” for inspiration while writing some of the book’s scarier scenes.

“I’m not really a bloody or gory kind of horror fan. I love that it was frightening in everything that you did not see,” he said.

To help promote “The Red Bishop” online, rather than “inundate people with sad ‘buy my book’ posts,” Boose has been reaching out to his favorite artists, including ones he doesn’t know from across the country, to design art inspired by any element of the book. So far, Boose has posted six pieces on several of his media outlets, including Facebook and Tumblr. Another four to five new pieces are on the way.

One art piece in particular is from a 13-year-old girl, which has been helpful as she is part of the book’s target audience. “She was a huge fan of the series that I ghostwrote for, so she’s been willing to read anything I was putting out there,” Boose said.

All the latest art pieces can be found on artoftheredbishop.tumblr.com. 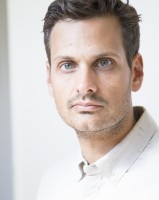 Boose has contributed for a number of publications including The Huffington Post, Chicago Public Radio, NFL.com and Time Out Chicago, to name a few. He has also been a ghostwriter for a couple New York Times best sellers. (Google search it to find out more). Not to mention, while going to school in Moorhead, Boose ran his own satirical publication, The Tooth, later shared with the High Plains Reader.

To learn more about this prolific, comical and imaginative writer and to purchase “The Red Bishop,” visit Gregboose.com.