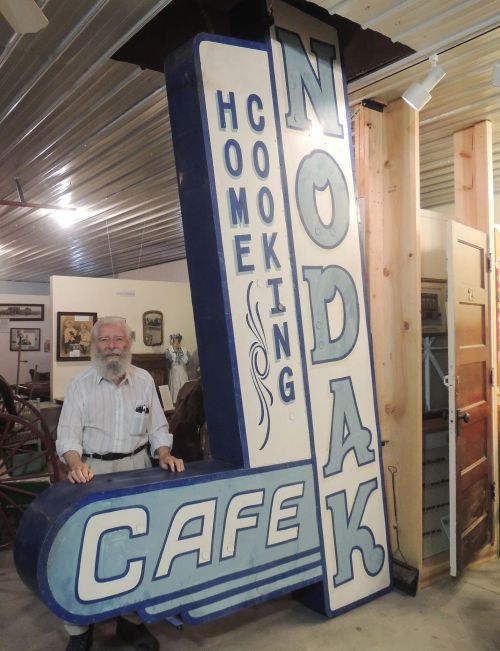 “There it is! Ellendale!”

“A water tower, groves of trees and buildings among them in the morning sunlight. I’ve just given in to the shivering which has been almost continuous the whole trip. The watch says seven-fifteen. A few minutes later we park by some old brick buildings. I turn to John and Sylvia who have pulled up behind us. ‘That was cold!’ I say. They just stare at me fish-eyed.”

“The town is clean and fresh and unlike the one we woke up in this morning. Some people are on the street and are opening stores and saying, ‘Good morning’ and talking and commenting about how cold it is. Two thermometers on the shady side of the street read 42 and 46 degrees. One in the sun reads 65 degrees.”

These paragraphs are part of a cameo appearance Ellendale makes in one of the most unusual—and most famous—books of the 20th century. “Zen and the Art of Motorcycle Maintenance: An Inquiry into Values,” describes a motorcycle journey from Minneapolis to the west coast that author Robert M. Pirsig took in 1968. That trek is, though, only one aspect of a multi-layered narrative that struggles with the most profound questions of life and meaning. It was not easy to read, and it fell outside all the typical book categories. Pirsig submitted his dense, lengthy manuscript to 121 publishers before one, a reluctant editor at William Morrow Co., agreed to back it. It was a good decision. Within three months of its 1974 publication, the book sold 50,000 copies. In the next three decades it sold more than five million copies, and was translated into at least 27 languages. A British journalist speculated that the book’s popularity made Pirsig “probably the most widely read philosopher alive.”

On a sunny Wednesday morning on August 14 this year, a trim, bushy-bearded gentleman stopped by the Coleman Museum in Ellendale, his small car bulging with the gear and miscellany of a long distance traveler. He introduced himself as Henry Gurr, a retired nuclear physicist who taught at the University of South Carolina. This was, he explained, his third pilgrimage retracing the route Pirsig detailed in the famous book. Professor Gurr had also studied Pirsig’s intellectual formation, and discovered the teacher, Sarah Vinke of the University of Montana, who provoked both the questions and the quest that eventuated in the writing of “Zen and the Art of Motorcycle Maintenance. “ Gurr pulled out a copy of his recently published biography of Vinke, titled “A Woman of Quality,” and donated it to the Coleman Museum. And then, in fine professorial form, he began a dialogue that consumed the entire afternoon and extended through the family meal we shared at the Fireside. “The book changed my life, and the life of my students as well,” Gurr explained. Absorbing its meaning took a lot of patience. Then he began to assign the book to his physics classes, who warmed to it quickly, some reporting personal transformations from its influence. And so for several decades, Gurr has been something of an evangelist for the book and for Pirsig himself, whom he befriended and with whom he had regular correspondence until the author’s death in 2018. “The book is now among the classics,” says Gurr, “right along with Herman Melville’s ‘Moby Dick.’ It is among the most widely read philosophy books. It is among the top 100 spiritual books of the 20th century, because it makes you think about yourself and your values. HarperCollins ranks it among the top 100 novels. It’s widely regarded as one of the best travelogues of the modern era. And it’s also a whodunit.”

When he retired from his teaching job, Gurr deepened his long, patient, intense quest to better understand and share the book’s insights. And he began to retrace Pirsig’s tour, taking in the sights and sounds, meeting people, and taking pictures.” All the while he pondered the book’s deep and detailed philosophical “chautauquas,” the extensive inner dialogues that preoccupied Pirsigs’ mind while cruising on two wheels. “My goal was, every time Pirsig mentioned something along the travel route, I would find it and photograph it to illustrate that passage from the book. I took about 3,000 photographs in my 2002 trip and follow up trip in 2006.” Gurr’s website (venturearete.org) contains a huge trove of writing related to Pirsig and his book. And it hosts “over two pictures per page to illustrate what Pirsig or Chris (his son) or the Sutherlands (his motorcycling companions) saw.”

Gurr’s slow, deliberate manner, careful words and thoughtful responses all point to him having imbibed deeply from the philosophical spring he discovered through Pirsig. “You have to read it several times before you really begin to catch on to its full depth and meaning. But once you do catch on you’ll find it’s a life-changing book and one that is very valuable and helps you personally to understand how to use your own mind to proceed effectively and with quality.” Though oriented in a philosophical direction, Gurr (like Pirsig before him) has little use for abstractions that don’t connect with real-life experience. For him, the book has pointed toward an understanding of minds (both our own and others) that can enable individuals to gain profound “flashes of insight” in addition to a stable basis for one’s self-concept.

Those familiar with Pirsig’s class will know that whatever else the book is about—the author himself admitted that it’s not really a text on Zen, nor a text on motorcycles, nor a text on maintenance, though it contains all those things—it is in reality a deep and extended meditation on the idea and pursuit of quality. In a throwaway world, where products are stamped out by the millions and pass from view in a relative instant, a world that often treats individuals as little more than extensions of those disposable items, there’s a deep hunger for what is of real and enduring quality, what is worthwhile, what will last. What will give human beings the meaning and purpose and insight for which they are designed.

Henry Gurr’s appreciation for roads and landscapes and ecosystems and small towns—all of which Pirsig details with an artist’s insight—has been deepened by his travels and studies. And he loves all those things, including the towns, including Ellendale. He finds in them many manifestations of the quality—expressed by the Greek word arete—that has enduring substance. And it was a book that brought all these things to his consciousness. Gurr is convinced that this quest will continue long after the present generation. “People a thousand years from now,” he says, “will be reading ‘Zen and the Art of Motorcycle Maintenance’ and wondering, what happened, and how and why it was created. And they will want to know more about what he saw along the route.” And, one imagines, they will want to know more about those small North Dakota towns described in the text.