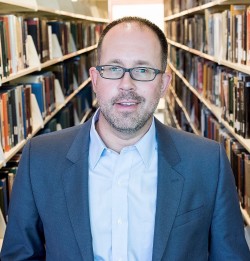 Michael J. Lansing, author and associate professor of history at Augsburg College, will host a reading event for his new book, “Insurgent Democracy: The Nonpartisan League in North American Politics,” on Thursday, Dec. 3, at 7:00 p.m. at Zandbroz Variety in downtown Fargo. Lansing will give a reading, lead a discussion and then sign copies of his book.

The Nonpartisan League (NPL) was a radical political organization that began in North Dakota in 1915 by A.C. Townley, a flax farmer and political organizer who gathered farmers across the state to band together against exploitative corporate interests, particularly grain merchants, banks and railroads. The NPL became widely popular in North Dakota and gained prominence throughout the Midwest and Pacific Northwest during the late 1910s. Before the party’s collapse in the 1920s, there were over 250,000 paying members.

As a warm-up for the upcoming book event, High Plains Reader discussed the history of the NPL with “Insurgent Democracy” author Michael J. Lansing.

High Plains Reader: When did you first become interested in the history of the Nonpartisan League?

Michael J. Lansing: I grew up in the Twin Cities. I also have deep family roots in North Dakota. So I’ve always been interested in the Northern Plains and Upper Midwest. I had read about the Nonpartisan League and thought that it might be interesting to learn more about it someday. Then, in 2007 and 2008, I was working with students at Augsburg College on environmental issues. I quickly realized that it was easy to discern what needed to be changed. But I didn’t know exactly how we could make changes in our institutions and communities. Studying movements in general and the NPL in particular suddenly took on a new urgency. I wanted to know more about how its members – regular people like you and me – used politics to improve their lives. Learning more about their civic agency approach to politics clarified a lot for me.

HPR: Would you define the NPL as a socialist movement? Populist?

ML: Both ways of doing and thinking influenced the NPL, so it is difficult to characterize the League as strictly one or the other – though it definitely shared more with earlier popular movements. Observers – then and now – often describe the NPL and its program as socialist. In the 1910s and 1920s, some branded the League as socialist to denigrate the NPL. Today, people on the left often want to reclaim a socialist past and imagine these farmers as radical, just to reassure themselves that there were other options. As a historian, I take a different approach. First, it’s important to note that in the 1910s, the Socialist Party aggressively distanced itself from the NPL. Second, we need to consider context more generally. League farmers can be envisioned as radical (especially in their commitment to citizen-centered democracy) by the standards of our time, but they were not especially radical by the standards of their own. Many of the NPL’s leaders came out of the Socialist Party. That said, most of the farmer members of the League showed little interest in socialism. Instead, they insisted on a moral economy premised on accumulation without concentration. In other words, Leaguers were committed to capitalism, though, as small property owners, they opposed corporate capitalism. In fact, the NPL grew out of cooperative movements (especially the Equity movement) and insisted that government should establish state-run competition in various economic sectors. It pushed for publicly-owned enterprises to compete with private corporations and bring equity to the marketplace. Convinced that markets were the beating heart of the republican experiment, the NPL nonetheless insisted on state-imposed market fairness to protect their own farms. To be sure, the League’s roots in cooperative visions of the economy grew from earlier populist movements. But in crucial ways, the Nonpartisan League veered from the trajectory mapped out by Populism. For instance, it did not plan to operate as a third party. Furthermore, it focused on local and state politics rather than the national stage. There were some other important differences, too.

HPR: Was the NPL strongest in North Dakota and Minnesota during its peak in popularity, or were there other states in which it enjoyed a similar level of popularity/political relevance?

ML: The League story really transcends North Dakota and Minnesota. That surprises people. But it’s important to remember. The NPL attracted a great deal of attention around the country, and national media such as The New York Times and The Nation kept a close watch on the NPL. By 1920, some observers believed the League would transform the nation’s politics. In fact, by 1919 the NPL operated in 13 states and two Canadian provinces. Besides taking power in North Dakota and consistently challenging incumbents in Minnesota, it secured primary victories in Idaho in 1918 and in Montana and Colorado in 1920. Furthermore, the NPL in Alberta pushed the United Farmers of Alberta (UFA) into electoral politics in 1919. The UFA took over Alberta in 1921. During the early 1920s, important third parties – such as Idaho’s Progressive Party and Minnesota’s Farmer-Labor Party – also grew out of NPL organizing.

HPR: What is the legacy of the NPL?

ML: In “Insurgent Democracy,” I argue that the NPL was the most significant challenge to party politics-as-usual in American history. I also claim that it was the most successful agrarian movement in American history. To be sure, the national NPL office closed in 1923, and the League soon thereafter merged with other movements in most states. But the state bank, state mill and state elevator in North Dakota all stand as a living testament to the NPL and the aspirations of its members. Almost 100 years later, all three are a great success. Few American political movements can point to such institutional longevity. I also think it’s important for readers in other parts of the country to recognize that one of the most innovative political movements the nation has ever seen was invented by farmers in North Dakota. That’s one of the reasons I wrote the book.

HPR: Do you feel the NPL is relevant to today’s popular movements? Are there lessons from the rise of the NPL that can inform similar movements today?

ML: The League invented a number of tactics and strategies that could be useful to movements today. The genius of the nonpartisan approach to elections, for instance, is too often overlooked. Sidestepping political parties allowed the NPL to offer those without influence a chance to shape their society. As a candidate-endorsing political organization, the Nonpartisan League took advantage of the newly created direct primary to bypass entrenched politicians. They simply backed anyone who supported the League’s program, regardless of party. Funded by membership dues, and built around adherence to a specific platform that represented the shared self-interest of an otherwise heterogeneous group, the NPL transcended differences and created a cohesive voting bloc with real power. The economic platform of the NPL – to deploy a public option that created equity in the marketplace – seems strange to us today. It does not fit on the standard political spectrum. Small-property holders anxious to use government to create a more equitable form of capitalism cannot be easily categorized in contemporary political terms. Their cooperative movement to protect private property from corporate inroads defies easy definition. Yet the League embodied an older, alternative political economy even as it embraced modern culture. It reminded Americans that corporate capitalism was not the only way forward. In a time when talking heads typically ignore moral economy in their economic analysis, the NPL’s perspective deserves our attention. It also can help us restore a broader political imaginary – something I think we desperately need in the U.S.

HPR: Could you share any favorite anecdotes or interesting pieces of information you learned during your research?

ML: I found all kinds of great stories. Many of them are in the book. One of my favorite sections is about how the NPL rank-and-file settled on the goat as a symbol of their political insurgency. Soon after the League adapted the goat as the organization’s symbol, an NPL member wrote and distributed a play titled “The Donkey, the Elephant And the Goat.” He carefully designed the production to be “Presented on Any Platform or stage” by “High School Boys or Grown-ups.” In it, a goat informed supporters of the two major parties that “the methods you employ are dead.” Instead, “We make the law the advocate / Of Common people mainly / By placing it beneath the state / Where it can serve humanely.” NPL newspapers argued that the script made for “Fine Campaign Material and Good Reading” for “25 cents per copy.” Good stuff.