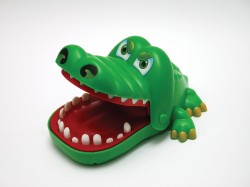 My daughter was once bitten so hard by a playmate that a forensic lab could have matched the bite mark to dental records in order to identify the puny perpetrator. While this pretty much undermines the daycare’s policy of keeping the offending child’s identity confidential, the fact that kids of this age bite is not all that surprising. Between the ages of about two and five, children often bite one another for a variety of reasons including expressing emotion and language. Biting is also an extremely effective tactic for getting another child to drop a toy you want.

That might sound mean, and indeed you might be tempted to punish the offending child, but in reality kids of this age don’t really have the necessary cognitive maturity to be mean. They just haven’t reached that stage of development yet. Psychologists distinguish between hostile aggression, those acts that are designed to hurt someone, and instrumental aggression where the child uses aggression in an egocentric way as a means to an end. The two-year-old simply doesn’t have a mental concept of what other people want; they only know what they want and in the case of biting -- not to mention throwing a tantrum at the check-out lane at the Target -- how to get it. It isn’t until about age five or six that kids reach the stage where they understand that other people too have desires, thoughts, wishes, and intentions, and that these might conflict with their own.

Parents are used to the idea of stages, and we use it for better or for worse to explain and excuse a variety of our kids’ behaviors. From tantruming two-year-old to back-talking teens, we tell ourselves “It’s just a stage.” Many child development theories also use the idea of stages. Some have left our lexicon with a variety of well-worn phrases to describe stages in development, including Freud’s “anal” personality and Erikson’s “identity crisis.” Jean Piaget was the original arm-chair psychologist whose theory of child development relied on observations of his own three kids. After describing a stage in his oldest child, he went on to make predictions and devise tests of his theory with the second and third.

Theory-testing aside, there are other advantages of noting the stages of child development. For one thing, it’s nice to have a heads-up when your kids are about to experience tough times, from precocious puberty to the first day of college. As parents, it’s natural to try to apply what we have learned from one child to the next. With one now in college, my husband and I have come to learn a lot about how to prepare our youngest for this next stage of development. Our oldest even took us to task for failing to provide him with important childhood experiences that he realized in retrospect were valuable after all. He even created a list of complaints against our inadequate parenting: failed to force me take up a musical instrument; did not insist that I do more community volunteering; denied me the opportunity to experience more character-building failures (it turns out that these are all necessary components of a college application essay). He taped the list to his bedroom door, Martin Luther style, and when the complaints reach 95 we are compelled to lead a child-rearing reformation.

If child rearing involves learning from the mistakes you make with your first child, then we can surely use the list to do better with our next child. Like many parents, I hope to do better with the second one as her success represents our retirement “backup” plan. That's why they call it child rearing: “child-backing-up” just doesn't sound right. It’s more like a traffic sign you see outside the teen driving school. What I’ve learned about the stages of child development might not be enough to propose a grand new theory, but it helps me to get through the day-to-day struggles of raising kids. After all, I knew enough not to get angry with the little boy who bit my daughter. And when she was sent home the next day for biting the other kids I just sighed and reassured my husband, “Don't worry, she’s just going through a stage.”