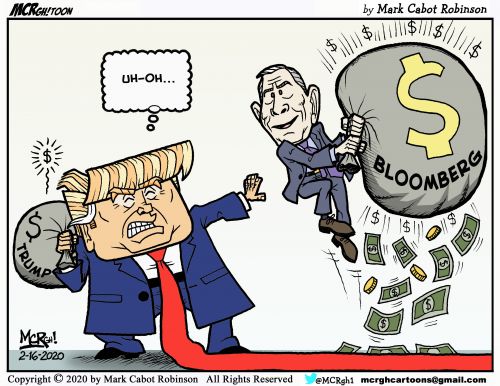 No one knows how much abuse and humiliation the Sanders faction is willing to endure to remain in the bosom of the corporate political beast.— Glen Ford, Black Agenda Report

First, it’s my sense that the predator class and its collaborators all-out effort to smash Bernie Sanders is not based on fear that his neo-New Deal reforms will ever come to pass. In the highly unlikely event that Sanders gains the White House, the elites know his proposals, like Medicare for All and the rest, can be easily deep-sixed by using all the methods already at their disposal.

However, the bipartisan establishment is extremely risk averse and liquidating Sanders’ moderate Political Revolution carries potential perils. If not perfectly finessed, the effort might create a legitimacy crisis for the ruling class and its system. This, in turn, could precipitate dangerous consequences, so better to pull out all the stops now. While the oligarchs aren’t omnipotent I wouldn't bet against them.

One of the major risks is that Sanders becomes president but against all odds, refuses to be cooped by a few meaningless compromises and watered down reforms. His record suggests otherwise but what if he undergoes a Saul to Paul conversion and takes a radical confrontational stand? Barring that, the elites can’t be certain that after Sanders takes office and sees what he’s up against he won’t tell his followers to wait for 2022, 2024 or some unspecified future date. And even assuming that he did, what if a critical mass of his supporters fail to heed the sheepdog’s bark and engage in some destabilizing, radical behavior like widespread nonviolent civil disobedience that paralyzes Washington,DC.? All of these troublesome possibilities can be avoided by denying Sanders the nomination or barring that, the Oval Office. Even then, as writer and musician John Eskow asks, “How will people respond when they see the last pretense of democracy stripped away?”

Second, if things don’t work out as many young people hope, it would be wrong to blame the Senator. Except for brandishing a self-described moniker containing the word “socialist,” Sanders has been faithful to his convictions since at least the late 1970s. In my view, he’s not a genuine socialist under any definition with which I’m familiar and terms of foreign policy is indistinguishable from mainstream Democrats. But what one sees and hears is what one gets and that’s apparently more than enough for many people.

In 2016, after being denied the nomination, Sanders didn’t bolt the Democratic Party and worked to elect HRC, again entirely consistent and no surprise to anyone who’s followed his career. At that point, many good people, especially youth, chose to project their hopes and dreams onto Sanders,not unlike what some did with Obama in 2008. These soon-to-be fervent followers saw what they wanted to see instead of doing some research and hard thinking.

It’s hard to find fault with these young people — who’d never even known an LBJ, the last liberal president — warming to Sanders. When Sanders said the country shouldn’t be run by billionaires and promised some needed reforms, they responded “Hey, if this is socialism, sign me up!”

Now, I have enormous sympathy for these soon to be disillusioned folks and have some among my closest friends and in my family. I must add that I feel we’ve let them down, including in some cases in the college classroom. But try as I might, I‘m less patient with older lefties who’ve had the luxury of experience, time and access to history to fall into this trap.

What’s troubling me now is that as events unfold, I expect to see angry ad hominem vitriol from some Sanders supporters directed at fellow leftists. Why? Because they failed to get on board or if they did, were insufficiently enthusiastic or raised some uncomfortable questions. Unless things change, I fear this will not end well.