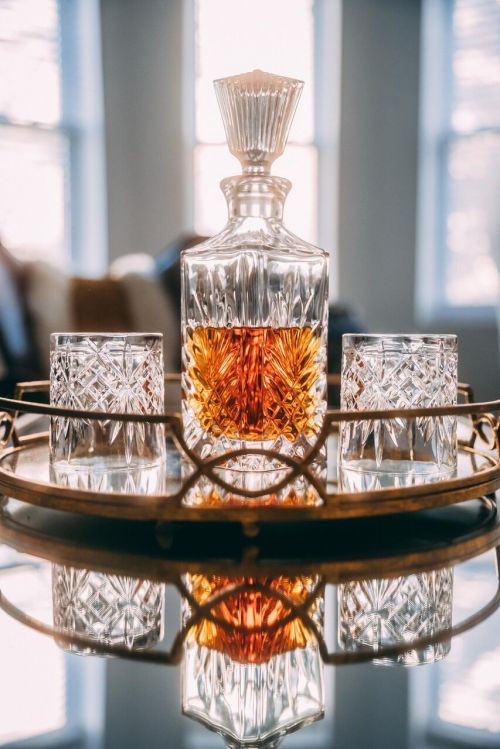 I Prefer Blended Whiskey Over Straight Whiskey
I still remember the day as a third grader coming home after walking uphill from my socialistic country school of 24 students and watching socialistic electrical workers installing power to our capitalistic barn. The son of a very wealthy family of capitalists named Roosevelt from New York had introduced and passed the socialistic Rural Electrification Act bill in 1936 during the Great Depression. Capitalist Franklin Delano Roosevelt knew that bringing electric power to rural areas was a socialist act of government that could bring farmers and small towns some wealth and all of agriculture into higher productivity. As president he realized that a blend of regulated capitalism and democratic socialism would create a smooth functioning balanced society. He reinforced his idea in January, 1941 that everyone should share in the wealth of a country.

Aware a world war about ideas might break out soon because of Hitler and Hirohito, he insisted to the world that all countries should provide four basic freedoms to citizens: (1) Freedom of speech and expression, (2) Freedom to worship God in his own way, (3) Freedom from want, and (4) Freedom from fear. Neither extreme capitalism or democratic socialism alone will provide any of the four freedoms. But a blend of both will provide all four. As a capitalist bartender working the bars at the capitalist Frederick Martin Hotel in Moorhead while working on my socialist Master’s Degree at socialistic Moorhead State, I preferred blended whiskey over straight because it had a smoother taste. I now prefer socialistic gin because that’s what socialistic liberals drink. And for governments, I prefer a blend of straight regulated capitalism and democratic socialism. I have nothing against profits. They have allowed me to do my thing for 87 years. Regulated capitalism produces the profits, incentives, and taxes that democratic socialists can use to ensure the “common good”--that all members of society will remain productive and able to participate in the society.

Quick Review Of My Life As A Working Stiff In A “Blended Country”
I worked my high school and college days in three men’s clothing departments at capitalistic Victor Clothing Co, capitalistic J.C. Penney, and capitalistic S & L Department Stores. I served as a waiter at tables and counter at the capitalistic FM Hotel, and a friend and I were often called upon by the manager to sing at birthday parties and other events. A friend and I delivered the capitalistic Sunday Minneapolis Tribune to small towns in the area. During Christmas vacations we both worked for the socialistic Fargo Post Office delivering mail on various northside routes.

During college I made some money pitching baseballs for socialistic small towns in the area and for the capitalistic Melroes (Bobcats) in Gwinner. I also worked in their capitalistic factory. Then I joined the Marines. I had my first dental appointment in Marine Corps boot camp and had a couple of cavities filled. It was my first exposure to socialized medicine. After three years of active duty protecting U.S. capitalists, particularly those raiding small Caribbean countries, I got my MA degree with the assistance of the socialistic GI Bill at MSUM and then taught English, Journalism, and Creative Writing at Fargo Central for eight years, and then served 28 more years in various socialistic administrative posts. I also coached the Fargo American Legion “B” baseball team for eight years back in the 1960s. I guess that would be a socialistic action, too.

Corky and I have visited by RV almost all the socialistic national parks in the country. We have used socialistic ferries to cross Lake Champlain, camp on several islands in Texas, and visit the San Juan Islands off Anacortes in Washington while sitting in the RV. While cruising Big Bend National Park along the Texas-Mexico border we have gone through a number of socialistic Border Patrol checkpoints.

Why Are Scandinavians And Europeans Always Judged The Most Happy People?
Because their models of government are a balanced blend of capitalism and various kinds of democratic socialism. These blends offer affordable universal health care in a variety of ways whether Swedish, English, French, or Danish. Public spending is sufficient to blunt poverty while still promoting economic mobility that is a hallmark of the blend. Yes, taxes are higher than in the U.S., but those taxes do not crush economic mobility. The blend helps to lessen income inequality while preserving effort and innovation to make an honest buck. Social welfare and prosperity for all is absolutely essential in these countries while very little anti-capitalist ideology exists. (Why did the Norwegians laugh at Trump when he said he would prefer immigrants from Norway rather than immigrants from shit-hole countries? Norwegians want no part of the country that has the greatest income inequality in the world.)

Germany is an excellent example of a good blend of capitalism and socialism. It has strong unions, an excellent universal health care program balanced by private insurance and government innovation and control, and a terrific safety net for all citizens. Every German corporation must have worker representatives on its corporate board. There seems to be an understanding on the boards that neither side is interested in short-term gains. They are there to balance the welfare of the corporation with the welfare of the workers.

Where Are The “For Sale” Signs?
Both the capitalistic Republican Trump and Burgum administrations have expressed so much hatred for any element of socialism, this “loser socialist teacher” as described by Trump in his El Paso rally wants to know, when is the state going to sell off the socialistic Bank of North Dakota, the socialistic North Dakota Mill and Elevator, and shut down the socialistic Milk Marketing Board? Capitalist President Donald Trump has proclaimed, “Socialism is a nightmare. We must commit to never becoming a socialist country.” Capitalist Republican Governor Doug Burgum shyly whispers, “Socialism has no place in North Dakota.” Capitalist Republican Senator Kevin Cramer rants at the sky, yelling: “POTUS IS RIGHT! (Always 100 percent!) WE MUST NEVER LET OUR COUNTRY BECOME A SOCIALIST NATION! THIS HAS TO STOP! WE CAN’T LET DEMOCRATS SUCCESSFULLY PULL NORTH DAKOTA TOWARD THIS HARMFUL LIBERAL AGENDA!”

Capitalist Republican ND Representative Kelly Armstrong tried to top Cramer with a special harangue: “Socialism flies in the face of ND values and individual liberty! We should be alarmed that Democrats in ND are continuing down the path of radicalism in embracing a doctrine responsible for pain and suffering of millions throughout history! This has to stop!” And where was silent capitalist Republican Senator John Hoeven in all this? Evidently he didn’t want to slide down this capitalist Republican banister because it had a lot of splinters in it. After all, he was a pretty good banker in his day. The capitalist Republican’s two main goals in life are to make money and cut taxes. Let’s not hold him or her back—too much. Everybody needs the money!

The “For Sale” sign for the mill should contain the following facts: “With eight milling units, the ND mill is the largest in the country, producing and shipping 49,500 cwt, (100 pounds) of milled products per day. In addition it ships over 14,000 cwt. of food grade bran and wheat middlings (cow feed) daily. It processes and mills over 100,000 bushels of wheat daily. The terminal elevator has a storage capacity of 4.3 million bushels.” How can any capitalist keep his greedy hands off this jewel? It should bring top price. What a windfall!

George Carlin: “The Reason They Call it The American Dream You Have To Be Asleep To Believe It”
Some capitalistic billionaires are beginning to realize they are killing the Golden Goose with their Gospel of Greed. Salesforce CEO Mark Benioff sees “an inequality train wreck” on the track. Billionaire Benioff looks down from his 60th floor office in capitalistic San Francisco and sees the homeless, human feces, urine, small super tents, drug paraphernalia, and blankets scattered on the streets. The super-rich have driven the middle-class and the poor from many coastal cities. The median price of a Frisco home is now $1.37 million. Too much for a teacher, a nurse, perhaps even a lawyer. Benioff knows the only solution for inequality is something like democratic socialism.

The following is a sign of what has to be done. The federal and state capitalistic Republican governments have failed to do anything about the toxic algae smothering Toledo, Ohio’s water in Lake Erie, so the socialistic city has gained the rights by court judgment to take over the treatment of the lake from the federal EPA! Zsa Zsa Gabor dropped this gem on her seven ex-husbands: “I’ve been married to a communist and a fascist, and neither would take out the garbage.” Evidently she had never married a democratic socialist. They always have to take out the garbage.