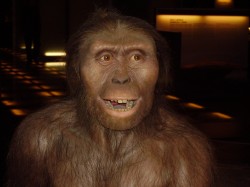 What kinds of freedom do you want with your religion?

Here we go again. The Telescope Media Group in St. Cloud, Minn. wants to get into the wedding photography business—but does not want to video, film, or photograph same-sex weddings.

In other words, they want to have the religious freedom to discriminate against their fellow human beings. They claim they are Bible-believing Christians who do not want to be forced “to produce a conception of marriage that directly contradicts their religious beliefs.”

Minnesota currently has a human rights act that would not allow them to refuse services to the LBGTQ community. They are challenging the constitutionality of the law.

Let’s examine why some religions still believe homosexuality is “intrinsically evil,” that Satan is forever working to increase the population of hell by recruiting gays 24-7. Then let us look at established facts about the human race.

Scientists have found the body of Lucy, one of our first humanoid ancestors, and determined that she fell out of a tree in Africa about 3.2 million years ago and probably died of broken bones. (We just discovered that five of Lucy’s ancestors left their footsteps in volcanic ash 3.6 million years ago!)

Other scientists have discovered that Lucy had many gay companions. About a decade ago Norwegian scientists, who love to say “oofdah” to other people, thought it would be fun to find a species on earth that did not have LGBTQ members.

By the way, homo same-sex geese are better than hetero different-sex geese at raising ducklings.

Norwegian researchers have examined 1,500 species and have given up trying to find one that was strictly heterosexual.

We share over 99% of our DNA with chimpanzees, our closest relatives. All chimps are bisexual and are sexually active with one another. Sex is used by chimps to reduce violence among all of them, and is the most typical means of resolving conflicts among many species.

How could human animal herders stand for all that same-sex hanky-panky?

If you believe in Genesis and the story of Adam and Eve, that’s fine with me, but don’t try to tell me all their descendants are heterosexual except for those unfortunates who have been picked off by that miscreant Lucifer. There is no scientific doubt that we have evolved to our present sexual mores over millions of years.

Even the best-known mythical gods of the Greeks and Romans, Zeus, Apollo, and Achilles, were “known” to be homosexuals by the common man. Back then religious Jews dreamed up the living standards of Leviticus under Old Testament laws. According to them some things were really abominable: same-sex sex, the flesh of rabbits, the tasty morsels of shellfish, pork chops, the meat of ox, sheep, and goat, mixed seeds, and clothing made of two different materials.

Bestiality was pretty well-covered in the Old Testament and is still frowned upon. Leviticus had some more practical rules for Jewish populations: (1) Don’t have sex with a woman during her period, (2) Don’t have sex with your neighbor’s wife (whether you are male or female!).

Republican delegate Rachel Hoff, the only openly gay member of the Republican National Committee in 2016, asked her fellow members in July to “widen” their views of same-sex marriage by passing an amendment to “encourage and welcome a thoughtful conversation among Republicans about the meaning of marriage.” Her plea fell on deaf ears hardened by years of warnings about “intrinsically evil” gays and “disgusting” lesbians.

Her amendment received 30 votes out of 112. Instead, the platform committee approved language approving “conversion therapy” for LGBTQ minors, although such therapy is considered to be extremely harmful by the American Psychological Association.

What has happened between straight and gay in the last 60 years?

I was 24, married with two children back in 1956, and living in the South at Camp Lejeune Marine Base, North Carolina, when the movie “Giant” starring Elizabeth Taylor, Rock Hudson, James Dean, and Sal Mineo was a big hit.

No one seemed to know that the most beautiful, sexy woman in the United States was working with three handsome, winsome gay guys. If it had been common knowledge that the three men were gay, the movie would never have been made.

Hudson later died of AIDS, Dean was killed in an auto crash while the movie was being filmed, and Mineo, actually bisexual, was stabbed to death in a robbery at the age of 37.

It has only taken about three decades to go through the most important cultural “metamorphosis” in the history of the human being, affecting hundreds of millions of gay people across the world. We still have a long way to go in recognizing and accepting gender and sexual identities—but we are currently up to 60 different gender options.

The idea that God gives all humans a very precise dose of testosterone, estrogen, and hormones has been totally discredited. We now range from cisgenders, binaries, pansexuals, nonbinaries, transgenders, bisexuals, nonsexuals, to non-genders, and another 55 identities at last count.

In 2016 Erin O’Flaherty, winner of the title Miss Missouri in a fundamentalist state, made gender history by becoming the first openly gay Miss America contestant in history.

Huge corporations such as Netflix, Apple (CEO Tim Cook is gay), McDonald’s, Salesforce, and WalMart now spend lots of money on parade floats in order to participate in gay-pride activities around the country in the spring.

She eventually lost her talkshow for some time because some advertisers pulled their commercials. J.C. Penny was one of them, but it eventually returned and supported her show. She was attacked by religious fundamentalists, particularly Jerry Falwell, Sr, who called her Ellen DeGenerate.

This prompted a well-known riposte by liberal gadfly Christopher Hitchens, who charged that Falwell was “so full of crap that if he had an enema you’d be able to bury him in a matchbox.”

Ellen currently earns about $75 million a year and has 63 million Twitter followers, about 20% of the U.S. population.

Is this book heresy or revelation? You decide

Even Bill O’Reilly of Fox News said Episcopal Bishop John Shelby Spong’s book, “The Sins of Scripture: Exposing the Bible’s Texts of Hate to Reveal the God We Love, “would make people think, which is just what Bishop Spong means to achieve.”

This paragraph says it all: “Overwhelming scientific and medical knowledge exists today pointing to an inescapable conclusion. Sexual orientation is not a moral choice. It is something to which people awaken. It is therefore not morally culpable. The texts in Leviticus 18 and 20 are simply wrong. They are morally incompetent because they are based on ignorance. They should be viewed...as stages in human development that we have outgrown”

Spong has written over 20 books examining the Christian religion and the Bible. His main point: “The first line of defense used by those who want to condemn homosexuality appears now to be the Bible. It is evident in Western society today that the major negativity against gay and lesbian people emanates from conservative Christian churches, both Catholic and Protestant….Because of the advance in scientific learning, the attitudes, prejudices, and ignorances of the past tend to die out as new ideas challenge old practices.

“Some say the words in a particular book, the Bible, cannot be wrong because God is their author. So the limitations and the uninformed ignorance of ancient biblical authors have been quoted to perpetuate, throughout the history...the prejudices of antiquity”

Compared to its civilian counterparts, the military accepted gays at warp speed

One Prussian general who was a principal aide to George Washington in our Revolutionary War was gay—and he brought his partner with him—but that’s another story.

In my seven years in the Marine Corps Reserve and on active duty I had many gay Marines in my various assignments. We didn’t ask and we didn’t tell.

President Bill Clinton got Congress to accept the “Don’t Ask, Don’t Tell” policy in 1993. In 2007 the Chairman of the Joint Chiefs, General Peter Pace, complained that gay soldiers and sailors would destroy “unit cohesiveness.”

But by 2011 the “Don’t Ask, Don’t Tell” policy was dropped and gays were accepted without a problem. As one Army officer put it: “The rest of us didn’t care. We all knew gays were serving with distinction.” And the decision did not destroy unit cohesion or lower morale.

Just six months ago an openly gay man became Secretary of the United States Army. Eric Fanning had a long confirmation hearing but not one question was raised about his sexual orientation. The final step of recognizing gays in the military will be the acceptance of transgenders in all branches of the service.

The National Geographic magazine is publishing a special issue in January 2017 called the “Gender Revolution” which will examine the “cultural, biological, and personal” aspects of gender identity around the world. On the cover is a nine-year-old transgender who says: “The best thing about being a girl is, now I don’t have to pretend to be a boy.” It should be an informative read.

It’s been a long battle since Lucy and her gay relatives stalked the plains of Africa---and Ellen is no longer called a degenerate.