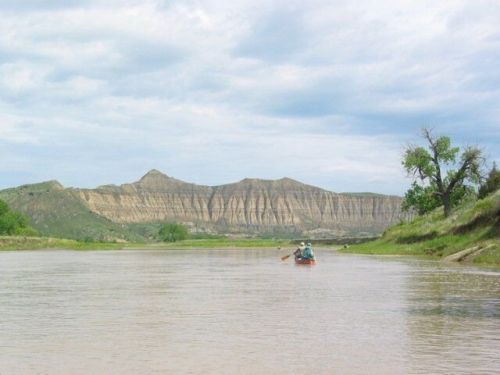 It seems like the threats to North Dakota’s Badlands never cease. Let’s go back and revisit Wylie Bice. He’s the rogue, rich, rancher up in Dunn County, on the eastern edge of the Badlands, who’s built himself a private bridge on public land, without permission, over the Little Missouri State Scenic River. Now it appears he is going to get away with nothing more than a slap on the hands and a little dip into his very big pocketbook.

I’ve written about him before. After making a fortune in the oilfield trucking business, he bought a neighbor’s ranch across the river from his and then spent a lot of money—maybe as much as a couple million dollars—on a fancy bridge to get back and forth. The only problem is, he built it on land owned by the Bureau of Land Management (a federal agency charged with managing some of our federal lands), figuring it was easier to say he was sorry than it was to ask for permission. Boy, was he right.

When the BLM found out about the bridge, an industrial water depot, a road and an alfalfa field, a few years after they had been built, they “sprang into action.” The BLM charged him with trespassing and began a process to determine what to do about it. The process was to conduct a formal Environmental Assessment (EA) to see what damage he had done and how it might be corrected.    The first draft of the EA is done and it’s out for public review. You can go to the BLM website to look at it if you want to (I think this address will get you there: go.usa.gov/xQF89).  It outlines five possible scenarios ranging from tearing down the bridge to swapping land with Mr. Bice so the bridge would no longer be on public land. At the very outset of the plan, the BLM said it had “eliminated (the land swap) from further examination,” and then in the next breath said, “the BLM remains open to a potential land exchange for this area” sometime down the road.

Yeah, that’s weird. And suspicious. But I found something weirder, which kind of explains that. I sent an e-mail to the BLM asking them who wrote the EA, and who was paying for it. They wrote back that the way it works is, Mr. Bice actually hires an engineering firm to do the EA, they write it (and, presumably, run it by their client for approval), send it to the BLM, which edits it and publishes it. Huh. A bit like the fox guarding the hen house, it seems to me.

The Draft EA prepared by the engineering company and approved by the BLM says the Preferred Alternative—the recommended outcome of all this—is “to grant a 30-year right-of-way for the bridge and access road” and “require the reclamation of an unauthorized settling pond and portions of two alfalfa fields developed on public land.”  In other words, they propose to let Mr. Bice keep his bridge, tear out his water depot, seed his alfalfa field back to native grasses, and then slap a fine on him for doing all that. He probably spent a couple million dollars on that bridge, so they are not going to make him tear it down.

The BLM has accepted the engineering firm’s recommendation and has sent out a press release saying the Draft EA is done and there’s now a comment period open until April 24, for those of us a little concerned about this, to let the BLM know how we feel about their recommendation. I think I’ll just send them this article as my comment. I’m probably about as stirred up about this as I am going to get. Here’s why. To repeat and summarize: The bridge stays, the road stays, and the wealthy Mr. Bice gets fined for not getting the right-of-way permit BEFORE he built the road and the bridge.

By the way, I asked the BLM how much the fine was going to be. They said first he has to pay all the reclamation costs, as well as the government’s costs for investigating all this. Then he has to pay rent on the land he’s been using the last four or five years. Because he is obviously guilty of “knowing and willful trespass,” his penalty will be two times the rent and road use fees.

The BLM said they’d calculate the fine when the Draft EA becomes final, and let me know how much the total is. But they also said if Mr. Bice is not cooperative, he could be fined up to $100,000 and go to jail for a year. Wouldn’t that be something! But the BLM tells me Mr. Bice is being very, very cooperative, so those drastic measures probably won’t be taken. No surprise there. The dude has deep pockets and will pay any fine necessary for him to get to keep his bridge.

In fact, he’s been so cooperative that when I asked the BLM if there’s been any timetable established for all this to get done, here’s their response:   “The responsible party (Mr. Bice) is prepared and ready to move forward with immediate reclamation of the ponds and fields, but the BLM has instructed that the reclamation may not occur until the NEPA has been completed and an acceptable Reclamation Plan has been approved by the BLM. The responsible party has hired a contractor to finalize the Reclamation Plan, and the BLM intends to have the plan reviewed and approved shortly following the outcome of the selected alternative in the NEPA Decision.”   So the ball is in the BLM’s court.  Here’s the problem I have with all this. It sets a precedent. How many more ranchers would like their own bridge over the Little Missouri State Scenic River? “Hey, Old Wylie got away with it—we can too.”

See, Old Wylie’s got a water permit to take water for fracking out of the Little Missouri, and he has his own private water depot on his own side of the river, and he can sell a lot of water to a lot of frackers if they have a nice, convenient way to get those water trucks back and forth across the river.

In fact, he can probably sell enough water to pay for that bridge. And don’t be surprised if someday, a few years from now, a land swap takes place and Mr. Bice trades a hundred or so acres of his ranchland somewhere out in the boonies of Dunn County for the hundred acres or so of prime riverfront real estate, the bridge sits on. And puts his water depot back in. And then he can REALLY sell some water.

And there are a bunch more ranchers out there who also have water permits and water depots, ever since the Legislature and Gov. Doug Burgum opened the river up to industrial development in 2017. We complained about that back then and asked Gov. Burgum not to do that. Probably wouldn’t take too many truckloads of fracking water for them to pay for bridges across the river at their places too. Pretty soon the Little Missouri State Scenic River valley becomes an industrial corridor. That’s the danger we warned the Governor about when he established the policy of using Little Missouri State Scenic River water for fracking, to accommodate the oil industry.    There are no firm dates set for any further action by the BLM, except the April 24 deadline for submitting comments. My guess is they’ll move pretty fast (for government) so Mr. Bice can get the water pit out of there this summer and get native grass seeded in place of the alfalfa.   Feel free to let the BLM know how you feel about this. The EA is actually pretty easy reading. And at the end, there’s a comment form. Go ahead, use it.