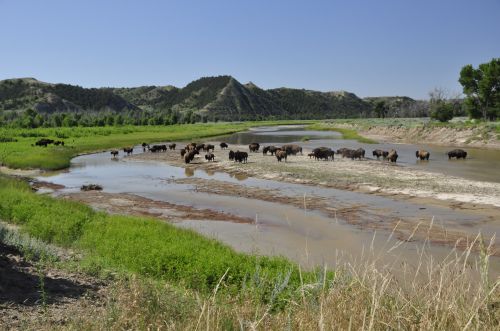 I have written before about this stupid, harebrained, boneheaded, senseless, vacuous, selfish, destructive, egomaniacal, (insert your own adjective here), idea of the Billings County Commissioners to put a bridge over the Little Missouri State Scenic River a dozen or so miles north of Medora. I’m going to keep writing about it until it goes away.

Six months ago, it looked like the bridge was just a few days, or weeks, and a few million dollars, away from being built. It’s a bridge that the Billings County Commission Chairman Jim Arthaud once said (and later wished he hadn’t, because some of us won’t let him forget) was going to carry a thousand trucks a day, doing the business of the oil industry, from one side of North Dakota’s BadLands to the other, leaving giant clouds of dust in the air, to settle, in the still of each evening, on the fragile ecosystem we call the Little Missouri National Grasslands.

Now I’m not so sure. Now, there may be some hope it won’t happen. I’m not holding my breath, but there’s a tenacious BadLands ranch family, on whose land the bridge is proposed to be built, that is saying “Whoa!”

The family of the late U.S. Congressman Don Short, a family firmly planted on what’s been described as “the best bottom in the Little Missouri valley” since 1902, nearly 120 years now, told Billings County and the U.S. Government in December where they could put their bridge. Well, not really. They just told them to put it somewhere else. Or don’t put it anywhere.

Just more than a month ago, on December 27, the Short family filed a lawsuit in federal court in Bismarck seeking to overturn a decision reached through completion of an Environmental Impact Statement, and to stop the bridge from being built. The fate of the bridge, and indeed, the fate of the entire Little Missouri State Scenic River valley, is now in the hands of a federal judge in Bismarck. There’s no way to know how the judge will look at this, but it’s possible someday this could be in front of the United States Supreme Court, depending on the tenacity of a stubborn Bad Lands ranch family and a stupid, harebrained, boneheaded, senseless, vacuous, selfish, destructive, egomaniacal, (insert your own adjective here), three-member county commission.

The scion of the Short family today is Dave Short, grandson of the late Congressman who, along with his widowed mother, Sandy Short, has rallied his family alongside the river that’s been home to four generations of Shorts for more than a century. Dave recently told a newspaper reporter “We don’t want a bridge across the Little Missouri that’s sole purpose is just for one or two owners of large oil trucking companies to move 1,000 trucks back and forth across.”

One of the biggest beneficiaries of the bridge could be one of the biggest oilfield trucking companies in North Dakota, a company once owned by Commission Chairman Arthaud until he sold it a few years ago—he owned it when he first proposed the bridge more than a dozen years ago, but it’s taken a long time to get this close to being built.

In their lawsuit, the Short family says they were never formally consulted about the project. Indeed, members of the family have told me that the Billings County Commissioners, the driving force behind the bridge, have never sat down and visited with the Short family about the bridge. In a sparsely populated county, where everyone pretty much knows everyone else, that’s just not a very neighborly thing to do.

The Short family’s legal effort should have come as no surprise to the Billings County Commissioners. Dave Short’s dad, the late Con Short, who passed away in 2016, served notice in 2012 that the Short family would oppose the bridge. At a public hearing held in Medora in June of 2012, as part of the first effort at writing an EIS, Con challenged Commissioner Arthaud on the project saying “We will get this project stopped. We do not need a bridge across Little Missouri except for your ego.”

Then, in a voice filled with emotion, showing his love of the place he called home all his life, he said, “Billings County is the prettiest place in North Dakota. Why ruin it with more roads and bridges?”

Now, eight years later, the Short family has not forgotten what Con Short said at that meeting—“We will get that project stopped.” So instead of playing defense by waiting for the county to begin condemnation proceedings through the eminent domain process and then fighting that in court, they’ve taken the offense.

In their lawsuit, the Short family says that the Environmental Impact Statement prepared by the Federal Highway Administration comes up short, mainly that it fails to consider a number of impacts the bridge will cause, including:

In addition, the lawsuit says the chosen route for the bridge “cuts directly through the heart of the Short Ranch and will cause irreparable harm to the character, history, and function of this property. This damage was not meaningfully considered in the Final Environmental Impact Statement.”

The suit goes on: “The Short Ranch is characterized by land that is rugged, unblemished, majestic, and perhaps most importantly, isolated. The ranch itself is of substantial historic value. It has been in continuous operation since 1902 and is approximately four miles upriver from the Elkhorn Ranch. The Little Missouri River Crossing, which would drop a paved bridge on this isolated stretch of private land, would significantly change the character and delicate landscape of the Short Ranch.”

It’s a gamble for the Short family. These kinds of lawsuits get expensive, especially if they drag on through the appeals process. But the Shorts understand that this is about more than just their ranch. This is about the future of the BadLands and the Little Missouri State Scenic River. It’s about stopping a thousand trucks a day from roaring through the most important, and most scenic, river valley in our state.

There’ll be a big cheering section on the sidelines as this case makes its way through the court system. And that crusty old rancher Con Short will be smiling nervously, and leading that cheering section. Because his family did not forget that challenge he issued back in 2012: “We will get this project stopped.”