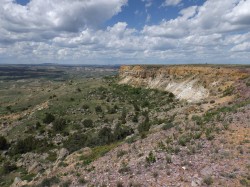 There was a big dust-up about 5 years ago over the North Dakota State Land Board’s decision to offer, for lease, the right to drill for oil on the west side of one of southwest North Dakota’s major landmarks, Bullion Butte. The butte and some of the acreage around it are mostly owned by the U.S. Forest Service, and the area has been off limits to development since about 1977, and closed to even access by vehicles since 2001, when the Forest Service set it aside as one of five “roadless areas” of the Bad Lands, areas suitable for designation as official Wilderness under the Federal Wilderness Act of 1964.

Bullion Butte is one of North Dakota’s true treasures. It is absolutely my single favorite place in North Dakota. I have hiked to the top of it a few dozen times. It’s harder work each year for these aging legs of mine. I haven’t missed many years since I first climbed it in 1976.

Each time I do it now, I stand at the precipice on the northeast corner of the massive butte, looking down at the Little Missouri River, where I parked my car a couple of hours earlier, and shout at the top of my lungs, much to the amusement of my climbing mates, whoever they happen to be, “I am now the oldest person to ever climb Bullion Butte!” I’ve never climbed it with anyone older than me, so there’s no one to challenge me, and my most frequent climbing companion, Mike Jacobs, who’s two months younger than me, says he just can’t wait until I die so he can go up there one last time and stake the claim for himself. I hope it’s a long wait.

It’s not the highest butte in North Dakota—White Butte, about 20 miles south of Bullion, claims that honor, by about 150 feet—but it’s in the top 5, and the land area on top probably makes it the largest. It’s easily 500 acres of flat prairie grasslands, and when you’re standing in the middle of it, away from the edges, you get the illusion you’re just out walking on the North Dakota prairie. Which you are, except the rest of the prairie is about a thousand feet lower.

Mike (or my wife Lillian, or whoever else is with me) and I usually circumnavigate it, which takes a couple of hours, overlooking southwest North Dakota in every direction—you can see Black Butte to the southeast, Pretty Butte southwest, Sentinel Butte northwest, and the Rainy Buttes to the east, all great in their own right, and all in that “top ten” category of highest buttes in the state. I’m pretty sure you can also see both South Dakota and Montana from various points, but claiming Canada would be a stretch.

We almost always stop on the northwest face for a short rest and a sandwich or an orange before making the trek back down to the river, which takes an hour or more, depending on how often we dawdle along the way. Usually a cold beer awaits in the cooler, and on some hot summer days, we’ve been known to just plop right down in the shallow Little Missouri River and savor that.

Anyway, back to matters at hand. Bullion Butte and about 9,000 acres surrounding it, are part of the Prairie Legacy Wilderness proposal, a plan to designate those last 60,000 acres of roadless areas in the Bad Lands as official Wilderness, preserving it as it is, forever. Not much has changed up there, or on the rest of the roadless acres—but the other 95 percent of the million acres of National Grasslands (we know them better as our Bad Lands) are open for oil and gas development, and that’s happening.

Those five small areas, those 60,000 acres, that I think were finally and officially set aside by President Bill Clinton in a plan written in the final days of his administration, remain roadless, and “suitable for wilderness” today. No oil development.

One of the little problems with the way that roadless area plan was written, though, is that there are some “inholdings” inside some of these areas, land owned by someone else, surrounded by Forest Service land, and one of these inholdings is a section of land on Bullion Butte, owned by the state of North Dakota’s Trust Lands Department and managed by the State Land Board. North Dakota’s trust lands—about 3 million acres scattered across the state—were given to us at statehood to provide income to support our state’s public education system. Most of us know them as “school sections.” One of those school sections, all 640 acres, just happens to be part of Bullion Butte.

Probably in 1889, at statehood, nobody gave much thought to the idea there might be billions of dollars worth of oil under them, and that someday, somebody might figure out a way to get it out of the ground. And make a whole bunch of money for our state’s schools. But somewhere along the line, some foresighted state employee or legislator devised a way to make that happen. It happens by the state leasing the rights to the minerals under those school sections to somebody with an oil drilling rig, letting that somebody bring the oil up, sell it, and give the state a percentage of the money. I think the state gets the royalties from one of every six barrels, but I’m not sure—in any case it’s been a lot of money during the Bakken Boom.

The way it works is, somebody with an oil drilling rig goes through the records in county courthouses and when they spot a section of land that might just have oil under it, they “nominate” it for lease at the Trust Land Department’s next quarterly lease sale. The Trust Lands Department puts out a list a few months before the sale so that other people with drilling rigs can take a look at it and decide if they want to bid on it at an auction.

That’s what happened in early 2012. A leasing company on hire by oil giant Chesapeake Energy Corporation nominated Section 24 in Township 137, Range 103, in Billings County, North Dakota, for lease at the next auction. That’s the school section on Bullion Butte, in the middle of the Forest Service’s roadless area, and if Chesapeake had leased it and decided to drill an oil well there, it would have pretty much eliminated the scenic, wildlife and cultural value of Bullion Butte, which has been protected from development since statehood.

Luckily, North Dakota has residents who care about things like this, and one of them, Mike McEnroe, who’s a member of a number of conservation organizations, including the Badlands Conservation Alliance (BCA), went looking through the list of sections nominated for lease one day back in 2012 and spotted the Bullion Butte section. McEnroe and Jan Swenson, Executive Director of BCA, went and talked to the Trust Lands people, and also to the news media, and the end result was, there was so much bad publicity about this happening that Chesapeake ended up withdrawing its nomination and went slinking off into the Bad Lands with its tail between its legs. A victory for BCA. And Bullion Butte. And the Bad Lands.

Well, fast forward five years. I was at a meeting with McEnroe and Swenson and a few other BCA members a couple weeks ago and Jan said “Guess what, guys. There’s a Trust Lands mineral lease auction at the end of the month, and Section 24 is back on the list—somebody nominated it.”

A short discussion ensued, and I said that since I had written a few stories about it for my blog 5 years ago, maybe I’d do another one now. So I went home and called my (by now through sheer continuous contact about stuff at his office) friend Drew Combs, who’s head of the Minerals Management Division of the Trust Lands Department and said “Drew, I was talking with some members of the Badlands Conservation Alliance yesterday and they mentioned that school section on the side of Bullion Butte is up for lease again.”

I could tell by the long pause on the other end of the line (do phones even have “lines” any more?) that this one had slipped by him. We had a brief conversation about what had happened five years ago and he said “I’ll get back to you.”

That was the morning of January 5. By the end of the day, the president of the company that had nominated the parcel for lease told Drew Combs he’d like to withdraw the nomination. I’m pretty sure Drew told him about the bad publicity Chesapeake had gotten five years ago, and this guy wanted none of that.

Hats off to a great state employee, Drew Combs. And to a great conservation organization, the Badlands Conservation Alliance. Anyone who’s ever climbed Bullion Butte, or just admired it from a distance, or from a canoe as they floated by, knows how important these two victories are.

Check out BCA’s website -- www.badlandsconservationalliance.org -- it has a place where you can become a member.