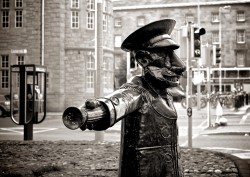 John Ruskin neglected to mention the policeman’s trade in the same breath as the soldier’s trade he honored, and that is a shame. England in the 19th Century didn’t need as many cops (“Bobbies,” as they are called after their sponsor, Prime Minister Sir Robert Peel) as the U.S. Yet a policeman’s honor is similar to that of the soldier’s and that honor has often been compromised by politicians who place his or her profession at the service of malefactors of great wealth and their propertied pretensions, rather than the average citizens they are sworn “to serve and protect.”

England needs rather more cops nowadays, and they are necessarily armed. Even though the English don’t support as many armed citizens as the wild and wooly place that Americans, and our 2nd Amendment freedoms, call home, proliferation of guns by gun corporations and their cowardly cheerleaders who head the National Rifle Association(NRA), has dramatically encouraged itchy trigger fingers around the world.

I am told that NRA President Wayne LaPierre and his crowd don’t allow guns at their meetings. Yet they tout the bearing of arms at venues around the U.S., including schools and churches. This signifies the intellectual rot that MSNBC conservative commentator Steve Schmidt sees at the head of the Republican Party, but also the moral rot that characterizes the GOP’s worship of corporations without a conscience.

While citizens are sometimes targets of the obscene weaponry the NRA loves so much, either from nut jobs who get their hands on automatic weapons, or when cops f**k up, cops are targets on a daily basis. That is their burden, but also the source of the honor that so many bear with resignation, and occasional good humor.

Policemen and policewomen know very well that the color of prejudice can apply to a person’s uniform as well as their skin. This can sometimes lead to sympathy with those in the medical and teaching professions who also find themselves abused by an insensitive public. As a Professor at a teacher training University [Northeastern Illinois] from 1967-2000, it was my privilege to know a number of Chicago cops, some of whom were my most insightful students. One of them [I’ll call him “Dan”], once said to me over some liquid refreshment: “Charlie, the only people I cut any slack for, are teachers and nurses; because you take as much shit as we do.”

Since the only police friends I knew at the time were in singing groups, and did not discuss their trade with me, anymore than I did mine with them, I asked “Dan” which TV cop show best represented the trials of his profession. I thought that it might be a crime drama like NYPD [1967-1969] or NYPD Blue [1993-2005]. Dan’s response was: “No way. It’s “Barney Miller,” a situation comedy from 1975-1982.

Imagine that! Policemen and policewomen as no different than the rest of us; except, of course, when they are engaged in enforcing laws they had little to do with shaping. It is this fact of professional life that unites the dilemmas of any law enforcement officers in a big city with those who serve in rural settings like Morton County, North Dakota.

The “standoff at Standing Rock,” as brought to us by TV, Facebook, Twitter and newspapers, would have us believe that we have a problem of some sort.

Of course we have trouble here in “Missouri River City,” but, as General Michael Hayden has asked, what is the story?

Republican Governor Jack Dalrymple, and fellow cowards on the North Dakota Industrial Commission, Republican Attorney General Wayne Stenehjem, and Republican Agriculture Commissioner Doug Goehring, would have us believe it is a “State of Emergency,” whatever the hell that is. But Governor Dalrymple dares not add the part of the story that relates to how he never met a fat cat foreign oil corporation he didn’t want to cater to, regardless of what damage they might wreak on homelands of North Dakota citizens, regardless of their ethnicity.

What about the part of the story that points out that there are some two dozen pipelines already pumping away underneath the Missouri River, all of them subject to leakage, as an official of the U.S. Army Corps of Engineers confessed to HPR’s C.S. Hagen?

What about the nature of the petroleum that would be pumped through the Dakota Access Pipeline, wherever it might be routed? Will it be 100% Bakken Sweet Crude, which is, along with Natural Gas, the fossil fuel of choice for those who believe we can tolerate any burning of fossil fuels as the Greenland Ice Cap begins to melt from Greenhouse gasses? Or will sweet crude be mixed with tar sands, as 17% of what makes its way south and east already does, making a bad climate situation worse?

Also, when corporations abuse the power of “eminent domain” for their profit, why are they not held to account by State and Federal regulators? Why are these burning issues left to be decided by our courts, which must proceed deliberately, while law enforcement officers must deal with folks who know in their hearts that they have been betrayed by the legislative and executive branches in this country?

The answers my friends, are not blowin’ in the wind, but are found in Biblical passages which deal with “golden calf” worship and other idolatries ignoring the spiritual, as well as in John Ruskin’s lengthy discussion of what constitutes honor, and what does not.

The Republican Party of 2016, and their “Whiner-in-Chief,” Presidential nominee Donald Trump, are in trouble nationwide, but may not suffer as much as they deserve to, at least not in North Dakota.

Sheriff Kirchmeier has erred tactically with his “proactive” approach to demonstrators in a remote section of the State, but his Republican bosses at the State Capitol have been strategically stupid. They waste millions of taxpayer dollars on militarized law enforcement over an issue that drags on in the courts, and may not be settled until more graves are desecrated and serious human casualties occur. The “annoying” habit of North Dakotans on both sides, in preferring to be “nice” under the worst of circumstances, may not prevail in the wake of Governor Dalrymple’s studied neglect of his duty to serve the public good rather than private greed.

Democrats had better pay attention as well. They are being turned to, because, in a two-party system, there is little realistic choice for serious citizens. In fact, Democrats in Congress and State Legislatures are pressured by the same irresponsible corporations that totally dominate the Republicans. This time Democrats must not knuckle under, if they should command the Presidency and a working majority in both federal chambers.

If Democrats fail to regulate where regulation is necessary; if they fail to create real jobs in the “green energy sectors” they are promising; if they fail to produce infrastructure jobs for those in places like West Virginia, Ohio and elsewhere, who are displaced by high technology, they will deserve the same condemnation at the polls now being meted out to Republicans.

Meanwhile, cops continue to deal with the most discontented among us. I met my friend “Dan” on another occasion at the university swimming pool, where we both working out. I noticed that he was wearing a cast on his arm. He said, “yeah, I got a little careless while chasing down a perp [perpetrator of a crime].”

Chasing, not shooting. All in a day’s work for a Chicago cop back then. And today as well, I dare say, for most of them. I related Dan’s story to some local cynics here in Bismarck, while we watched some of the latest horrors of police abuse in St. Louis, Chicago and Baltimore, at a local restaurant. They replied; “oh sure, that’s Old School.”

I prefer to call it integrity. Honor.