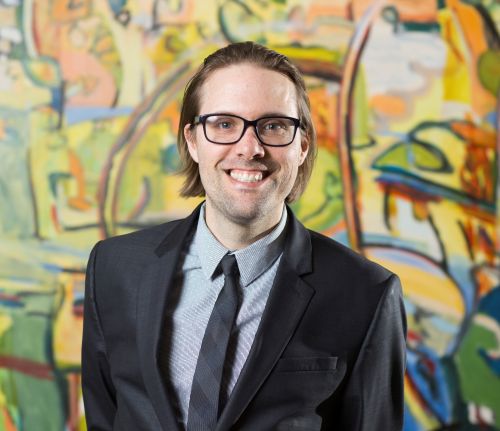 When I started working at Plains Art Museum in 2000, I worked at the Museum’s visitor services desk – greeting visitors, answering phones, and selling items in the store. I was just getting started, so I didn’t have a lot of perspective, but one thing was certain – this museum did not fit my narrow understanding of what an art museum is. Isn’t an art museum just a place where old things go to die? I had never seen an art museum that did so much – classes, programs, performances, public art projects, and exhibitions with actual living artists.

Now that I have been the Director & CEO of the Plains for over 3 years – and have a few more years of wisdom behind me – it is striking just how different Fargo is from so many other places. When I tell local people that I lead the Plains, a frequent response is, “Oh, you must be an artist, then.” To this day, this response is still shocking to me. It is indeed true – I am an artist, but that is not what is shocking about it. Amongst my national museum colleagues, there are only a small handful of us who are artists. Most of the rest are academics or historians. To us in Fargo, an art museum is an artist-place where you not only do the normal museum things, but you can also throw a pot or visit with a working artist – in other cities…. well, that’s not so commonplace.

When I tell people from other places that I am from Fargo, they look at me like I am an anthropological subject. What is it like there? Sounds frigid and desolate… I heard it’s a pretty hip place, but I can’t stop thinking about wood-chippers for some reason. It doesn’t help things that Fargo is actually a pretty weird place, and we’re better for it. At a recent conference, I recall telling a group of fellow museum directors from around the country that our museum hosts potlucks. I explained how we work with community organizers to host International Potluck events. The looks on their faces were priceless. “You do… potlucks?!” Yes, potlucks. The kind where you bring food to share – you know, like in Midwest church basements but in an art museum instead. Why not?

About a year ago, Plains Art Museum exhibited a large painting by Minnesota-based Native American artist Jim Denomie. It was a large painting depicting a cast of characters in a composition based on Leonardo da Vinci’s “The Last Supper.” The central figure was a priest with his pants at his ankles – visible from underneath the table. It was apparent to me that this figure was a response to the Catholic Church’s ongoing rape and abuse scandals – something that is difficult for people to see and talk about. In the surrounding scene, there were depictions of abuse of Native American peoples, symbols of racism, and other provocative content. Stylistically, it was somewhat like a cartoon, yet very confidently and effectively painted. I thought to myself, “This is it… I had a nice run, but there’s going to be a coup when people see this.”

After I caught myself in self-doubt, I recalled my experience as a TEDxFargo speaker. TEDxFargo is one of the best TEDx events in the country – the kind of high quality and ideas-driven event that other cities are inspired by. The year I spoke, there were several speakers whose content was sociopolitical and, by today’s often misguided standards, downright Partisan. I remembered Greg Tehven, the lead organizer of TEDxFargo, saying to me that he was nervous of a backlash that year. In the end, there was no coup, no nasty letters-to-the-editor, no threatening messages – just openness to learning. He said to me, “I need to start trusting Fargo.” He was right, and this resonated with me. The growth from Fargo being a sort-of-arty-big-town, to one realizing its future as a quirky, open and diverse arts and cultural center is within sight.