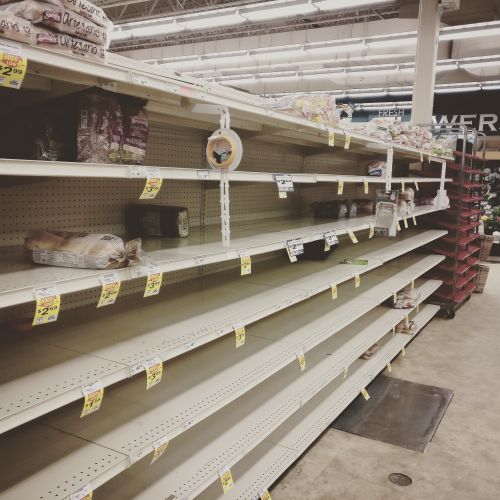 There is nothing quite like a major crisis to put ideologies and government into stark relief. Enter the Trump administration and our current pandemic. I doubt there has been a time with more bumbling incompetence than what we are currently witnessing. Is this a comedy? A tragedy? Is there a difference? Is this Twilight Zone episode ever going to end?

We’ve known about the Coronavirus for more than two and a half months, and we’ve known for two months that if it got out of hand, it could be a disaster. We’ve known for over a month that it was getting beyond control and was not stoppable. In addition, we’ve known for the length of the modern medical era what steps will vastly reduce the spread of disease and prevent a disaster.

And our government did nothing. Well, not nothing. They bragged incessantly about the economy and stock market.

Throughout this winter, the administration has acted not as the protectors of our well being, or even that they cared for actual people at all. Rather they have become a PR agency for the stock market and big business. “Everything is fine.” “Carry on buying things.” “Best economy ever!” And so we enter what may be the pandemic of a lifetime without having done the most basic of preparations except urging Wall Street into ever more unrealistic heights.

But what do we expect from a leader who has always prioritized using the resources of the Federal Government to inflate the success of the markets. In the past three years, Trump has used every measure possible, even emergency measures without the emergency just to crank it a little higher… As if high stock value is the true measure of any presidency or that he planned to sell us all off at a profit.

And now we’re in an actual emergency, both medical and economic, and we have so few tools left available and unbroken. Our agencies have been so gutted that they now wallow in ineffectiveness and their staff kept at each others throats as if Trump is desperately afraid of underlings with real ability.

As to the pandemic, we don’t have nearly enough testing kits to find out who has the virus and who does not. It is inconceivable that we are the world’s leading superpower who have had months to prepare, yet we have nowhere near enough testing kits ready. Other nations were producing kits by the tens of thousands a month ago and the United States government not only waits for the virus to arrive on our doorstep before ramping up production, we actually wait for it to become a full blown crisis.

Did we believe in American Exceptionalism to the point that we didn’t think we would be susceptible?

Testing is the first line of defense. It’s the intelligence service of the medical community. If we can’t test, we have no clue who is infected. We have no clue where the virus is, and we can’t isolate the sick to stop the further spread. Testing people and quarantining the positive cases is the least obtrusive and most effective way to combat any epidemic. You do this before you shut down schools, before large gatherings are banned. You do this to lessen the severity of the outbreak.

And now we are plunging past the point where that would have been most effective into a no man’s land of fear and uncertainty, while our “Dear Leader” takes no responsibility for his administration’s failings.

What has the administration done? Minimized facts, equivocate expert opinion and outright lie about the virus and its dangers. Even worse, the President is acting like weak men have always acted throughout history when their own weakness has been exposed. He is performing almost random actions and arbitrary measures not to aid in the crisis, rather to prove that he is in charge. Thus arbitrary travel bans and random economic incentives like that senseless payroll tax holiday.

Donald Trump wants you to know that he is in charge of everything… but not responsible… for anything.

One may think that we should rely on our own state more because they may have a better handle on it, so I listened to Governor Burgum's response to the first case of COVID-19 in North Dakota. Though he could read off of his notes and speak in complete sentences, I was left less than confident.

From the Bismarck Tribune:

"The governor encouraged business owners to continue paying workers who have to take time off to stay at home if they get sick because of the virus. He pointed to North Dakota’s workforce shortage and said “there is a market solution that is in favor of the employees right now.”

“If you don’t pay some employees and they stay at home for two weeks, there are 30,000 jobs open,” he said. “That employee is going to go work for somebody else that is willing to pay more for your time at home.”

Even though tests are still not widely available, we are going to demand workers to stay home for two weeks, people who may be economically hanging on by their fingertips? Then we’re going to just hope that their employers will pay them?

This is where a strict adherence to ideology moves from a set of ideals into realms of fantasy. A strictly free market solution to any facet of a serious pandemic is absurd. Exactly when are these quarantined people going to look for these other jobs? When they are sick and missing time? That’s not going to help a pandemic, but it is when they are going to need the money. Are they going to wait until after quarantine when they are now two weeks down in salary with new medical bills to pay?

But what about something billionaires should know about? What about the effect this pandemic will have on many small businesses? Are the thousands of these businesses really going to be able to pay workers throughout long quarantines? Many of these businesses are also going to greatly suffer through the economic chaos surrounding COVID-19. Many are also going to be devastated by the lack of customers and orders in the next several months. How are they going to have the financial resources to pay employees when they are already hemorrhaging cash?

In truth, they are not going to be able to pay them. Not without help. The basic tenet of capitalism is people use their resources in their own best interests and not the interests of the whole.

Thus ideology trumps logic or even basic compassion and makes smart people into idiots… And as always, it harms people relative to how close they are to the bottom of the economic ladder.

We currently have a Federal government that is perfectly willing to inject a trillion and a half dollars into the stock market but resists spending a small fraction of that to help working people to survive the coming crisis. While at the same time, we have a state government willing to talk a big game, but when it comes to the everyday working people and small businesses, their reliance on market based solutions is just the thoughts and prayers of the economic world.

What do we need to do?

Second, put the American people first and foremost in the planning. What is good for Wall Street is not what is good for the average working person. These everyday people are going to need help through the severe economic disruption that this event is likely to bring. Wage relief, job relief, and extended unemployment benefits are just the beginning.

Third and last, our leaders need to accept responsibility. Throughout Harry Truman’s presidency, he had a sign on his desk that said, “The Buck Stops Here!”

Our elected officials need to dig that out of a drawer and start living by it again.