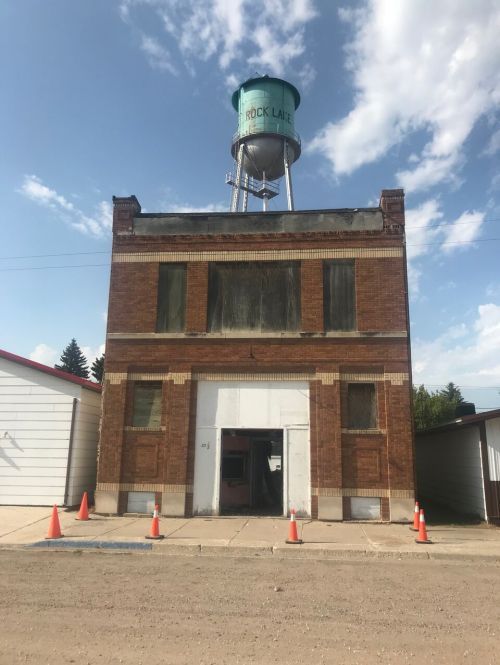 The first brick building had just gone up on the corner of the block. The government built that to house the post office, so it didn't mean so much. Not like this one; for a person to have the ambition to build a brick building of that size was an acknowledgement that Rocklake was no longer a railroad siding. Now, in 1907, Rocklake was a town.

The post office may have made it government-official before that, but the show hall made it community-official. The farmers that had worked for days at their barn raisings must have come to town and thought, "We've done good work, but by God that beautiful brick building, she's a beauty." And from when she was built, she was the jewel of the town.

She was built in a spirit of ambition, community, and a belief in the future, as were the families that came to populate these arid but fertile prairies. And for over a hundred years, She reigned over Main Street. the tallest building in town (not counting the steeple of the The Immaculate Heart of Mary Catholic Church, apologies, Father Jack). Yet in the 80s her strength began to wane, like the spirit and fortunes of the farmers around.

As families abandoned their homesteads, farms consolidated and the town was drying up and dying. The Show Hall was repurposed as a practice range for the Bow and Gun Club.

Old and forlorn as it had become, Rocklake didn’t die. Ambitious and buoyed by bumper crops, its progeny were given the option to try and make it better. And quite a few chose to take over their grandparents’ acres. This time they brought wives with them and soon after, children were born.

The school closed, but the school as the little brother wasn't going to go the way that his older sister did. Our fathers had suffered through that loss of her and weren't in a position to help when she needed it. They'd seen her die, but they would not let the town follow. This time it would be different. And by God, they saved the school building.

Soon kids will ride by and ask what used to be in that spot on Main Street. We'll tell them the story of the evening when they tore her down and 75 people came to watch and pay their respects. Then we'll go to the Locker Room Lounge, now in the school, and have a beer for her.

I should think that would be quite the opposite of those farmers that came in long ago from their barn raisings, but perhaps the kids will understand when we raise a glass to her, then smile and nod and tell stories about that time at the Show Hall when we went to school in Rocklake.