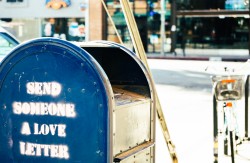 I recently had the privilege of visiting the traveling State Vietnam Wall Memorial. After viewing the wall and pondering the names of hundreds of servicemen and women from my state who gave the ultimate sacrifice for freedom, a few others stood beside me to view those names of honor.

I reached out and ran my fingers across the name of a young man whom I did not know, but he died in his youth while I have had the privilege to live a full life, so far.

After being affected somewhat by what my eyes had seen, I turned to the side to see the veterans who were seated behind a table. Roy, an ex-Navy man, asked me how I was. I said, "I'm having a good day." I wanted to go on to say, "because of the men whose names are on the wall behind me." I was a bit too emotional to tell him the rest of my sentence.

Roy soon told me that he has traveled, from time to time, with that wall for about five years. He said that in all that time he had not seen even fifty men remove their hats when they came to that wall.

How sad that hundreds of men gave their lives for us and tens of thousands of American men failed to even honor them enough to take off their hats.

Yours for those who gave their lives for us,