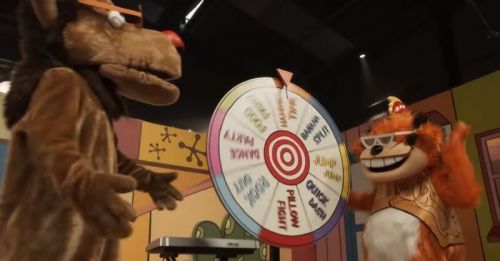 Marketed as “The Banana Splits Movie” even though the only on screen titles stick with “The Banana Splits,” Danishka Esterhazy’s bottom-shelf slasher flick marks the first R-rated adaptation of a Hanna-Barbera property since the dawn of the brand more than 60 years ago. A brazen attempt to cash in on the curiosity of audience members old enough to have enjoyed any of the 31 episodes of “The Banana Splits Adventure Hour” that debuted on NBC in 1968 and stretched until 1982 in syndicated reruns, the formulaic shocker is dispiritingly unintelligent and devoid of creative choices that might have successfully capitalized on the intriguing crossover of nostalgia-driven kiddie variety entertainment and the gruesome, Fangoria-ready prosthetic makeup and effects the movie offers in lieu of any characters motivated by logic or in possession of rich inner lives.

Positioned as a metanarrative in which the Snorky-obsessed Harley (Finlay Wotjak-Hissong) celebrates his birthday with tickets to a Banana Splits taping, the principal plot sticks with a flaccid variation on the Old Dark House formula. Harley and his family, including devoted mom Beth (Dani Kind), impatient pop Mitch (Steve Williams), and sullen older half-brother Austin (Romeo Carere), are joined by Harley’s classmate Zoe (Maria Nash) as members of the live studio audience. Harley’s unfortunate timing coincides with the impending cancellation of the series -- which has, in the movie’s universe, been running continuously for decades even though the single shabby set appears to have been stripped to its most barren look.

Esterhazy’s direction is consistently flat and uninspired given the nonstop opportunities for twisted weirdness, but the failure of the film can be pinned almost entirely on the sawdust-packed script by Jed Elinoff and Scott Thomas (which has also taken plenty of heat for similarities to “Five Nights at Freddy’s”). The list of grievances is lengthy, but the nadir has to be the self-sabotage stitched into the furry personae of the Splits themselves. By imagining Fleegle, Drooper, Bingo, and Snorky as computer-programmed automatons instead of costumed actors, the viewer constantly wonders why none of the show’s superfans ever notice, question, or comment on it.

Homicidal maniacs concealed within markers of childhood joy, fun, and comfort are a longstanding narrative tradition stretching at least as far back as the delectable house of candy and confections in the Hansel and Gretel folktale popularized by the Brothers Grimm in 1812. Earlier this year, a remake/reboot of “Child’s Play” -- a far more satisfying experience than “The Banana Splits Movie,” by the way -- traded on the very same themes. There is something wonderfully chaotic and subversive about the concept of TV show friends turned upside down, even if William Hanna and Joseph Barbera would certainly have detested the idea of the goofy animal rockers as flame, blade, and mallet-wielding monsters.

One expects to see continued genre flipping, crossovers, and mashups in coming years as the corporate ownership of dormant but copyrighted media franchises offers the promise of a low-risk financial return-on-investment via some built-in consumer recognition. Many Hanna-Barbera properties, now owned by Time Warner, have received the treatment in comic book form since 2016, when DC launched the Hanna-Barbera Beyond concept attempting to freshen and update legacy characters including Jonny Quest, Space Ghost, Fred Flintstone, Scooby-Doo, and others. The adjunct DC Meets Hanna-Barbera series, with inspired pairings like Aquaman and Jabberjaw, Superman and Top Cat, and Green Lantern and Huckleberry Hound, has one more remix you might like to investigate: the Banana Splits are recruited to rescue the Suicide Squad.