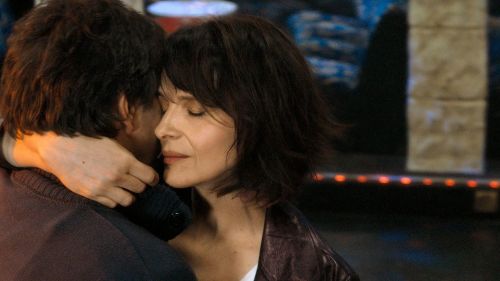 The sensational Claire Denis adds another wonderful work to her impressive filmography with “Let the Sunshine In.” An ode to many things, including restless hearts, the frustrations of romantic freedom versus security, the impossibility, and ridiculousness of the fantasy sold by the Hollywood romantic comedy, the anxieties of middle age, and several more, “Let the Sunshine In” is foremost a showcase for radiant superstar Juliette Binoche. As the unlucky-in-love Isabelle, a Paris painter who drifts from liaison to liaison with a questionable parade of partners unwilling or unable to make the kind of connection that Isabelle imagines will satiate her, Binoche is fearless.

Instead of manufacturing sympathetic markers to anoint and glorify her protagonist, Denis insists on portraying the self-doubt and insecurities that vex Isabelle. To that end, the presence of Binoche is a bit of brilliance that taunts and challenges the viewer; if Isabelle can’t find lasting, fulfilling tenderness and companionship, what chance do the rest of us have? Denis eviscerates the old adage “if you can’t handle or love me at my worst, you don’t deserve me at my best,” collapsing or inverting the very notion of what constitutes a woman at her “best” or “worst.” Denis’ clinical detachment somehow makes the “unlikable” Isabelle more accessible and alive.

The men who most certainly play well below Isabelle’s league are a comic bunch of narcissistic assholes and navel-gazers. Denis opens with a sweaty, heaving Vincent (Xavier Beauvois), a piggish and married banker, struggling to climax on top of Isabelle and follows shortly with an actor (Nicolas Duvauchelle) who spends more time discussing why he and Isabelle shouldn’t have sex than actually, inevitably, having sex. In the end, Denis sticks the landing with yet another interrogation of amour fou, inserting a just-jilted Gerard Depardieu as a quack psychic. The majority of his one scene with Binoche unfolds while the end credits roll.

Much earlier, following a deeply unsatisfying encounter with piggish, married banker Vincent (Xavier Beauvois), Isabelle returns home alone, struggling to remove the black, over-the-knee stiletto boots that she so often wears like sexual armor. Tearfully soliloquizing an “Am I with him? Or not?” conundrum awash in self-pity, we glimpse an Etta James sleeve decorating the wall behind Isabelle. Later, Ms. James’ transcendent “At Last” will factor on the “Let the Sunshine In” soundtrack in the film’s most referenced scene, but for now, we are reminded of the stark and ironic contrast between the pain, abuse, and addiction suffered by James and the angelic ballads given flight by her voice.

Isabelle’s privileged existence doesn’t match James’ suffering, but Denis moves to reclaim “At Last” from its cultural dilution in advertisements for products as unlikely as State Farm insurance and Hoover vacuum cleaners, and in films as far-flung as “American Pie” and “Inland Empire.” Isabelle dances with a seductive stranger (Paul Blain, looking all Robert Mapplethorpe) to the song in an encounter immediately following a blown-gasket tirade during an artist retreat (one of the movie’s most hilarious scenes), but we know the fantasy lasts only as long as the three minutes it takes James to sing it. Her lonely days far from over, Isabelle’s love has not, at last, come along.

“Let the Sunshine In” is now available on several streaming services.