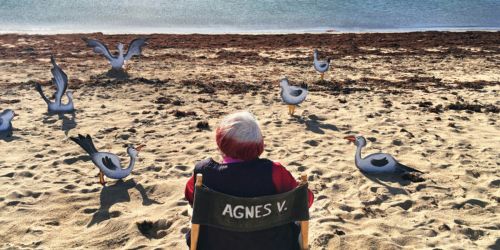 The death on March 29, 2019 of Agnes Varda concluded a career perpetually in bloom. The legendary artist and filmmaker, unmistakable in later years under her wonderfully cartoonish yet delightfully chic two-tone coiffure, was 90 years old but operated agelessly. Working to the end with future projects in queue, Varda shares directorial credit on swan song and retrospective “Varda by Agnes” with Didier Rouget. The pair of one-hour episodes combine clips with new images and selections from Varda’s live conversations in which she weaves a spellbinding monologue interspersed with brief appearances by special guests to ponder her three most meaningful words: inspiration, creation, and sharing.

Varda’s deeply personal and self-reflective nonfiction statements have inspired fresh generations of admirers to dig eagerly into her rich back catalog. As one of the French-language moviemakers whose work predated the Nouvelle Vague, Varda also directed narrative fiction. Not surprisingly, she notes her own preference for observing, including, and interacting with the “real” and the authentic. Commenting on her famous “Cleo from 5 to 7” (1961), a film that unveils Varda’s persistent interest in the fleeting and finite constraints of time and mortality, she highlights the incorporation of location photography and the presence of ordinary citizens as integral features of the filmscape.

For the viewers familiar primarily with Varda’s filmmaking, “Varda by Agnes” includes a tantalizing look at the polymath’s other artwork, a dazzling array of mixed and multimedia installations that often include, to one degree or another, a cinematic flair. Through each vignette, Varda’s voice provides context. She shares, like a beloved instructor, practical explanations of her ideas in a manner humble and unpretentious. Even though the source of this audio comes from on-stage public conversations and presentations in front of large audiences, the effect is magically personal and intimate. Varda’s enthusiasm for making is simply infectious.

Childlike wonder and insatiable intellectual curiosity fueled Varda’s six-decade career, and “Varda by Agnes” lays out in her own words the theories that fired the master’s desire to share. The vivid colors of cheap plastic -- which Varda loves even as she notes the catastrophic environmental impact -- are just as appealing as the mounds of heart-shaped potatoes discarded as aesthetically unfit for display-worthy grocery store sale. The latter are symbolic of the monumental importance of “The Gleaners and I” in 2000, a kind of turning point that paved the path to one of the finest latter-career filmographies in all of cinema.

Like David Lynch, Varda was an early adopter and supporter of commercial-grade digital moviemaking tools. Her endorsement of the freedoms afforded by the compact size of the handheld camcorders and the minimal cost per tape trumpet the D.I.Y. call to action. Varda said that she compiled the contents of what would turn out to be her final movie “not to stop time but to accompany time,” and the result for the appreciative viewer is nothing less than an audio-visual textbook that works in at least two ways: as a fitting obituary for Varda that gave her the opportunity to, in effect, participate in and conduct her own cinematic funeral, and as a kind of step-by-step manual for every aspiring movie maker, photographer, and artist who has dreamed of telling a story.