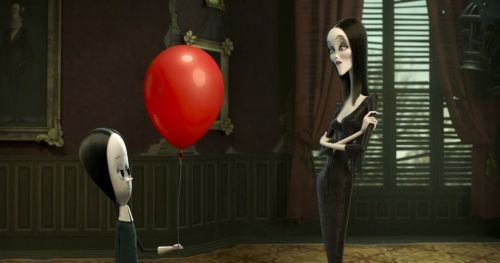 Admirers of previous television and film incarnations of Charles Addams’ legendary collection of macabre icons have another variation to contemplate, but the computer-animated feature from “Sausage Party” directors Conrad Vernon and Greg Tiernan fails to measure up to either the 1960s ABC series or the pair of Barry Sonnenfeld-directed features released in the early 1990s. Certainly, the new movie could be much worse, but very little of Addams’ brilliant satire is on display. The most devoted fans will appreciate the authenticity of the character design, which sticks closely to the look of the classic illustrations. The Nitrogen Studios tech, however, is a far cry from state-of-the-art Pixar, and the too-cheerful palette never properly evokes the monochromatic washes of Addams’ single-panel masterworks.

A prologue origin story takes the viewer from the old country wedding of Gomez (Oscar Isaac) and Morticia (Charlize Theron) to the New Jersey mansion -- here a derelict hospital for the criminally insane -- where the couple decides to settle down and raise a family. The imposing keep overlooks planned community Assimilation, a suburban collection of model homes built by HGTV-style cable host Margeaux Needler (Allison Janney). It is unclear why Needler never noticed the hulking structure before she decided to invest in real estate, and the filmmakers use her as a shrill and unpleasant antagonist in a toothless variation on the classic “the Addams encounter a square” plotline that inevitably points to a timely lesson about the value of tolerance in a xenophobic society.

One of the movie’s primary threads treats the bar mitzvah-like rite of passage identified as the “Sabre Mazurka,” an anxiety-producing test for son Pugsley (Finn Wolfhard). To the shock and horror of many townspeople, a small army of Addams clan members descends on the vanilla development to witness Pugsley’s special day, and the script uses the occasion to queue up the arrival of It, performed by Snoop Dogg in a slight spin on the character’s traditionally modulated gibberish. Using the simplified spelling introduced in the 1991 feature instead of the traditional “Cousin Itt,” the filmmakers mostly ignore the popular figure once he has emerged from his custom lowrider. The participation of Snoop, who also contributes to the track “My Family” along with Migos and Karol G, evokes the kitsch factor of the MC Hammer crossover “Addams Groove.” I hope that some enterprising scholar is at work on a thesis deconstructing the relationship of hip-hop to the Addams Family.

Unsurprisingly, the misadventures of the Chloe Grace Moretz-voiced Wednesday provide the movie’s most promising ideas, even if they don’t stick the landing. As full of woe as Christina Ricci’s incarnation, our morose heroine infiltrates the local junior high school in a kind of sociological experiment to observe the curiosities of the “normal” citizens and mean girls down the hill. Wednesday’s behavior worries Morticia, and the matriarch’s subsequent distress suggests that the mother-daughter relationship will be comprehensively addressed. It isn’t. The movie misses yet another golden opportunity when Wednesday befriends Needler’s daughter Parker (Elsie Fisher, stuck with dialogue a long way from “Eighth Grade”). Even when the two are briefly locked in a room together, the film can’t be bothered to give them the kind of revealing heart-to-heart that would add some much-needed depth and dimension.