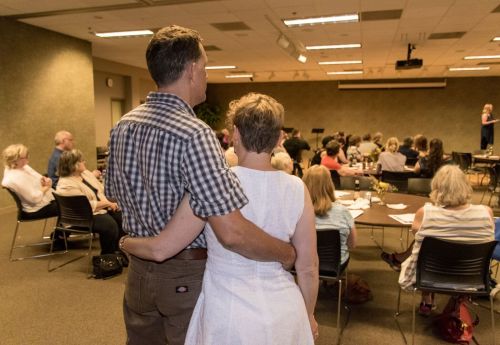 Last Tuesday I joined many local artists and audience members for Theatre B’s season preview at the Hjemkomst Center. As one of their board members, I see Theatre B regulars very often. But the annual preview always makes me realize how much of a community this organization has cultivated. Every August I joined with a variety of ensemble and board members, participating artists, and fans to learn about the upcoming season. All of us there because we have been impacted by a Theatre B production in the past. All of us there because we are invested in what they are working on in the future. And Theatre B fans have so much to look forward to with the upcoming 17th season.

The previews from upcoming shows were introduced by executive director Carrie Wintersteen and graphic artist Jeff Knight, premiering his artwork for each production. Also premiering was the branding, “Theatre for the Brave and Curious.” Looking around the room at all of the different actors, directors, designers and fans that phrase felt incredibly applicable. Then B previewed their upcoming season which is full of challenging shows feel designed to challenge brave and curious audiences.

The season opens with William Shakespeare’s “Hamlet.” The preview featured readings from cast members Tucker Lucas, Carrie Wintersteen, Pam Strait, Monika Browne-Ecker, Crystal Cossette and Doug Hamilton. Another cast member Missy Teeters introduced and provided context for each reading. It was thrilling to see familiar actors tackle such famous and powerful literature. The cast already demonstrates a strong take on their characters, it will be a real treat to see how they progress and interact. Theatre B focuses on contemporary works so it is always fun to see the ensemble put on something traditional. “Hamlet” opens September 27th and runs through October 20th.

The next preview was for a collaboration with the Plains Art Museum on a project called “The Other Four.” With art being so focused on visuals, The Other Four will highlight works focused on the other senses: taste, touch, sound and smell. Theatre B’s contribution is “Meditation Retreat: A Non-Visual Experience.” During the preview actress Maren Jystad-Spar played a spa instructor who had us close our eyes. Taking away vision provided an unexpected experience where we were solely focused on the actress’s voice alone. “Meditation Retreat: A Non-Visual Experience” can be seen November 8th, 9th and 10th at the Plains Art Museum.

The second mainstage show is “The Last Schwartz” by Deborah Zoe Laufer. I am directing this one and had the privilege of working with the ensemble of Mike Sunram, Monika Browne-Ecker and Jenni Lou Russi to put together the farcical preview. The show is a comedy about a distanced family gathered for a Yarzheit. The presented scene details a fight between siblings over a family coffee table. The preview was specifically focused on the comedy in the show, as the director I was so happy to hear the audience’s laughter brought about by the funny actors. “The Last Schwartz” starts November 29th.

Two familiar ensemble members then took the stage to share an awkwardly funny and familiar scene from “The Roommate” by Jen Silverman. “The Roommate” is a two person show starring Carrie Wintersteen and Pam Strait. The pair play new middle age roommates meeting for the first time and finding that they are incredibly different. The scene was full of insight about the way we struggle with regional differences. The duo of Carrie and Pam couldn’t be more entertaining and looks to make a great show. “The Roommate” opens February 7th.

The final show of the season is “The Father” by Florian Zeller. Doug Hamilton stars as an aging man with Alzheimer’s and puts us in his perspective as we see the world through his eyes. Missy Teeters and Mik Reid played different characters that the lead struggled to keep straight. We feel time moves differently as the old man gets confused in the middle of conversations. Hamilton was incredible, playing the humor of the situation and focusing on the person not the tragedy. But as the scene progressed we saw the character get more flustered and frustrated. This looks to be a powerful and creative show with an incredible lead performance. “The Father” opens April 24th.

As exciting as it is to peek into the organization’s future, it is refreshing to see how much B is focused on acknowledging their own history. Theatre B has made it to 17 seasons because of the support of so many ensemble members, guest artists and donors. Every year there is a winner announced for the Sheer Brilliance Award for people who have made an impact on the organization. The first winner was Mik Reid, an ensemble member you may have seen in shows such as “1984” and “Marjorie Prime.” Reid has been a strong supporter for Theatre B and is very active behind the scenes and in volunteering (you can often see him ushering or working the bar for shows).

The other two winners for this year’s Sheer Brilliance Award were Carol Kapaun Ratchenski and Laurie J. Baker. Ratchenski l wrote the original poems and shared her personal experiences that Baker turned into the play “A Beautiful Hell.” Last season Theatre B performed several readings of the original play and the project allowed B to share the work with other communities. Carol and Laurie put in so much work with the production and supported with finding a great audience.

The three winners fit Theatre B’s brand of theatre for the brave and curious. All of which are brave in their work with the arts and have worked tirelessly to create theatre for the curious. Just like so many of the attendees for the season 17 preview.

Theatre B is approaching their 17th year and the challenging shows are not slowing down. This season we are getting one of Shakespeare’s classics, a different sort of sensory experience, a family comedy about a distanced Jewish family, a dark comedy about an unlikely pair of women and a creative look at Alzheimer’s. If you are brave in your theatrical choices and curious about these offerings then you will definitely want to make sure to attend Theatre B this season.

[Editor’s note: Scott Ecker is on the Theatre B board of directors]