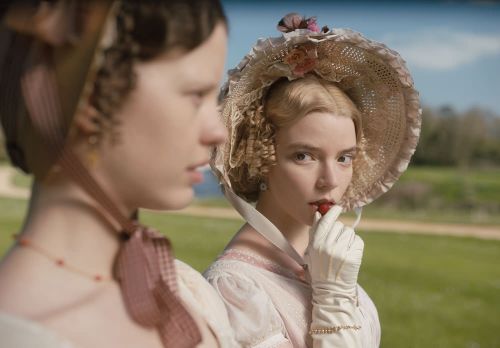 Photographer and music video veteran Autumn de Wilde makes a bold statement with her feature directorial debut, punctuating the title of the oft-adapted Jane Austen favorite with an emphatic period as if to suggest she gets the last word with this particular edition of “Emma.” Sumptuously designed, elegantly appointed, and spectacularly costumed and coiffed, de Wilde’s fresh rendition has a piquant flavor complemented as much by self-aware sexiness as the abundant pastel hues on display. Anya Taylor-Joy joins the ranks of confident Emma interpreters, handily managing and navigating the character’s meddlesome insensitivity along with her expressive capacity to learn from ugly mistakes.

De Wilde’s tone might not please every Austen purist, as the filmmaker opts more often than not for a kind of comedically arch and ironic detachment from what some critics have identified as Austen’s serious subtext: the high stakes of negotiating the most advantageous marital match in a sphere both limited and limiting for young women disadvantaged by patriarchal norms. The economic prospects of key female characters are most certainly not ignored by the director, however, who deploys Harriet Smith (Mia Goth, doing her best work to date) and Miss Bates (Miranda Hart, stealing every scene in which she appears) as important reminders of and contrasts to Emma’s own privilege.

As Emma’s longtime friend and eventual husband, Johnny Flynn makes a charming George Knightley. The novel’s sixteen-plus year gap between the pair isn’t too far off from the thirteen-year difference between Taylor-Joy and Flynn’s birthdays, but the common May-December convention and its typical Hollywood disparity isn’t too terribly obvious onscreen. De Wilde also capitalizes on Flynn’s physical beauty, working in a backside nude scene that would most certainly have scandalized Austen and her original readership. “Emma” is a movie of lusty gazes aimed in all directions, and de Wilde incorporates several scenes in which characters are elaborately dressed and undressed.

Emma and George remain fully clothed for the movie’s hottest interaction: a formal dance in which the opportunity to look and touch is briefly sanctioned. The scene is expertly handled by de Wilde. She manages to communicate the lightning-quick moment of discovery and surprise shared simultaneously by George and Emma as they realize they are into each other. The audience is equally caught up in the confusion and excitement, made all the more delightful by Knightley’s kindness and decency toward a harried Harriet. That gentlemanly behavior will come back to (briefly) bite Emma for her shabby and misguided treatment of her best girlfriend, but de Wilde, working from a script by novelist Eleanor Catton, smartly endeavors to update and excise Mr. Knightley’s tendencies to mansplain.

De Wilde’s penchant for Easter-egg color combinations calls to mind some of the opulence on display in Sofia Coppola’s “Marie Antoinette,” but “Emma” holds in check the boldest acts of blissful anachronism flaunted by Coppola. Both movies, at heart, are unafraid to embrace a rock and roll sensibility that acknowledges and powers a distinctly female point of view. Austen’s heroine, who arrived in December of 1815, was as flawed and complex then as she would continue to be interpreted across the centuries. Her fallibility, narrowness, and humanness coexist in equal measure with our fantasies of “handsome, clever, and rich” to make Emma so timelessly compelling.