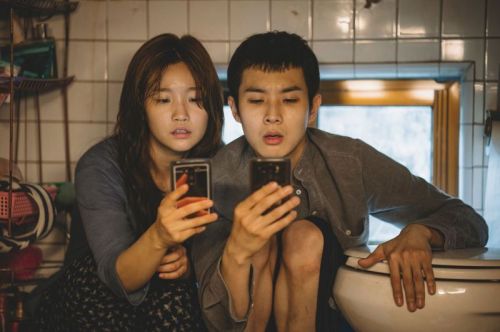 “Parasite” will be the top-grossing foreign-language film at the 2019 American box office, and deservedly so. Joon-ho Bong’s most satisfying and accomplished movie since “Mother” in 2009, “Parasite” is the first Korean film to win the Cannes Film Festival’s Palme d’Or. A perfectly-tuned, midnight-black fairy tale of two families -- one wealthy, one struggling -- Bong’s story treats poverty, class, and class warfare in parallel brushstrokes to the literal upstairs/downstairs and aboveground/underground picture painted by Jordan Peele in “Us.” The two movies would make a terrific double feature.

A deceptively simple infiltration plot explains the choice of title, as one by one, the brother, sister, mother and father of the just-scraping-by Kim family enter the employ of the wealthy Parks. The initial trick, of course, is that the Parks don’t know that any of the Kims are related to one another. Bong does Hitchcock proud by nudging us at first toward a sympathetic impression of the manipulators, convincing the viewer to excuse the violations of honesty and ethics in part because of the wide gulf between the haves and the have-nots. To Bong’s great credit, however, a dynamic begins to unfold that complicates any black and white stereotyping of rich and poor.

Bong is also a master builder in the specialties of composition and atmosphere, and one of the visual delights of “Parasite” is a study in contrasts framed by the massive windows in the two featured dwellings. The cluttered, garden-level rooms inhabited by the members of the Kim family look out past a clothesline of drying socks into a dirty street where a stumbling drunkard often relieves himself in full view. At the impossibly clean, architect-designed Park house, the living room also faces a huge glass wall, but this one observes the manicured lawn and sculpted hedge of a private backyard. Both of those giant rectangles are like movie screens, and what they reveal to the characters is as entertaining as any cinema.

Bong has many delicious surprises in store, and along the way stuffs “Parasite” with scenes that add wonderful little twists to well-worn tropes. Characters quickly scurry and scramble under beds and tables to avoid detection, and we hold our breath and remain perfectly still in solidarity with the hidden. In one such bravura moment, a horny Dong-ik Park (Sun-Kyun Lee) initiates some hilariously specific carnal contact with wife Yeon-gyo (Yeo-Jeong Cho) on the sofa while son Da-song (Hyun-Joon Jung) camps just outside in a tipi. Bong ratchets up the fear of getting caught by doubling it, and then tripling it, with some gonzo “Mission: Impossible” flair.

Like the Master of Suspense before him, Bong effortlessly blends the horrific and the comic en route to the icebox talk that has us questioning our own attitudes and beliefs through the unanswered mysteries of the story. The ridiculousness of the Kims folding pizza delivery boxes to make ends meet while a chemical spray of insecticide fogs them with “free extermination” contrasts sharply with the shocking events that will later release so much tension (and the toilet that will release so much sewage). Despite an overwhelmingly positive critical response to the movie, some writers have taken Bong to the task, ala Todd Phillips’ “Joker,” for making a simplistic faux-cautionary tale that cloaks aspirational fantasy in the guise of a more rebellious takedown of capitalism. Fortunately, “Parasite” is sophisticated enough to support more nuanced interpretations.