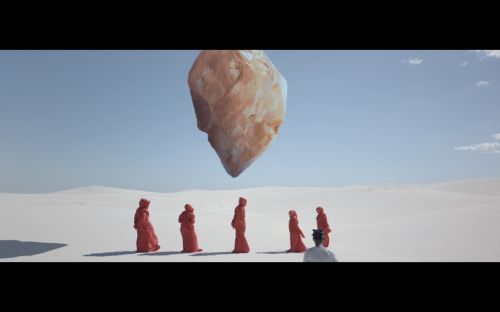 High Plains Reader spoke with the executive director of The Human Family, Sean Coffman, about the North Dakota Human Rights Arts Festival, and the special screening of eight experimental and animated films at the Fargo Theatre on February 20th. The Human Family promotes human rights and social justice through film and art. This is a free, one night only event -- the public is encouraged to reserve their spot, as seating is limited. Go to: https://tinyurl.com/uhzyykn. Good-will donations in support of the Human Family will be accepted.

HIGH PLAINS READER: Would you give us some background on the Human Rights Film Festival?
SEAN COFFMAN: This is actually the North Dakota Human Rights Arts Festival (the film festival takes place in the fall each year). The arts festival’s mission of the two events is the same: To educate, engage, and facilitate discussion around local and worldwide human rights topics through artists. The art festival invites artists of all mediums to participate, including experimental filmmakers and animators.

Where the art festival differs from the film festival is that we only accept films from experimental filmmakers and animators. Many of these films are from avant-garde artists using innovative techniques in storytelling to highlight human rights, civil rights and social justice issues. That is to say they’re not necessarily made for a traditional audience who expect to see a clean, linear story.

This is the third year for the art festival and we have a record number of artists participating in the exhibition - 67 to be exact. In addition to increased submissions in traditional mediums (painting, photography, ceramics) we had a record number of experimental films and animations submitted - and they’re really good. That prompted us to consider holding an actual theatrical screening of the films at the Fargo Theatre (the films are usually played in a loop on an HD monitor at the museum or gallery that is hosting us). This theatrical screening is the “Experimental and Animated Film Series”.

HPR: What was the selection process like for these particular films? Looking through the descriptions, the creativity is very impressive.
SC: We had a team of volunteer jurors review each of the films and select what they felt were the “best of the best.” The jury looked at the technical quality of the films as well as the content of the films to make their decisions. In the end, seven films were selected to be screened.

We had room for another short, and we invited local filmmaker Oscar De Leon to locally premiere his experimental film “Eviction.” Oscar will join us at the screening for a Q&A with him after his film.

In total, we have seven short films that will screen and one feature length animation. Two of the films, “Umbrella Dance for Hong Kong” and “Wardi (The Tower)” also received award recognition from the jury: Best Experimental film and Best Animation.

HPR: February 20th, the day of the screening, is also World Day of Social Justice. Can you share your feelings on the importance of recognizing that, in relation to the arts festival?
SC: We intentionally planned for the films to screen on the World Day of Social Justice. The content of the films - which ranges from foster children in the education system, to reflecting on the sovereign lands of Native American Territories, to the reflection of memory or identity for immigrants, to the protests in Hong Kong and the occupation of the State of Palestine - all speak to important, contemporary human rights issues or abuses. By bringing these films to screen on World Day of Social Justice, we have an opportunity to educate our community about the issues they address.

HPR: Is there anything you want to add, that the public should know about the festival?
The festival is supported here locally by a grant from the Arts Partnership and the Fargo Human Relations Commission. Statewide support for the festival comes from the North Dakota Council on the Arts.