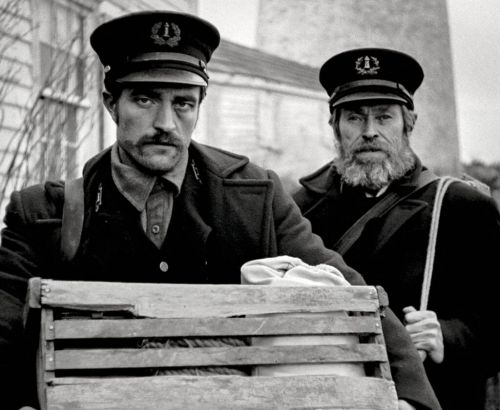 Fans of Robert Eggers’ brilliant feature debut “The Witch” have been waiting impatiently for “The Lighthouse,” and while the filmmaker decidedly avoids any kind of sophomore slide, the new movie will probably not attract the widespread fervor and devotion bestowed upon Black Phillip, Thomasin, and company. In “The Witch,” Eggers applied dialect evoking 1630s New England, and “The Lighthouse” follows suit with some wonderfully inscrutable 19th-century nautical nonsense. Brother Max Eggers co-wrote the screenplay, and a note in the end crawl acknowledges the variety of sources for the idiosyncratic vocabulary of Willem Dafoe’s Thomas Wake and Robert Pattinson’s Ephraim Winslow, the tortured souls whose sanity starts to leak at the coastal Maine location of the title.

While “The Witch” included well-placed smatterings of macabre humor, “The Lighthouse” will play as an outright comedy for many. The change in tone turns out to be Eggers’ finest trick, freeing the filmmaker from expectations to stick with the formula of serious, mounting dread. Fully committed, Dafoe and Pattinson are terrific fun together. The former’s Wake is an absolutely delightful caricature of every pipe-chomping, pop-eyed sea dog from Ahab to Horatio McCallister, and the latter’s “timberman” Winslow slow-boils to perfection at each new indignity and humiliation leveled at him by his superstitious, flatulent boss.

I certainly won’t be the only observer to wonder whether Eggers should be publicly thanking Guy Maddin for having already concocted the ultimate hallucinatory, black-and-white, silent film-inspired, lighthouse-set fever dream of mania and madness, but I gotta spill my beans: “The Lighthouse” owes a deep, seagull-fouled cistern of gratitude to “Brand Upon the Brain!” (2006). In a perfect world, some future programmer will set up a double feature and invite guests to attend in costume. Additional influences already identified by Eggers and others include Herman Melville (obviously), Ingmar Bergman, Fritz Lang, G. W. Pabst, Jean Epstein, Jean Gremillon, and Sarah Orne Jewett. It’s a deep bench.

“The Lighthouse” explores several classic themes of maritime literature: the burden of isolation from community, the dynamics of a complex superior/subordinate relationship, and the homoerotic impulses common to spheres from which females are excluded. The pathway connecting sexual fantasy and any-port-in-a-storm actuality is beautifully blurry. Both men express themselves in several ways as carnal creatures, and Ephraim’s vigorous, animalistic masturbation while fondling his hand-carved mermaid fetish is one of many ways Eggers expresses an almost tactile fascination with fluids. Spittle, vomit, fecal waste, and tears (from within) join nature’s lashes of rain and seawater (from without) as a constant threat to order and equilibrium.

“The Witch” may be the superior film, but “The Lighthouse” sees Eggers growing by leaps and bounds as a storyteller and visual stylist. The squarish frame magnifies the escalating emotional tension. Inky details and shadings of grayscale are intensified with the application of a custom orthochromatic filter. Dreamlike imagery hovers in the liminal passageway between ecstatic religious/mythological iconography and literal nightmare visions. Eggers is a major talent, and “The Lighthouse” -- like his feature debut -- inspires many conversations and invites multiple viewings.

As the story unfolds, Eggers almost effortlessly conveys our curiosities about the veil separating the corporeal and the ethereal. It doesn’t matter whether the film’s many supernatural encounters exist only in the imaginations of the lighthouse keepers. If we were in their place, Eggers argues, wouldn’t we also be as attracted to the dazzling illumination flooding from the Fresnel prisms in that tower’s carefully-guarded lantern room?