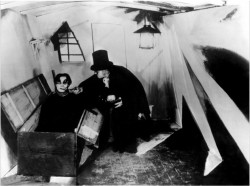 The movement in avant-garde modern art known as Expressionism began in Germany just over a century ago, shortly before and especially during and right after World War I. It employed harsh contrasts with distorted colors and angles to express an underlying psychological feeling rather than representing its subjects literally. By 1919, forward-looking German filmmakers began applying its anti-realistic ideas to movie production. The first major example and one of the most extreme is the heavily stylized psychological horror film “The Cabinet of Dr. Caligari,” directed by Robert Wiene in 1919 and released theatrically in Germany in early 1920.

The story is told largely as a flashback, with a character recalling the case of a carnival showman whose act was presenting a sleepwalker who could reveal the past and predict the future. Soon, however, a number of murders seem to be traced to the sleepwalker while under the hypnotic control of his master/employer, who goes by the name Dr. Caligari and eventually escapes the police into an insane asylum. To tell much more would spoil some of the plot twists that develop during the final reel, but the ending still retains a certain ambiguity absent from typical studio productions.

A box office hit in Germany, its international reputation was often stronger with critics and filmmakers than with popular audiences, likely due to its intentionally exaggerated artificiality in set design, makeup, and actors’ gestures, even though its narrative structure and editing techniques largely follow the conventional patterns established over the previous decade that still dominate cinematic storytelling today.

The film is not for every taste, by any means, but it has been undeniably influential from its premiere through the present. Classic Hollywood horror of the 1930s and 40s imitated its expressionistic set designs to varying degrees (notably “Son of Frankenstein”), and classic film noir mysteries of the 1940s and 50s adapted its principles for lighting schemes and camera angles. Current filmmakers continue to pay homage to “The Cabinet of Dr. Caligari.” For example, Tim Burton has almost exactly reproduced some of its visual elements in a number of his films, notably “The Corpse Bride,” and aspects of its plotline underlie the basic premise in Martin Scorsese’s “Shutter Island.”

The movie itself is easy to find online and in cheap video editions, but more often than not they are pale, crude representations of the film giving only a vague idea of what it looked like. Decent DVD editions of “The Cabinet of Dr. Caligari” came out in 1997 and 2002 from Image Entertainment and Kino Video, respectively, using earlier photochemical restorations from surviving 35mm prints.

Kino’s new Blu-ray release came out this week, using a brand-new 2014 digital restoration sourced mostly from the recently discovered original camera negative. Brief sections of missing footage (and the entire first reel) were inserted from various different 35mm release prints that have survived around the world and an old 16mm copy that preserved the original artistic German intertitles (presented intact on the Blu-ray, with optional English subtitles).

Picture quality on Kino’s Blu-ray is a true revelation, with textures and details visible that have always been obscured in later copies of copies of bad copies. There are still a few instances of dirt and minor scratches, especially during the first section (which is also slightly softer than the rest), but the majority of the film is astoundingly crisp and clear, considering what’s been available to see until now.

Audio is excellent on the two new music tracks provided for the film. The default (and best) score is a small orchestra accompaniment by the University of Music at Freiburg, Germany, in the style of early 20th century avant-garde music that fits the visuals quite closely. The alternate score was compiled by Paul D. Miller (also known as DJ Spooky), giving a blander, more modern background of generic avant-garde music, electronic noises, and occasional vocals, all of which (like the Giorgio Moroder rock score for “Metropolis”) might appeal to viewers more accustomed to MTV than to silent film and forms of classical and/or serious modern music.

The most impressive of the bonus features on Kino’s Blu-ray is a new 52-minute documentary, “Caligari: How Horror Came to the Cinema.” This gives an excellent overview of German history in the late 19th and early 20th centuries before delving into various artistic movements, then German cinema during and after World War I, with the last portion specifically about “The Cabinet of Dr. Caligari.” Also included is a gallery of photos and advertising materials, two restoration demonstrations, a trailer for this restoration and three other German Expressionist films available from Kino, plus a pamphlet with an essay about the film.