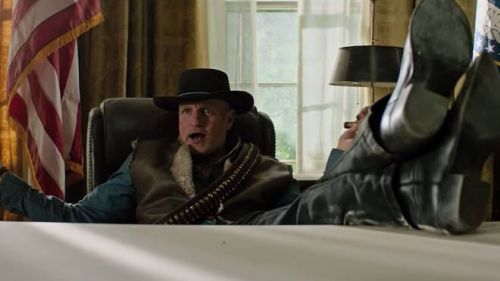 Ten years later, Ruben Fleischer returns to the apocalyptic landscape of his funny, fresh, and winning feature debut “Zombieland,” but the “Double Tap” fails to live up to the quality of the inaugural outing. The principal quartet of performers -- three Oscar nominees and one winner -- are game, but the screenplay by Dave Callaham and original writers Rhett Reese and Paul Wernick, leaves Tallahassee (Woody Harrelson), Wichita (Emma Stone), Little Rock (Abigail Breslin), and Columbus (Jesse Eisenberg) stuck in a familiar loop. Despite the warmed-up leftovers, the movie manages to locate a few bright spots, and none are more appealing than Zoey Deutch. As pink-loving, mall-dwelling moron Madison, Deutch manages the near impossible: she adds empathy and wit to what would otherwise be a broad stereotype.

The first “Zombieland” based much of its successful formula on self-awareness, and the sequel continues in that vein. Logic, however, is another matter entirely. Does it make sense that Wichita and Little Rock would pull up stakes and abruptly forge ahead on their own (making off with Tallahassee’s custom ride no less)? If belief is to be suspended, the now-grown younger sister seeks her first taste of romance while Wichita flees from a marriage proposal and the stale routine she shares with the safe and predictable Columbus. The couple’s bed barely has time to get cold before convenient placeholder Madison arrives to keep Columbus company.

The ensuing triangle mimics many of the tried and true conventions of the 1930s screwball comedy, especially its interest in the complications and/or love-and-hate riffs played out in classics like “Trouble in Paradise” and “Libeled Lady.” It may be a stretch to link a contemporary zombie trifle to the work of Lubitsch and Conway, but Deutch and Stone deliver their respective jabs with arch comic timing that often channels originators like Jean Harlow, Miriam Hopkins, and Myrna Loy. Some of the most entertaining scenes in “Double Tap” capitalize on Eisenberg’s hangdog expressions of guilt. Breslin, meanwhile, is treated as an afterthought. Separated from the core group, she disappears for long stretches.

In 2009, “Zombieland” already owed something significant to “Shaun of the Dead,” and the appearance in “Double Tap” of Luke Wilson and Thomas Middleditch as dead ringers for Tallahassee and Columbus ranks among the movie’s least inspired choices. Even worse is the inexplicable decision to set some of the action at the White House without even a trace of the kind of political satire that should have been centralized. Harrelson’s “nut up or shut up” barbarian so readily suggests a kind of Second Amendment MAGA parody that “Double Tap” practically begs for some kind of pertinent commentary that never materializes.

Most curious of all, “Double Tap” spends more time ignoring the clear and present danger of the undead to focus on the rambling road trip undertaken to retrieve Little Rock from a neo-hippie enclave called Babylon (pronounced Baby Lon by Madison). The safe haven is run by nitwits who inexplicably melt down any gun that makes it to the front gate. We are told that a new strain of resilient zombie poses a grave threat, and we witness one shoot-’em-up set piece to visualize that risk, but “Double Tap” is unconcerned with reanimated corpses until it reaches the expected conclusion.