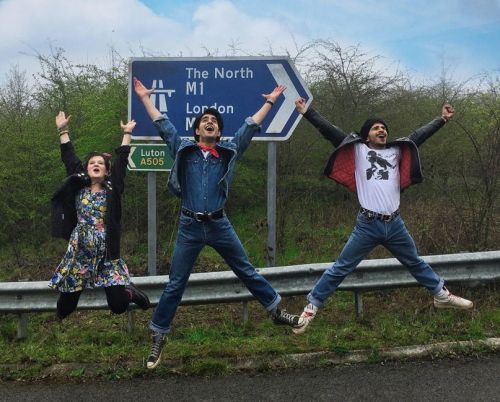 Based on a memoir by journalist and superfan Sarfraz Manzoor, the inoffensive music-themed bildungsroman “Blinded by the Light” licenses the songs of Bruce Springsteen to communicate the growing pains shaping the life of 16-year-old Javed Khan (Viveik Kalra) in late-1980s Great Britain. Javed, whose mother and father came to England from Pakistan in search of opportunity, contend with the genre’s familiar parental roles: exaggerated disdain for the “rebel” attitudes of their offspring and an unrealistic expectation for obedience at odds with the realities of being a teenager struggling to find a place in the world and a sense of identity.

Directed and co-written by veteran filmmaker Gurinder Chadha, best known in the United States for “Bend It Like Beckham” and “Bride and Prejudice,” the new movie extends Chadha’s thematic interest in the lives of immigrants from the Indian subcontinent who must navigate the challenges of the liminal space between their old world and their new one. The Thatcher-era setting of “Blinded by the Light” allows Chadha to draw parallels to the right-leaning, contemporary political landscape. The Khan family, based in Luton and barely making ends meet with unstable work at the local auto plant and home sewing jobs, suffers all kinds of racist humiliation.

Frustrated by the seemingly unfair demands of his father and the threats of local National Front and Nazi punks, Javed’s eyes and ears are enlightened by the sounds of “the Boss of Us All” when Sikh schoolmate Roops (a charismatic Aaron Phagura) shares his cherished cassette tapes. Javed is transfixed by the honesty of what he hears, instantly relating to the themes of struggle both economic and romantic. The otherwise unlikely positioning of New Jersey’s beloved son as a hero to Javed, a Pakistani teen from England, provides the film with its hook; the subtitle on some editions of Manzoor’s 2007 book “Greetings from Bury Park” is “Race. Religion. Rock ‘n’ Roll.”

Chadha cultivates a wholesome, old-fashioned tone that more often than not pushes the movie into territory that might (un)charitably be tagged as a big screen version of the Hallmark Hall of Fame ethos. Javed’s kind, caring, and supportive teacher Ms. Clay (Hayley Atwell) encourages her student to believe in himself as a writer. A taciturn, neighborhood World War II veteran delivers an unexpected message. Javed’s bubbly, supportive crush Eliza (Nell Williams) is as available and desirable as any Manic Pixie Dream Girl, though she at least pursues her own justice-focused political activism. There’s even a heartfelt school assembly speech with lump-in-the-throat, off-script declarations of truth.

Springsteen fans will appreciate the ways in which Chadha uses tracks like “Born to Run,” “Badlands” and “Prove It All Night” to argue for the transcendental, emotional punch of great songs as universe-altering touchstones. Manzoor has said, like all of us have felt about one artist or another, “This is my life. He’s actually singing about my life.” In some scenes, lyrics are represented as bold, oversized motion graphics -- the text swimming around the physical spaces occupied by the protagonist. Choices like this one will not endear the movie to the cynical, but the cynical are not Chadha’s intended target.